This week’s TTMYGH is going to be a little different.

After several weeks on the road and staring down a couple more, I am going to make an attempt to turn the presentation I have been delivering into written form, after many requests for a version that people can look at in the comfort of their own homes (and, presumably, without my annoying voice clouding the issue).

I’m hoping I can turn a very visual and fluid presentation into a more static one; but I’m sure that if I fail miserably, you’ll let me know.

This will make for a chart-heavy and consequently much longer piece than usual (though lighter on additional articles in the interest of saving your time and space this week), but let’s see if we can’t make this work.

The presentation, entitled “The Consequences of the Economic Peace,” is a look at the ramifications of several decades of easy credit and an attempt to draw parallels with a time in history when the world looked remarkably similar to how it does now.

So... without further ado, here we go.

The Consequences of the Economic Peace 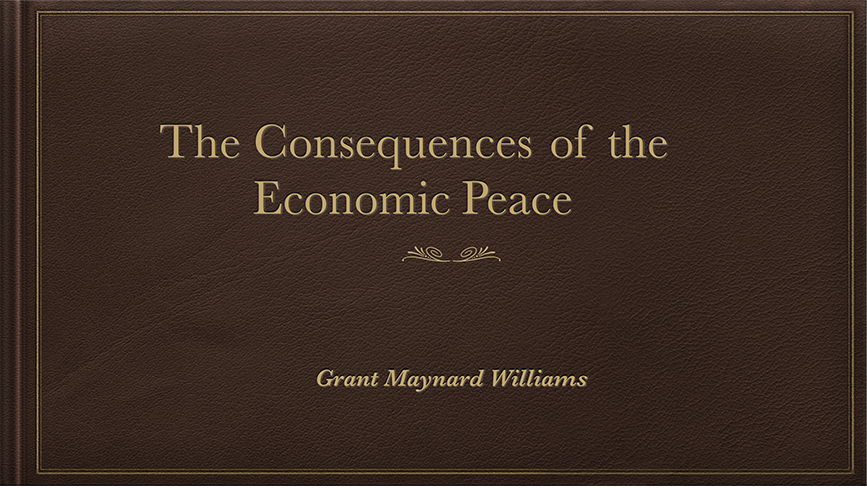 The 19th century was a time of upheaval right across the world.

There were no fewer than 321 major conflicts in a century which encompassed, among others, the Napoleonic Wars, the Crimean War, the US Civil War, the Boxer Rebellion, the Opium Wars, and the Boer War.

That single century saw no fewer than 52 major conflicts in Europe alone.

Britain, as the world’s preeminent superpower, was involved in an astounding 73 conflicts in that single 100-year span. In addition, France fought 50 wars and Spain fought in 44.

How crazy was Europe in the 19th century?

Well, Britain and France fought on the same side in six major conflicts; the Spanish and the French sided together on nine occasions; and Britain and Spain found themselves in alliance in seven different wars.

And people wonder why the EU is such a tricky proposition…

The serious point to be made, though, is that once it comes to war, former alliances count for nothing.

Anyway, as the 19th century made way for the 20th, Jan Bloch, a Polish banker, wrote a book entitled Is War Now Impossible?, in which he predicted that the lightning wars of the past — where cavalry ranks and infantrymen faced each other in hand-to-hand combat, deciding victory and defeat in short, brutal fashion — were to be replaced by drawn-out, grinding trench warfare.

“Everybody will be entrenched in the next war. It will be a great war of entrenchments. The spade will be as indispensable to a soldier as his rifle.”

But, despite Bloch’s dire predictions, the first decade of the 20th century was blissfully peaceful, with no conflicts between European powers anywhere on the continent.

By the time 1910 rolled around, however, political tensions were rising across Europe.

The Franco-Prussian war that had so inspired Bloch had led to the creation of a German Empire and the ascension of Wilhelm II to the German throne in place of arch diplomat Otto von Bismarck. It had also made the country more bellicose.

Russia, meanwhile, had lost most of its Baltic and Pacific fleets in the Russo-Japanese War of 1905, and that defeat had led to revolution. Defeat in the Far East forced the country to turn its attentions westward towards the Balkans — a region it eyed lasciviously — as did its old rival Austria-Hungary. 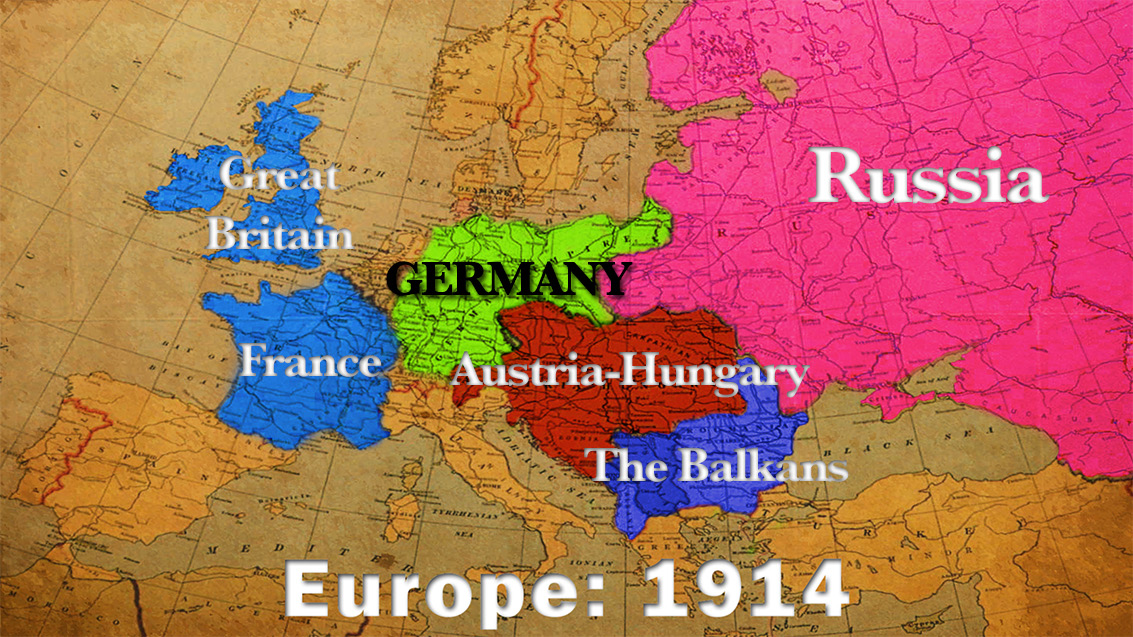 Meanwhile, in 1907, Britain and France had signed the Entente Cordiale, which finally put to bed a thousand years of almost continual conflict between the two countries (or at the very least reduced the “warfare” between the two to bouts of French impoliteness countered by silent indignance with some heavy tutting on the part of the British).

In 1908, Austria-Hungary had annexed Bosnia & Herzegovina; and in 1912 Serbia, Greece, Montenegro, and Bulgaria formed the Balkan League to challenge the Ottoman Empire.

After some classic in-fighting when Bulgaria turned on its allies (only to be defeated inside a month), the Balkan League emerged victorious — a victory that disturbed Austria-Hungary, who feared nothing more than a strong Serbia on her southern border. 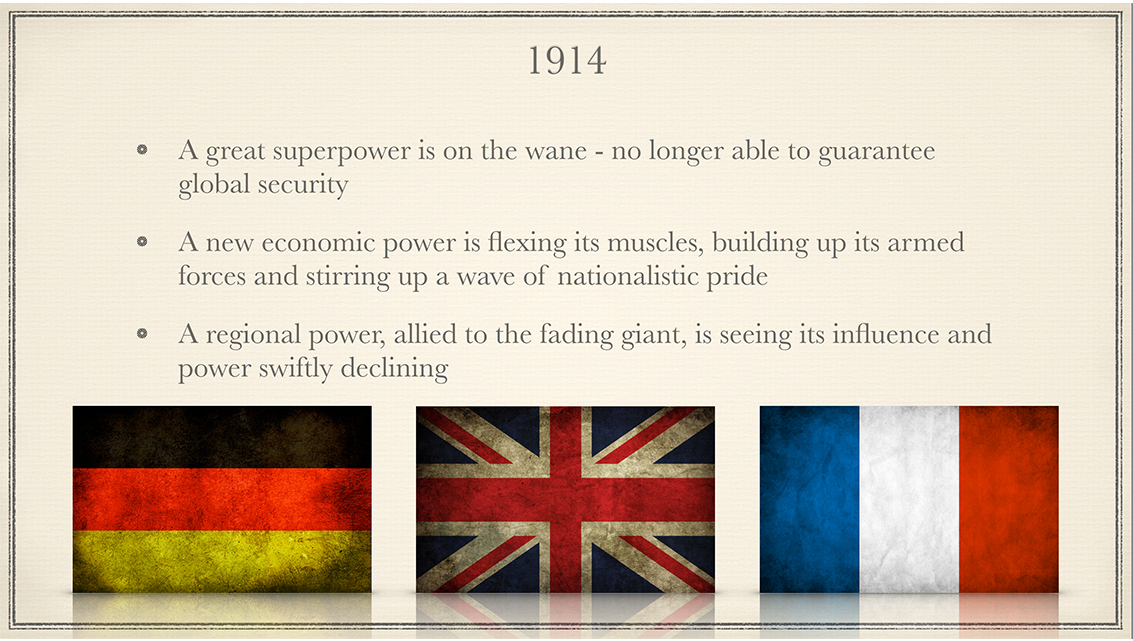 Great Britain, her power receding, was struggling to play the role of the world’s policeman; Germany, newly industrialised and ruled by a nationalistic leader, was puffing her chest out to the rest of the continent; and good old France was in steady decline and (no doubt painfully) reliant upon her old foe Britain for support.

And yet, despite such geopolitical turmoil everywhere, the man in the street was remarkably sanguine about the state of the world:

The projects and politics of militarism and imperialism, of racial and cultural rivalries, of monopolies, restrictions and exclusion, which were to play the serpent to this paradise, were little more than the amusements of his daily newspaper.

— John Maynard Keynes, The Economic Consequences of the Peace

Those words were written by none other than everybody’s favourite economist, John Maynard Keynes, in his book The Economic Consequences of the Peace, a publication which made him a household name all around the world.

It’s a sad indictment of today’s society that the only way for a modern-day economist to achieve Keynes’ level of fame would be to become a serial killer or marry a Kardashian.

But I digress... let’s get back to Europe in 1914. Despite the numerous mounting problems, as Keynes had pointed out, everyday life went on as usual — and the men and women of Europe in general and the UK in particular assumed that nothing untoward would happen.

Europe’s leaders would make sure everything got sorted out.

Then, on the 28th of June, 1914, amidst all the known knowns, a young man called Gavrilo Princip stepped up to a passing car in Sarajevo and with a single shot became a Black Swan that changed the course of history when he assassinated Archduke Franz Ferdinand of Austria.

I won’t go into the details of WWI at this stage; but in case you don’t know about it, I’m told there have been several books written on the subject (Barbara Tuchman’s The Guns of Augustbeing my own personal favourite). Anyway, after four years of warfare that tore the world apart like never before, a peace was finally reached.

But it was a peace which one man in particular vociferously condemned — and that man was John Maynard Keynes.

Keynes had left Cambridge University to work at the Treasury in 1915, and he had been hand-picked to attend the Versailles Conference as an advisor to the British Government. He was staunchly against reparations of any kind and advocated the forgiveness of war debts (yeah, I know… go figure); but as it turned out, his advice to focus on economic recovery was disregarded; and Keynes resigned his position, returned to Cambridge, and set about scribbling furiously in his notebooks.

In just two months, Keynes wrote the book that would make him a household name around the world — The Economic Consequences of the Peace.

In the book, Keynes was highly critical of the deal struck at Versailles, which he felt sure would lead to further conflict in Europe — describing the agreement as a “Carthaginian peace” — and with the passing of a surprisingly short period of time, he would be proven correct.

Click here to continue reading this article from Things That Make You Go Hmmm… – a free newsletter by Grant Williams, a highly respected financial expert and current portfolio and strategy advisor at Vulpes Investment Management in Singapore.