Editor’s Note: Stephen McBride is on the road this week, so we’re handing today’s issue over to RiskHedge Senior Analyst Justin Spittler. In it, you’ll read about an explosive trend you’ve likely never considered... and you’ll learn about the disruptive company that’s driving this trend forward as its stock soars to new highs.

How much would you pay to find true love?

Millions of Americans happily pay at least $2.99 a month to find love...

These love seekers subscribe to online dating services, which have exploded in popularity.

As you surely know, online dating is when two people connect over the internet before meeting in person.

As you might not know, early investors have made a small fortune off of online dating... and my analysis shows we’re still in the early innings.

It all started in 1995 when Match.com went live. Two years later, JDate—an online dating service for Jewish people—launched. Followed by eHarmony in 2000.

These services didn’t achieve success overnight. It took years for them to go mainstream. For a long time, most people thought online dating was weird. It carried a stigma.

That’s all behind us now…

More than 25 million folks will use one this month. That’s a 5.3% jump from last year.

If you’re in your in thirties and single like me, chances are you’ve tried out online dating.

My sister met her husband on eHarmony in 2010. Two years later, they tied the knot. They now have two children.

One of my best friends met his fiancée on Bumble—another popular dating app.

By 2040, eHarmony projects that 70% of relationships will begin online.

Meeting your soulmate online will be as common as ordering a pair of shoes off Amazon… or hailing an Uber on your iPhone.

There’s an important driver behind online dating you should understand.

They’re getting married and having kids much later in life.

As you can see below, the percent of young Americans who are single has shot above 50% for the first time since at least the 1980s. 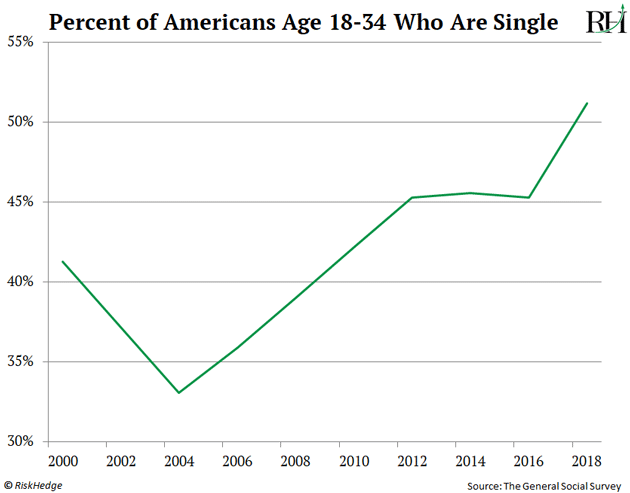 This is great for the online dating industry. It means millions more potential customers.

As I mentioned, it invented online dating when it launched Match.com in 1995.

Since then, it’s built out a portfolio of 45 dating services. This includes Match.com, Plenty of Fish, Hinge, and Tinder.

No other company can compete with its product lineup.

According to the company, 60% of people who met their significant other online did so on a Match Group product.

4.7 million people use it. In the past two years alone, Tinder’s user base has more than doubled.

In fact, in the first half of 2019, Tinder was the second-highest-earning non-game app in the world. It beat out much larger, more recognizable apps like Netflix and YouTube.

The beauty of Tinder is its simplicity.

It’s a breeze to set up. You don’t have to answer hard questions like “what do you look for in a mate.”

You don’t have to share lots of personal information. All you need to do is upload a few photos.

In short, Tinder “cuts to the chase.” After you’ve uploaded pictures, it shows you profiles of other people you might like.

If you both swipe right on each other, you “match.” At that point, you’re free to message each other.

About 15 million of those swipes turn into matches.

Helping people find love is a great business. The Match Group makes money by selling subscriptions and ads. Its subscriptions range from $2.99 to $40 per month.

And unlike many fast-growing tech stocks, Match Group is solidly profitable. Last year it booked a profit of nearly $500 million. That’s more than double its 2016 profit. 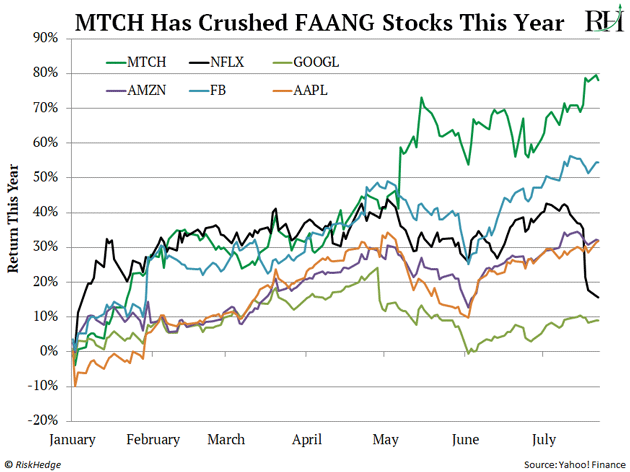 I expect Match Group stock to continue marching higher for a simple reason.

It has set its sights on global domination of the matchmaking market... and it’s going to succeed.

According to TechCrunch, there are around 600 million young, single people with access to the internet in the world. And two-thirds of them have never tried a dating app. Match Group is going to change that.

Although it has an iron grip on the US online dating market, its global reach is even more impressive. Its products are available in more than 190 countries and 42 different languages.

The Match Group is now focusing on other countries like India, Japan, and South Korea as key growth markets.

It’s spending more on marketing in these countries than anywhere else, and it’s paying off big time.

Tinder’s international user base has grown 23% over the past year. That’s twice as fast as its American user base grew.

Tinder is now the most downloaded dating app in India and South Korea. In Japan, it’s the fourth most popular. Pairs—another Match Group dating app—holds the #1 spot in Japan.

Over 1.5 billion people live in these countries. If Match Group can continue to replicate the success it had in the US in these giant markets, I see its stock easily doubling within two years.