“Growth is never by mere chance; it is the result of forces working together.”

“Strength and growth come only through continuous effort and struggle.”

The Yogi Berra quote above, which was brought to my attention this week, seems an apt description of where the markets and the economy are today. Nobody is quite sure where we are or where we’re going, but we all seem to think we’re going to get there soon.

I think it’s pretty much a given that we’re in for a cyclical bear market in the coming quarters. The question is, will it be 1998 or 2001/2007? Will the recovery look V-shaped, or will it drag out? Remember, there is always a recovery. But at the same time, there is always a recession out in front of us; and that fact of life is what makes for long and difficult recoveries, not to mention very deep bear markets.

The problem is that our most reliable indicator for a recession is no longer available to us. The Federal Reserve did a study, which has been replicated. They looked at 26 indicators with regard to their reliability in predicting a recession. There was only one that was accurate all the time, and that was an inverted yield curve of a particular length and depth. Interestingly, it worked almost a year in advance. The inverted yield curve indicator worked very well the last two recessions; but now, with the Federal Reserve holding interest rates at the zero bound, it is simply impossible to get a negative yield curve.

Understand, an inverted yield curve does not cause a recession. It is simply an indicator that an economy is under stress.

So now we are in an environment where we can look only at “predictive” indicators that are not 100% reliable. Actually, most are not even close. Some indicators have predicted seven out of the last four recessions. Some never trigger at all.

All that said, looking at data from the last few weeks suggests that we need to be on “recession watch.” Global GDP is clearly slowing down, and the data we are getting from the US suggests that we are going to see a serious falloff in GDP over the next few quarters. I want to look at the recent (very disappointing) employment numbers, earnings forecasts (and some funny accounting), credit spreads, total leverage in the system, and the overall environment where credit, which has been the fuel for growth, is under pressure. The totality of this data says that we have to be on alert for a recession, because a recession will mean a full-blown bear market (down at least 40%), rising unemployment, and (sadly) QE4.

The jobs report on Friday was just ugly. Private payrolls increased by just 118,000, which is about the minimum level needed for unemployment not to rise. Government payrolls added 24,000. There were serious downward revisions to the last two months, as well. August was taken down by 37,000 jobs, and July was reduced by 22,000. The last three months have averaged just 167,000 new jobs compared to 231,000 for the previous three months and 260,000 for the six months prior to that.

My friend David Rosenberg dug a little deeper into the numbers and noted:

Adding insult to injury and revealing an even softer underbelly to this report was the contraction in the workweek to 34.5 hours from 34.6 hours in August, which is effectively equivalent to an added 348,000 job losses.

So take the headline number, tack on the downward revisions and the loss of labour input from the decline in the workweek, and the "real" payroll number was [a minus] 265,000. You read that right.

He added: “Have no doubt that if the contours of the job market continue on this recent surprising downward path… [m]arket chatter of QE four by March 2016 is going to be making the rounds.”

While the unemployment rate remained at 5.1%, it did so largely because of a significant drop in the labor participation rate, which is not a good way to enhance employment. Further, the U-6 unemployment number is still a rather depressing 10%. Those are the people who are working part-time but would like full-time jobs, as well as discouraged and marginally attached workers. Very few part-time jobs pay enough to finance a middle-class lifestyle.

Analysts have been steadily cutting 3Q earnings projections, and those revisions threaten to make some richly priced stocks even more so. Thomson Reuters data shows analysts expect a 3.9% year-over-year decline in S&P 500 earnings. Expectations are falling for future quarters as well.

The headwinds are no mystery. China’s weaker import demand is hurting all kinds of companies, especially raw materials and infrastructure suppliers. Caterpillar (CAT) slashed its revenue forecast and announced 10,000 job cuts. That probably isn’t playing well in Peoria. Accompanying the falloff in Chinese demand is an increase in the number of containers coming into the US as the strong dollar allows us to buy more and sell less. Not a particularly useful combination.

I love this quote from a Reuters story:

“How can we drive the market higher when all of these signals aren’t showing a lot of prosperity?” said Daniel Morgan, senior portfolio manager at Synovus Trust Company in Atlanta, Georgia, who cited earnings growth as one of the drivers of the market.

As we all know, it is every portfolio manager’s job to “drive the market higher.” Daniel evidently wants to do his part.

Sadly, despite our best efforts, the stock market faces an uphill climb. More from Reuters:

Even with the recent selloff, stocks are still expensive by some gauges. The S&P 500 Index is selling at roughly 16 times its expected earnings for the next 12 months, lower than this year's peak of 17.8 but higher than the historic mean of about 15. The index would have to drop to about 1,800 to bring valuations back to the long-term range. The S&P 500 closed at 1,931.34 on Friday [Sept 25].

Moreover, forward and trailing price-to-earnings ratios for the S&P 500 are converging, another sign of collapsing growth expectations. The trailing P/E stands at about 16.5, Thomson Reuters data shows. Last year at this time, the forward P/E was also 16 but the trailing was 17.6.

The last period of convergence was in 2009 when earnings were declining following the financial crisis.

The Energy sector is the biggest drag on earnings, meaning that we now see analysts everywhere calculating estimates “ex-energy.” I suppose this produces useful information, but if we are going to exclude the bottom outlier, shouldn’t we exclude the top outlier as well? Healthcare is carrying much of the earnings burden for S&P 500 stocks, but I have yet to see an ex-healthcare or ex-energy & healthcare estimate.

A funny thing about earnings: they’ve been going up for the past year, even as top-line revenue has not. Generally, those go hand-in-hand. What’s happening?

And for the answer I have a story. A few years ago I made an assumption as to how a new stream of income would be taxed. I made that assumption based on my knowledge of having had similar income in the ’80s and ’90s. It turned out the rules had changed, and I hit the end of the year owing what was for me a rather large sum, as I was also trying to finance and build my new apartment.

I told my tale of woe to my accountant, Darrell Cain, who obviously detected the distress in my voice. He smiled at me and said, “John, I have an elephant bullet.” He reached under the table and pulled out an imaginary elephant bullet. “This is a big bullet. But I only have one of them. Once you use this bullet you can never use it again. If another elephant comes down the road, there will be nothing you can do.”

And yes, there were some one-time tax maneuvers that reduced my taxes to a manageable number. But as he said, those were a one-time option.

There is no way to prove it, but I think corporate accountants have been using up their elephant bullets this past year, as corporations want to be able to maintain the fiction that earnings are rising, so that price-to-earnings ratios don’t come under stress and cause stock prices to fall. You can move expenses from quarter to quarter, put off certain spending, recharacterize certain expenses one time, and so on. I deeply suspect we are going to find that some recent corporate earnings have been of the smoke and mirrors type.

The Commerce Department will release its first estimate for 3Q US GDP on Thursday, Oct. 29. By then we will be in the thick of earnings season and will already know how many companies performed.

In the big picture, income (corporate or individual) can’t grow unless the economy grows. GDP may be a flawed way to measure economic growth, but it is the best tool we have. Blue-chip estimates right now are that it ran at near a 2.5% annualized growth rate last quarter. However, the Atlanta Fed has sharply revised their GDP estimate for the third quarter down to under 1%. (See chart below.)

Will economic growth come into harmony with income growth? We know they have to meet eventually. At present, it appears GDP will stay in slow-growth mode. That means it probably won’t be able to pull earnings up with it. 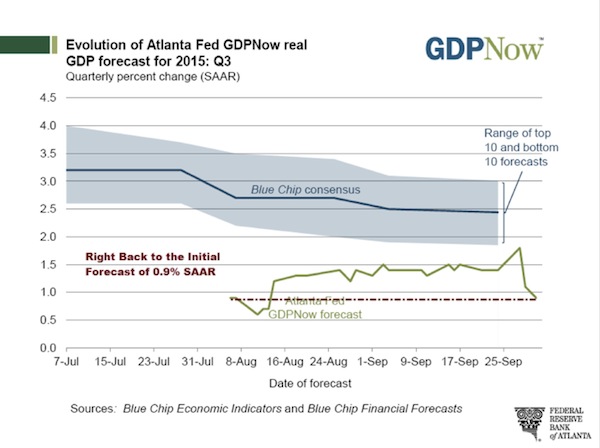 High-yield spreads have been tightening and interest rates have been rising for some time. This is starting to cause some distress in the high-yield (otherwise known as junk bond) market. My friend Steve Blumenthal has been following and timing the high-yield market for 20 years. He recently wrote the following, which I’m going to blatantly cut and paste as it clearly depicts the level of distress in the high-yield market. If credit becomes more difficult to get, then growth is going to come under stress as well. I note that corporations that I think of as issuing higher-quality debt are paying 10%. Thank you very much. Ten percent interest rates don’t seem to me to be very low.

To continue reading this article from Thoughts from the Frontline – a free weekly publication by John Mauldin, renowned financial expert, best-selling author, and Chairman of Mauldin Economics – please click here.