John Mauldin took the stage on day 2 with a powerful message: while the human brain struggles to anticipate exponential change, our economic future quite literally depends on a race between two accelerating curves – debt and innovation. 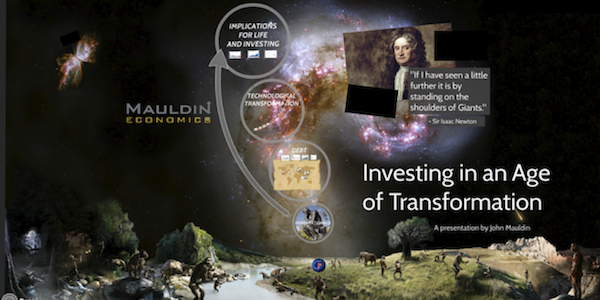 Just as exponential growth in government debt starts to destabilize the global economy – with enormous and growing risks to growth and productivity in Japan, the United States, Europe, China, and even many of the emerging markets – John believes the constant doubling of computing power since the late 1950s has brought us to the point where our technological capabilities are taking exponentially larger leaps every year. That constantly accelerating computing power is enabling innovation so profound and disruptive that it looks and feels like magic.

The question John asks is, “Can the private sector innovate and create wealth faster than governments and central banks can destroy it?” We are optimistic that the human race will continue its march forward in the coming decades, but bad policy can stifle innovation and hurt us economically. Ultimately, John’s question will need to be answered on a country-by-country basis… and the distinguished speakers who followed John today gave us a lot of additional food for thought as we contemplate the path ahead.

Former Speaker of the US House of Representatives Newt Gingrich asserted that the pioneers of the future (the dreamers, innovators, and entrepreneurs) will eventually break out past the prison guards of the past (irresponsible and overprotective governments, central bankers, and special interests). Ultimately the rising tide of productivity growth will allow our economic future to transcend past experience, but those gains will be unevenly distributed during the transition – continuing to fuel a political shift from right to left.

We heard a similar view from former President Reagan’s most-quoted living author, George Gilder, who argued that the study of economics must evolve and embrace the lessons of information theory, as he outlined in his 2013 book Knowledge and Power: The Information Theory of Capitalism and How It is Revolutionizing Our World. Mr. Gilder draws a brilliant insight from the way information like phone conversations, emails, and video is transmitted. The electromagnetic spectrum, he argues, is a completely predictable carrier, governed by speed of light. The information it carries, on the other hand, is highly unpredictable. It takes a low-entropy, no-surprises carrier to reliably transmit high-entropy, surprising content. If the carrier itself were to introduce a lot of noise into the signal, our communications would be a jumble.

These ideas from the fields of physics and information theory have extremely important implications for public policy in an age of accelerating technological transformation. In order for innovation to thrive, productivity to surge, and living standards to dramatically rise over the coming decades, we need “low-entropy" legal, regulatory, tax, and monetary policy, and stable institutions to implement it. Too much noisy interference from governments and central banks that distorts market incentives and increases the hassles of doing business can stifle innovation and discourage entrepreneurship. That’s why it is so critical for governments around the world to understand the technological transformation in progress and to actively pursue the reforms their economies will desperately need to participate in the new global economy.

That’s a worrying dynamic if we pay attention to the Heritage Foundation’s Stephen Moore, who harps on the distortions in public policy, or if we consider Hoisington Management’s Dr. Lacy Hunt, who explained to us today that, in aggregate and contrary to popular belief, total debt-to-GDP across the world’s major economies has INCREASED by nearly 35% in the years since 2008. And even more importantly, the new debt has been taken on disproportionately by the real problem economies: Japan, the Eurozone, and China. 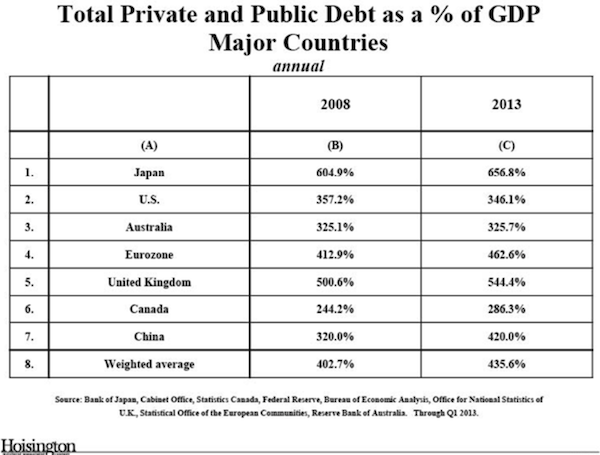 With a powerful grasp of an enormous body of academic research (and armed with some hard-hitting discoveries of his own), Dr. Hunt warns that debt deflation – not inflation – is the biggest near-term risk. While inflationists like to chant Milton Friedman’s famous mantra “Inflation is always and everywhere a monetary phenomenon,” Lacy pulled back the curtain on Friedman’s lesser-known research and explained that the famous characterization of inflation ultimately depends on stable or rising monetary velocity… sans sufficient monetary velocity, inflation does not materialize. I really need to think through Dr. Hunt’s research to a greater extent and plan to spend a lot of time reviewing the conference recordings in the coming weeks. (You can do so, too, by ordering the SIC MP3/CD Audio Set at our discounted pre-event price. It’s available here.)

Dylan Grice largely concurred with Dr. Hunt. In his thoughtful outlook for a breakdown in international monetary cooperation, instigated by Japan’s dangerous move toward tit-for-tat central banking, Dylan warned that the world’s central banks are drifting into a dangerous prisoner’s dilemma.

In one of those wonderful moments that happen only at a conference of this quality, Dylan mentioned in conversation later in the day that a Minsky-like inflationary moment can absolutely happen if velocity (rather than interest rates) skyrockets. Paul McCulley had already claimed, in his lunchtime address, that major governments with control over their own printing presses do not have Minsky Moments, but he later had to concede that Dylan could be right in the event of a major policy error.

In the coming weeks, John and I are going to rest up a bit, then revisit the conference, dig into the research, reorganize and expand on our thoughts, and bring you some provocative new ideas.

Once again it is time to hit the send button. Ian Bremmer is walking us through his geopolitical outlook at the moment, and the crowd is hanging on every word. I don’t want to miss it!

Have a great day, and I’ll send you another recap tomorrow.