Here we are… another year and another reset of our year-to-date performance figures.

For many investors, a reset couldn’t have come sooner. After all, 2022 was the worst year for stocks since 2008.

Even bonds, represented by the Bloomberg Aggregate Bond Index (the “Agg”), decreased 13%. It wasn’t pretty for nearly any asset class.


Now, could things turn around in 2023? For certain stocks and sectors, absolutely. We’ll cover the one sector I suspect will outperform all others in a moment.

But first, let’s talk about inflation…

The first storyline for 2023 really emerged at the end of 2022. That is, inflation—as defined by the Bureau of Labor Statistics—is beginning to cool.

I told readers back in September that our inflation nightmare would flatline in six months. I took a lot of heat for that. Many readers didn’t believe it. But it was obvious then, and it’s obvious now.

A quick recap: Shelter represents one-third of the weight of the CPI-U. Shelter is a quirky calculation based on rent and “owners equivalent” rent, which is a way to approximate inflation felt by homeowners.

The shelter calculation is a lagging indicator. Home prices and rent prices have been falling for the past few months, and yet these declines aren’t showing up in the inflation reading. At least, not yet.

But it’s starting to filter through, and I expect we’ll see it really start to show up in March 2023. 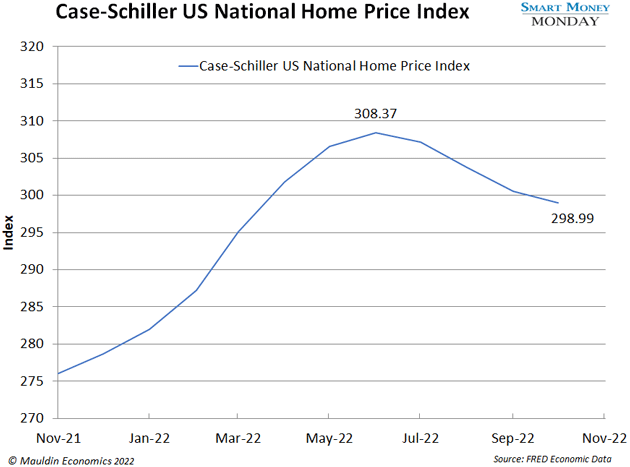 Another area where prices are set to cool is with retailers.

These companies simply have way too much product. Target (TGT) and Lululemon (LULU) saw their inventories grow 14.4% and 84.5% year over year, respectively. Expect discounting as they work to clear existing inventory, which is deflationary, not inflationary.

And at the ports, well, the backlog of containers is gone. And container shipping rates? Back to normal.

Same story with many other commodities.

In short, inflation is cooling, which leads me to storyline #2…

It’s hard to imagine, but exactly one year ago, the federal funds rate was 0%.

This critical interest rate is a key input to the entire global financial system. Yields on bank deposits, mortgage rates, auto loan rates, and many more are derived from the federal funds rate.

Since March 2022, the Fed has hiked interest rates a total of seven times. And there are likely a few more hikes on the horizon.

But we are much closer to the end than the beginning. With inflation cooling, the Fed really doesn’t have much reason to keep hiking, in my view.

Markets don’t like uncertainty. How can you value an asset today if interest rates rise another 500 basis points, or 5%, in the next nine months?

The reality is you can’t. Or at least, it’s very hard to get excited.

Pausing the hikes is good for markets. And it’s good for stocks.

Now, which stocks in particular?

Closing the Large- and Small-Cap Gap

The S&P 600, as I’ve written many times before, is extremely cheap. This is a basket of profitable small-cap stocks.

Right now, the S&P 600 trades for just 12.5 times the next 12 months’ earnings per share. That’s cheap on an absolute basis. In fact, it’s the cheapest it’s been since the financial crisis.

In 2023, however, I expect to see material outperformance from smaller companies versus those in the larger S&P 500.

I can even envision a scenario where the S&P 600 trades for a higher multiple than the S&P 500. After all, small caps generally grow faster than large caps… which means higher multiples.

Because, for this year, lower inflation and the end of rate hikes could mean a resurgence of small-cap stocks.