“Invest in what you know.”

You’ve likely heard this advice before. People often attribute the idea to investing legend Peter Lynch, the former manager of the Magellan Fund at Fidelity Investments.

And there is something to it. If you’re a doctor, you’re in a better position to spot great opportunities in biotech. If you’re a farmer, you might have better luck investing in commodities like corn or soybeans.

Or maybe you just love Lululemon (LULU) yoga pants so much you bought the stock when it IPO’d in 2007. That would have been a solid move. It took a while to gain momentum, but today, Lululemon has climbed 2,170% above its $14 IPO price.

Even Lynch said as much to The Wall Street Journal:

“I’ve never said, ‘If you go to a mall, see a Starbucks and say it’s good coffee, you should call Fidelity brokerage and buy the stock.’”

In other words, there’s more to investing than buying companies that make products you like.

FarmVille has tens of millions of active daily users. So, it’s not hard to imagine devoted gamers buying shares of Zynga when it IPO’d in 2011. Plus, Zynga is actually a solid company. Leading up to the IPO, sales grew over 3,000% from 2008 to 2010. 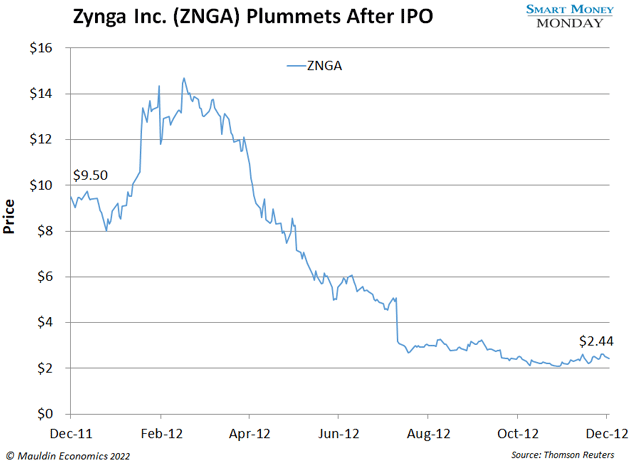 And Zynga stayed in the gutter for a long time. The stock didn’t reach its IPO price again for nearly 10 years.

My wife and I are both big fans of their On Cloud running shoes, and we’re not even runners. I’m about to buy my third pair.

They’re just great shoes. And I’m not the only one who thinks so. I see them everywhere. And, as I’ve mentioned before, On’s sales are set to grow 35% a year for the next 5 years.

But popular shoes are not enough to make me buy the stock. And I’m glad I haven’t… yet. The company went public in September at around $35 a share. Now it’s trading around $24.30, or 30% lower.

You make your money on the buy. Meaning you want to buy a stock when it’s cheap.

I’m confident in On Holding as a business. But the valuation doesn’t make sense. At one point, it was valued close to Under Armour (UAA), which is just silly. Under Armour is a scaled, profitable athletic apparel powerhouse that generated $4.5 billion in revenue in 2020. On Holding, on the other hand, only generated $460 million in revenue that year. And it hasn’t even turned a profit yet.

In short, the stock is overpriced. So, it doesn’t matter how much I like the shoes. If it sinks to $15 or lower, I’ll likely take another look.

Last week Zynga announced that its gaming competitor Take-Two Interactive (TTWO) was acquiring the company for $12.7 billion in cash and stock. Take-Two will pay $9.86 per share, or a 64% premium over Zynga’s January 7 closing price.

Zynga has shot up 50% on the news. So, anyone who bought shares in the past few months is pretty happy. They’re starting off 2022 with a nice, juicy gain. 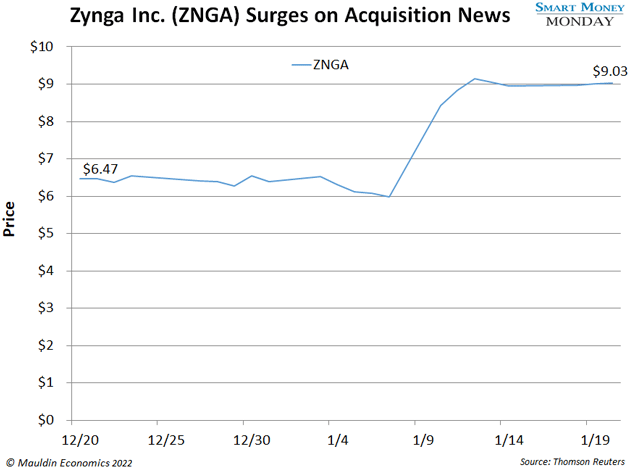 Unfortunately, those FarmVille-loving investors who bought in near the $9.50 IPO price won’t have much to show for it.

Whether it’s video games, running shoes, or coffee. Sure, it’s a good jumping off point. But the biggest factor driving your investing success is whether you buy on the cheap.