He didn’t create a new industry, invent a new biotech drug, or launch his own spaceship.

Instead, he’s an older French guy. And for a while this year, he was actually the #1 richest person in the world, briefly topping Jeff Bezos and Elon Musk.

Arnault has built a fortune selling fancy things to other rich people. And he’s delivered major profits to LVMH shareholders in the process. The stock has skyrocketed 727% over the past 15 years. That’s nearly triple the S&P 500’s 250% return over that period. 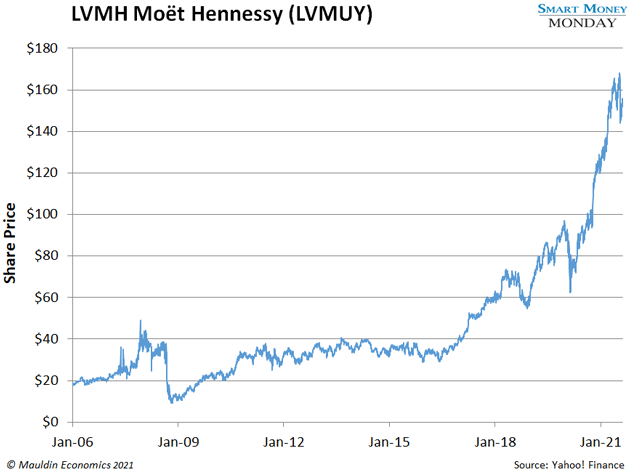 LVMH is a rare bird—there are only a handful of publicly traded luxury companies.

Another reason is that luxury spending has been growing for years. This is partly because, yes, the rich are getting richer. But also because of the growing wealth of consumers worldwide.

Regardless of where you live, a big part of “keeping up with the Joneses” is showing that you have money. A new $5,000 handbag is one way to do that.

Richemont owns high-end jewelers like Cartier and Van Cleef & Arpels, watchmakers Piaget and Montblanc, and an assortment of other luxury brands.

Like LVMH, Richemont has delivered sizable gains to shareholders. Its stock has shot up over 330% since 2009. 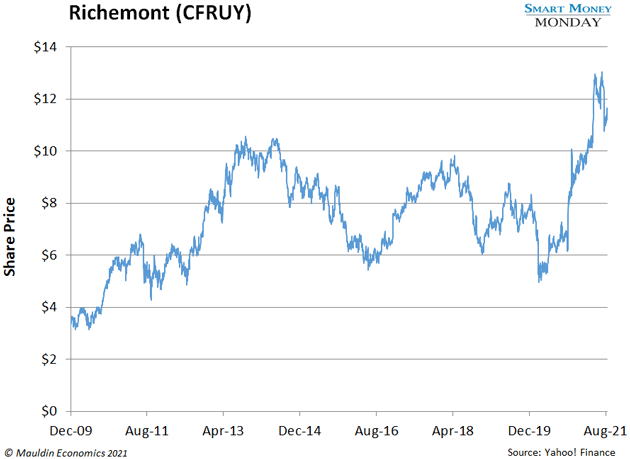 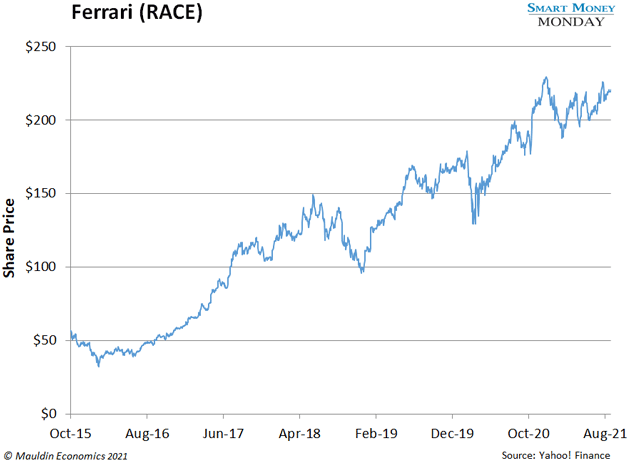 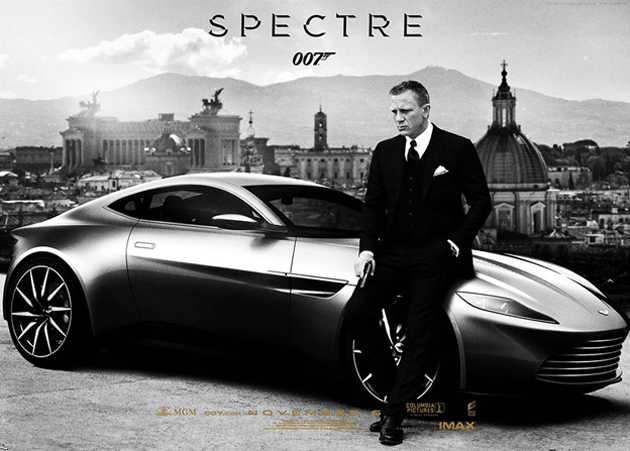 Aston Martin went public in 2018. And frankly, it’s struggled quite a bit since—shares are down over 80%. Part of the problem was the old owners. They borrowed too much money. And they didn’t have the right product line.

By early 2020, Aston Martin was on the verge of bankruptcy. But the company has started to make a remarkable turnaround, thanks to Canadian billionaire Lawrence Stroll. And I expect the stock price to do the same.

In January 2020, Stroll took a sizable stake in Aston Martin, agreeing to purchase up to 20% of the company. Since then, he’s fixed the company’s balance sheet. So, it has plenty of cash now. And it’s on track to successfully roll out its new luxury SUV, the DBX.

As an added bonus, Aston Martin is getting millions of new eyeballs on its cars through the Aston Martin F1 racing team.

Keep in mind, Ferrari is the only other pure-play ultra-luxury car stock. And it currently has a $41 billion market cap, while Aston Martin’s is hovering around $3 billion.

I doubt Aston Martin will be as big as Ferrari anytime soon. However, if the company hits its earnings projections (and my research indicates it can), it could soon be worth $10 billion or so.

This stock is not without risk. That said, it’s an iconic luxury brand, with a billionaire dealmaker pulling the strings, and 4X upside potential. I own shares of Aston Martin, and you should consider buying some, too.

P.S. Please send over any questions you have on luxury stocks—you can reach me at subscribers@mauldineconomics.com.