Regular ol’ businesses can make you a ton of money.

That’s solid growth. And when a company doubles its operating income like that, its stock price should roughly double, too. But that is not what happened. Instead, AutoZone has soared 659% since 2011. 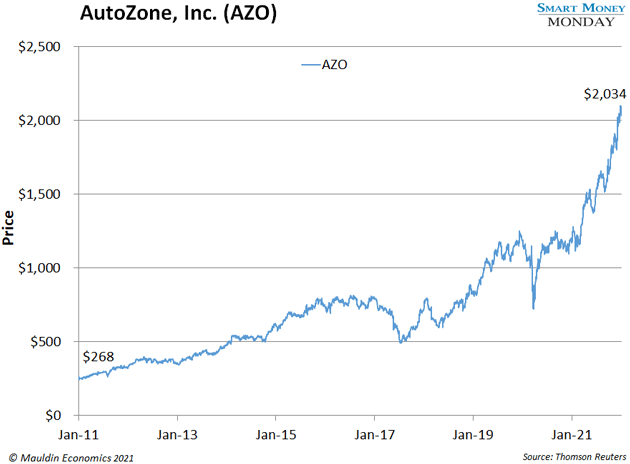 Sure, those impressive returns happened during a historic bull market. But AutoZone more than doubled the S&P 500, which rose 273% over the same period.

Share buybacks. Since 2011, the company has repurchased over half of its shares, cutting the number of shares outstanding from 45 million to 21 million. 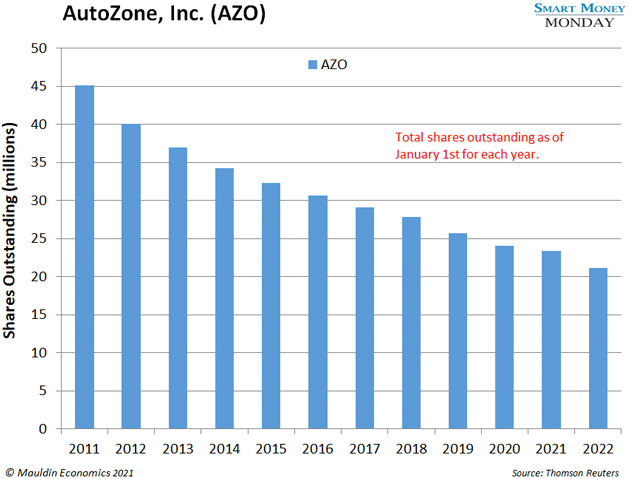 Buybacks, as you probably know, are one way a company can deliver value to shareholders. It’s pretty straightforward: The company buys back shares, often at depressed prices, which reduces the total number and pushes up the price of the remaining shares.

In this issue of Smart Money Monday, I’m going to recommend another company that sells a bunch of ordinary stuff… a household name that’s absolutely gushing cash. And the best part is, it’s set to “AutoZone” its stock with buybacks.

Let’s get one thing out of the way: eBay is not an outdated online flea market. You can buy a lot of the same stuff on eBay that you’d find at Amazon (AMZN) or Walmart (WMT). And most of those items go for full price.

Because unlike Amazon or Shopify, the stock is cheap. For 2021, earnings should land around $4 per share. The stock is currently trading around $65, or a very reasonable 16 times earnings. But it’s even cheaper when you factor in eBay’s hidden assets.

Together, eBay’s investments are worth $25 per share. If we back that out of its $65 share price, eBay’s “core” is trading for $40 per share—or around 10 times earnings. Meaning it’s screaming cheap. But I don’t expect that to last.

Since 2019, eBay has repurchased 20% of its shares, cutting the number of shares outstanding from 856 million shares to 665 million.

I expect eBay to continue to use nearly all of its free cash flow to repurchase shares. For 2021, stock repurchases should come in near $7 billion. And by 2025, I see a clear path for the company to cut its share count below 500 million.

This is a great setup. The business is a firmly established cash cow. The stock is cheap. And share buybacks should help push the price much higher. I own shares of eBay, and you should, too.

P.S. EXPIRING TODAY: Upgrade to our most elite club—The Alpha Society—and get full credit for all of the subscriptions you already have. Today you have one more chance to book your savings and claim access to all of our finest research—for life! Click here now to view your unique offer.

Add the Amazon of South Korea to Your Watchlist

Don’t Buy BABA. It’s Not What You Think

Why This Pullback Isn’t Rattling Me