Economic growth isn’t random. It comes from individual decisions to buy, sell, or do nothing. We all make dozens every day.

Corporate CEOs and CFOs make bigger decisions, like whether thousands of people get hired or a factory gets built.

This being the case, the economy generally does better when business leaders see growth opportunities, and worse when they don’t.

Right now the latter is happening. We know why, too: President Trump’s erratic trade policies make long-term planning difficult, to say the least.

If you spent decades building a transoceanic supply chain and are now unsure the US government will let you use it, then your best bet is to postpone investment decisions until you have clarity.

Allowing “clarity” isn’t in the Trump playbook. But without it, every path leads downhill. 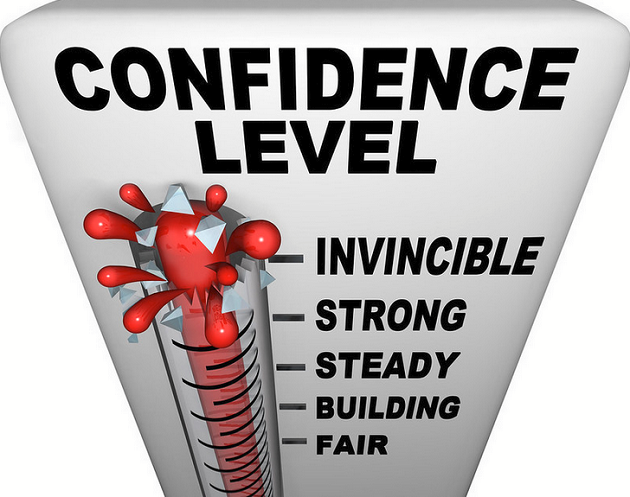 (Curious disconnect here. Why are these CEOs hiring if they don’t expect higher sales and aren’t willing to make growth investments? I don’t know. One explanation is they are trading expensive workers for lower-paid ones, but that’s just a guess).

Still, for now, the survey doesn’t point to recession. It’s consistent with other surveys like the NFIB Small Business Optimism Index, which shows weakening but not collapse.

On the other hand… confidence can drop fast. Notice in the chart how CEOs were still relatively optimistic well into 2008—about like they are now. Then they suddenly weren’t. 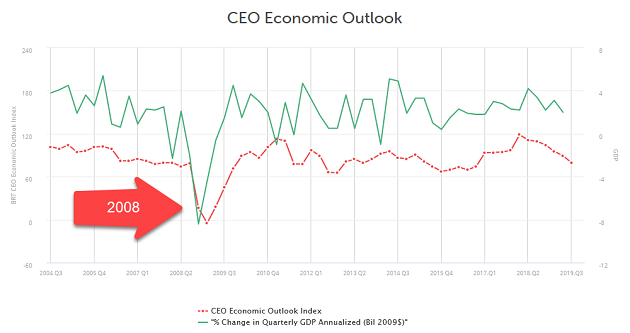 A new Duke University survey of chief financial officers isn’t comforting, either. Some 55% of finance chiefs became more pessimistic last quarter. They predict less than 1% capital spending growth over the next year. The CFOs say “economic uncertainty” is now their biggest concern.

From where does this uncertainty emanate? We don’t have to look far. 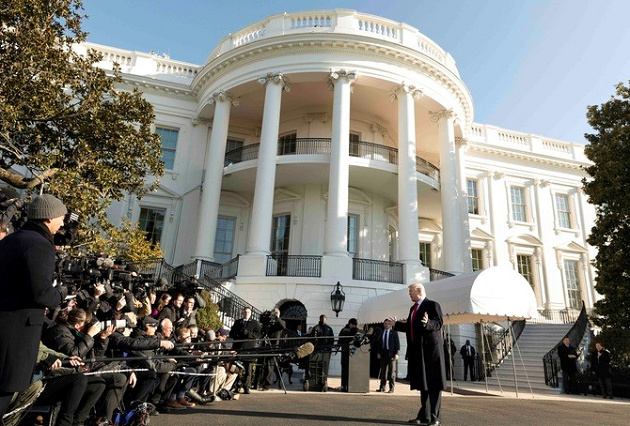 One of Trump’s first trade moves was to “help” American steel producers with import tariffs.

That was last year. How are they doing now? Here’s a Sept. 18 Bloomberg headline.

Since the Trump administration announced tariffs last year, domestic steelmakers’ shares have slumped, partly on concern that trade tensions with China threatened global economic growth and demand for the commodity. Now, there’s evidence that those fears are being borne out, with U.S. Steel Corp., Nucor Corp. and Steel Dynamics Inc. all warning this week on third-quarter profit outlooks.

So look what happened. Tariffs “protected” American steel producers from foreign imports. But the tariffs also threatened global growth and steel demand. The tariffs hurt US companies more than they helped.

But it doesn’t stop with the steel industry. Bloomberg interviewed a trader who described the problem well.

“All of these trade battles that are going on are creating uncertainty for everyone at every level, all the way from the manufacturer down to the end consumer,” Randy Frederick, a vice president of trading and derivatives who helps oversee $3.7 trillion in assets at Charles Schwab in Austin, Texas, said in a telephone interview. “And uncertainty always breeds complacency, which ultimately is going to stifle demand for things like steel.”

This is what I keep saying. Tariffs aren’t the main problem. They’re not great, but businesses could adapt.

The real problem is no one knows what to expect next. This makes business planning impossible and, as that trader says, stifles demand.

In a rational world, the powers-that-be would see their strategy isn’t achieving the desired results, and try something different. Unfortunately, it isn’t happening that way. More like the opposite.

The conservative billionaire Koch brothers—who support Trump on many other issues—have been using their political network to argue against the trade war. Last week, they admitted it isn’t working.

“The argument that, you know, the tariffs are adding a couple thousand dollars to the pickup truck that you’re buying is not persuasive,” a senior Koch official, who declined to be named, said during a briefing in New York. “It doesn’t penetrate with the people that are willing to go along with the argument that you have to punish China.” (CNBC)

That’s another way of saying the Trump base is all aboard. Other surveys show even suffering Midwest farmers often still support agricultural tariffs. 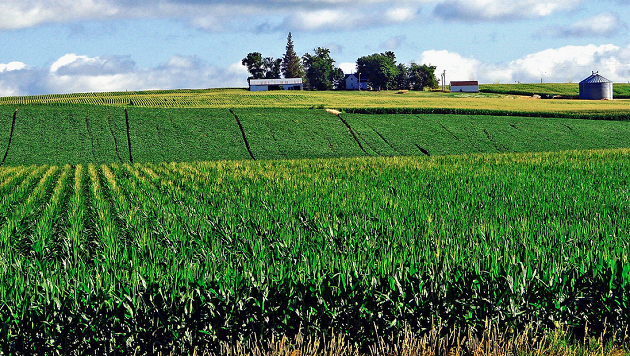 As I’ve said before, shared adversity tends to unify people, especially when they have a charismatic leader like Trump. So the base is rock-solid.

But you know who else will be rock-solid behind Trump’s 2020 campaign? The same Koch brothers who hate his tariffs.

Think about it. Are the Kochs or other conservative activists going to support a Democrat against Trump? No way.

Nor will most business leaders. They may dislike some Trump policies, but they have even more issues with any Democrat. As sometimes happens (tragically) with abused spouses, they will stay with Trump no matter how badly he hurts them.

This gives Trump wide latitude to do whatever he wants, and a trade war is clearly high on his list.

Eventually, this will push the US economy into recession, which probably won’t help Trump. But he’s ready for that, too. He will blame recession on Jerome Powell and the Federal Reserve.

Very little can stop this trade war, and it will probably get worse. That means business confidence will keep falling. Recession will follow.

Some folks know this and think they can handle it. We will know soon if they’re right.