We all want to know the future. Unfortunately, the future isn’t talking. It’s just coming, like it or not.

We can, however, make educated forecasts. I think John Mauldin is broadly correct: the future is bright, but we’ll go through darkness first.

In fact, many of us are already in pretty dark situations, “left behind” in a supposedly thriving economy. We’re told there is no inflation even as the real cost of living rises ever higher.

Where is it leading us? To answer that, we have to think about how we got here. 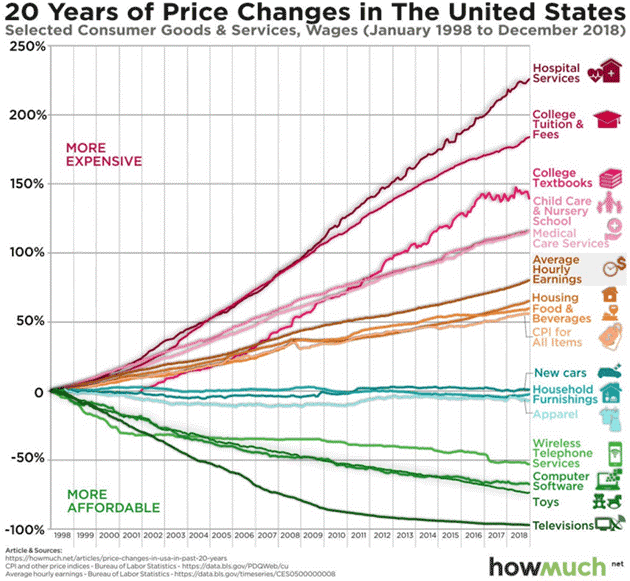 The cost of things average people must buy—healthcare, education, housing—tends to have risen more than wages did over the last two decades.

But aggregate inflation measures, like the Consumer Price Index, don’t show this. Falling prices elsewhere held them down. Those tend to be “luxury” goods… which is why inflation is no problem unless you’re poor.

My friend Bruce Mehlman had a different reaction on Twitter.

He’s right; the fastest-rising spending categories are things you can’t easily import from other countries. If you suddenly need surgery, you’re going to the nearest hospital pronto.

On the other hand, US hospitals and colleges do import certain components and personnel. That’s why we have foreign-born nurses and professors. It doesn’t seem to have reduced their costs, though.

Bruce’s latest slide deck is about global trends re-shaping the world. He distilled his outlook into a two-factor equation: globalization vs. regionalization, US-centric vs China-centric. 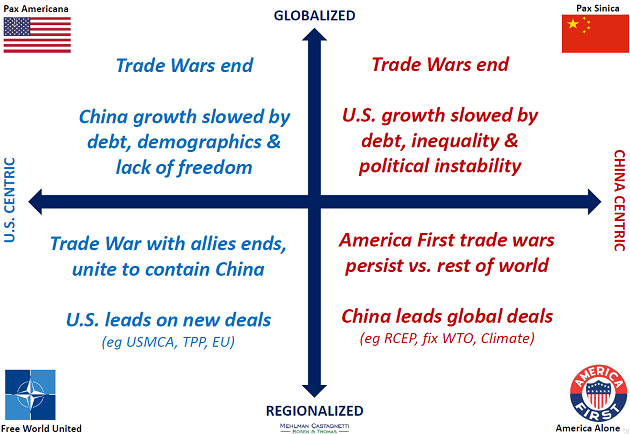 I realized long ago that globalization was on its last legs. I also think trade conflict will continue and even intensify. So Pax Americana or Pax Sinica (the top two quadrants) aren’t very likely.

The bottom left scenario—what Mehlman calls a “Free World United”—would be a partial end to trade wars, with the US and its allies uniting against China. That might happen but not without a leadership change in Washington. And maybe not even then.

So the “America Alone” scenario within an otherwise China-centered world seems the most likely. For Americans, this will probably mean even greater economic difficulties than we face now.

How people who are already struggling will deal with it is unclear. But it probably won’t go well.

Recently in our Over My Shoulder service, I shared a report by Gavekal Research co-founder Louis-Vincent Gave called “The Knowledge Revolution and Its Consequences".

Louis has a great way of systematically thinking through a situation to see where it leads. He thinks technology and political trends are aligning against mega-powers like the US and China. His key points:

The conclusion is that future growth potential should be highest in smaller countries with stronger, more flexible political institutions. The US, China, and most of Europe don’t qualify. Places like New Zealand and Switzerland have better odds.

That brought to mind one of my favorite Enlightenment philosophers, who happens to have been Swiss. 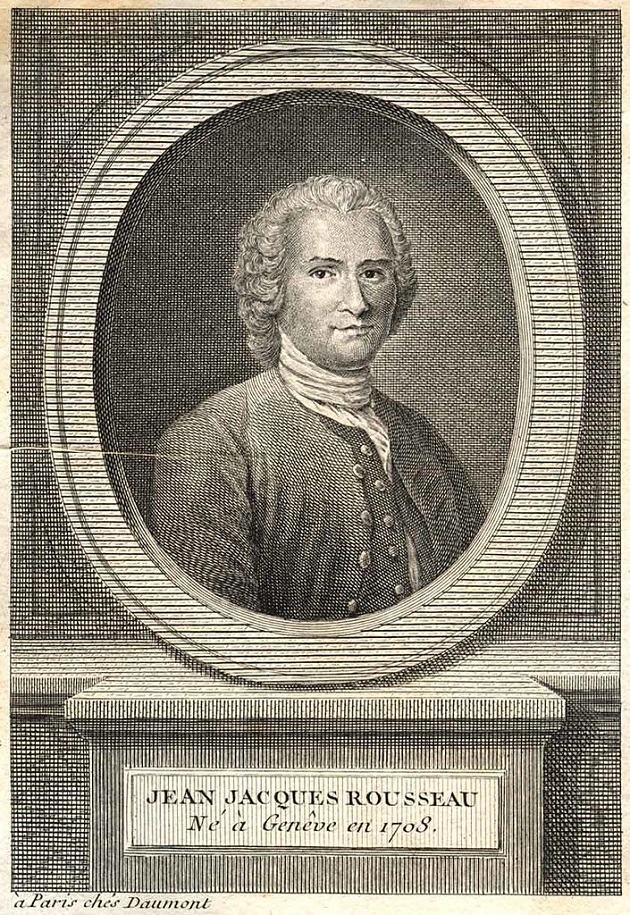 Eighteenth-century thinker Jean-Jacques Rousseau wrestled with how to preserve individual freedom when we also have to depend on each other for survival.

Rousseau saw politics as a social contract between a sovereign and citizens. What we call “government” is the interface between them.

The sovereigns of Rousseau’s time were mostly kings, but he envisioned a democracy in which the people collectively were sovereign. But then he ran into a math problem.

In a tiny democracy of, say, a thousand citizens, each possesses one-thousandth of the sovereignty… small, but enough to have a meaningful influence.

Each individual’s share of sovereignty, and therefore their freedom, diminishes as the social contract includes more people. So, other things being equal, Rousseau thought smaller countries would be freer and more democratic than larger ones.

How do we reconcile that with democracy in a US composed of 330 million citizens? I’m not sure we can. It worked pretty well for a long time but maybe, as population grows, the math is catching up to us.

If so, the options are a non-democratic US or a smaller US. Or maybe no US at all.

This land we now inhabit wasn’t always the United States. Nothing requires it to remain so. At some point, it will develop into something else.

When and how that will happen, we don’t know yet. But we know it will.

The solution to “the more people = less influence math problem” has always been to organize into guilds, unions, parties etc. In that sense more people can compensate by voting as blocks that in turn are better equipped and organized.

China is a relative homogeneous people and its government has in the last 30 years pulled millions out of poverty, not the other way around. Sure it is not a democratic country, but that is how they govern, - with great efficiency allowing them to pull off world class infrastructure projects in a blitz. As long as there is decent progress and prosperity in China, I think their Confucian model of state ship can sustain the country as it has well back into the past when it was called dynasty and not the communist party.

The problem I see with the young experiment we refer to as America is that it used to act more like a nation - not by ethnicity - but by ideals. The country could unite behind large institutional investments, be it social programs or nationwide infrastructure, let alone win two world wars…and send a man to the moon. It was never a homogeneous country, yet managed to compensate by a very strong idea of “Americanism” which today has turned quite fragmented because there are no longer and overarching agreement about what America is and should be. Who holds the patent ?

The other weakness likely tied to the fragmentation and de-nationalization in ideals are when national level decision making are offered to the highest bidder, leaving decisions to be short term, benefiting a narrow scope, versus long term and strategically benefiting the nation and its populace at large.