Every month, the government publishes inflation data. And with every report for the last decade, we’ve marveled at how low it is.

Those reports are a top reason Federal Reserve officials have kept monetary policy historically loose. They thought inflation was under control.

Official aggregates don’t reflect price inflation as most people experience it because few of us are “average.” We all have our own unique circumstances and spending patterns.

New research shows these differences aren’t random. Inflation affects some groups far more than others. Policies that don’t recognize this will be ineffective at best… and might make matters worse for everyone. 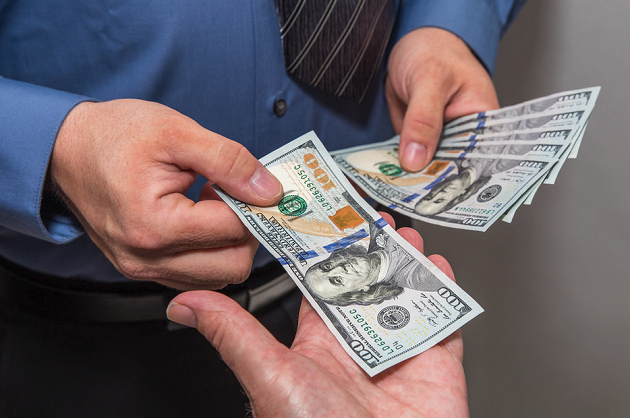 Depends Who You Are

Ask most economists about inflation, and they’ll tell you there isn’t any… or at least not much.

That’s correct in the aggregate. It’s not correct for everyone.

The official Consumer Price Index assumes everyone buys a standard basket of goods and services at national average prices. But in fact, prices vary a lot depending where you are and what you buy.

They also vary depending who you are, according to some new research.

A study by researchers at Columbia University and the London School of Economics looked at price data from retail stores collected from 2004 to 2015. They then compared it with income distribution data.

The results showed that prices of everyday goods rose more for low-income Americans. It doesn’t sound like much: just 0.44 percentage points per year. But over long periods, it adds up.

“The rich get richer and the poor get poorer” is a trite saying, but the study’s data show it’s actually true. Adjusting for inflation as each group experienced it, income for the poorest quintile fell 6.7% from 2004 to 2018, while the wealthiest quintile’s income grew 16.6%. 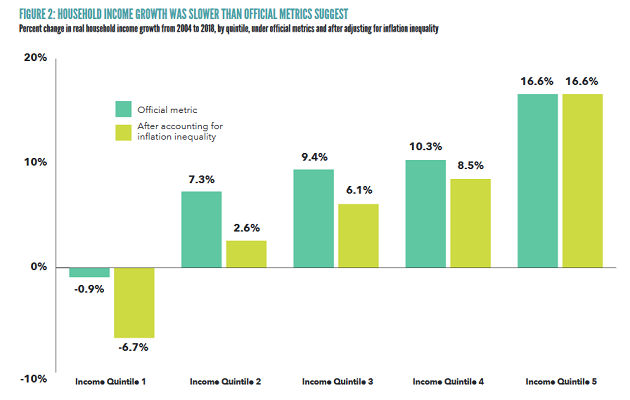 For this to happen, prices for goods bought by low-income households must be rising more (or falling less) than those bought by wealthier people. Why would that be?

The authors speculate that it’s because retailers have a financial incentive to offer the most attractive prices to the highest-spending customers. There’s more competition at the high end, which helps keep prices down.

Another reason is that lower-income people spend more of their income—often all of it—on non-discretionary “survival” expenses like healthcare and rent. These have been rising more than luxury goods.

Higher-paid people may not notice that difference because it is outside their own experience. For instance, here is a wealthy politician on Twitter.

Healthcare is a good example of inflation inequality. If you get cancer, the costs of your care will be about the same regardless of your income. But percentage-wise, the cost drops as your income rises. Mitt Romney doesn’t have to worry about medical bankruptcy like the lower half of the pyramid does.

The same happens in housing. Those at the bottom can easily spend a third of their income just on basic shelter, and that expense has been rising. For Romney, living in the same kind of tiny apartment would take only pocket change.

The Federal Reserve has a legal mandate to maintain “price stability.” But as we’ve seen, most Americans aren’t enjoying stable prices for the items they need to survive.

That’s not entirely the Fed’s fault, but its leaders could at least acknowledge the fact.

Instead, we get statements like this from Jerome Powell at his last news conference:

“I think we would need to see a really significant move up in inflation that’s persistent before we even consider raising rates to address inflation concerns.”

To use technical economic terms, this is bananas. Powell fixates on the official aggregates which don’t reflect the experience of most Americans. He actually wants more inflation.

Now, it isn’t clear the Fed could stop inflation even if it wanted to. But Powell sees no need to even try.

The problem there is that people can only take so much. The economic pressures that led millions to consider someone like Donald Trump in the US, or Brexit in the UK, haven’t improved. In some ways, they are getting worse.

Pretending those pressures don’t exist, and doing nothing to address them, probably won’t end well for people like Romney and Powell.

But that appears to be their strategy. They are practically begging the masses to make big changes at the top.

It hasn’t gotten much US news coverage, but a wave of protests are sweeping the world right now. The issues vary, but there’s a common thread. People have figured out they don’t have to accept whatever their local plutocrats offer. By acting together, they can force change.

That doesn’t mean such changes will work. We’re going to find out, though… because they’re coming here soon.