US President Donald Trump and Chinese President Xi Jinping are meeting now at Trump’s Mar-a-Lago estate in Florida. Most meetings between world leaders are relatively unimportant.

This meeting is an exception, not because of whatever agreements or statements will emerge, but because of what it reveals about the current needs of the political administration of the world’s two largest economies.

The issue of unfair Chinese trade practices was a recurrent theme in Trump’s campaign, and Trump needs to show his base that he can deliver on some of his promises.

Xi wants to avoid straining US-China relations because he needs stability at home ahead of the Communist Party’s National Congress at the end of the year.

While the US and China do not see eye to eye on many issues, they share a need for stability in the broad relationship right now.

The three graphics below represent some of the fundamentals of this relationship.

China Relies on Exports to the US

The story for China is simple. China achieved 30 years of rapid economic growth primarily by relying on exports. The US is the largest market for China’s exports.

As the chart below shows, almost 20% of all Chinese exports went to the United States in 2015 (the last year for which this data is available). 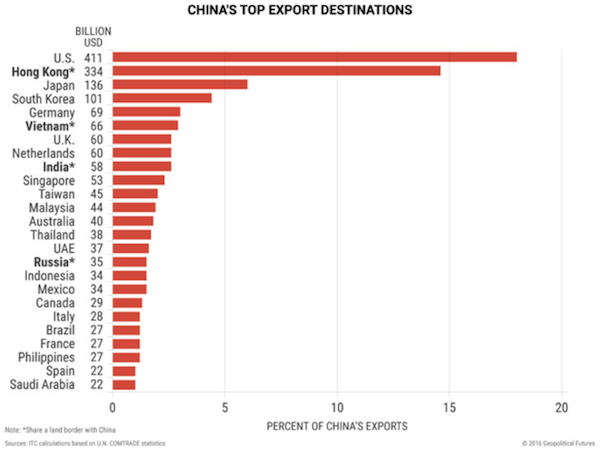 China has reached the limits of this export-led growth and is attempting to focus more on internal consumption without drastically reducing growth, which could put jobs and, by extension, social stability at risk.

To pull this off, Xi has asserted increasingly direct control over China’s political administration, economic policies, and the People’s Liberation Army.

This year’s National Congress will be one of the key moments in Xi’s consolidation of control. Most of Xi’s political challengers have been neutralized, but Xi still must strike a delicate balance.

He cannot afford to appear weak at either the domestic or international level. He also, however, cannot afford a full-scale trade conflict with the United States. If the US significantly restricts Chinese access to the US market, the effects on China’s economy would be drastic.

This is the “trump card” lurking behind these talks: China is in no position to play hardball with the US right now.

It should be noted that disagreements over trade between these two countries are not new. The administration of former President Barack Obama was less abrasive with China than Trump’s administration, but Obama still adopted measures to protect the US market.

The US Depends on China’s Cheap Imports

We have written in-depth about why the US-China trade relationship favors the US. That, however, does not mean the US can simply do whatever it wants. More than one-fifth of all US imports came from China in 2015. 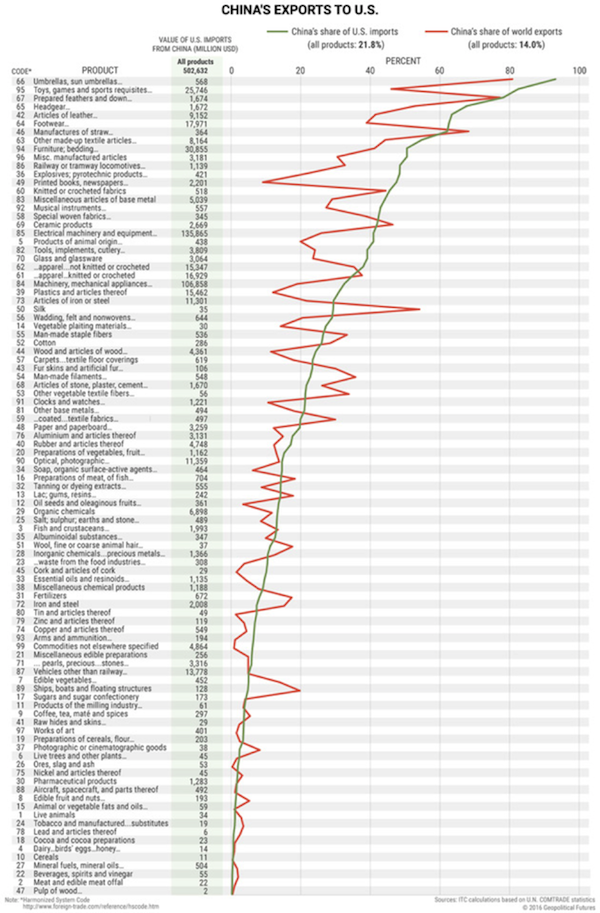 China relies on exports to the US, but a similar case could be made that the US is addicted to cheap imports from China.

This is why all the talk of a trade war has been overblown from the start. Many have noted that Trump has not labeled China a currency manipulator, as he promised to do during the campaign. The US could weather a US-China trade war better than China could, but that does not mean that the US would come out unscathed.

If such an economic conflict did take place, the effects would be disproportionately felt by the very class of voters that put Trump in office.

Some feared that Trump would start either a trade war or a real war with China. He has moved away from both these scenarios because they aren’t in the interests of the US or the administration. He needs to show that he can deliver wins in the US-China relationship when it comes to trade, North Korea, and the South China Sea.

Trump is already tweeting a big game about how difficult these meetings will be, and on a certain level he is right. But both sides have an interest in coming to a mutual understanding that both Trump and Xi can use to strengthen their positions at home.

US-China relations in 2017 have much more to do with domestic constraints in both countries than with open conflict between the two.

We often return to the below map because it is highly relevant to any discussion of US-China relations. 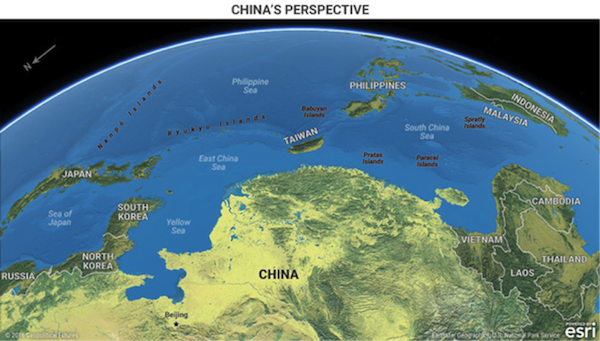 China is surrounded by US allies and small island chains that the US Navy could use to put China in a de facto cage if a military conflict ever arises.

This map also emphasizes North Korea’s importance in negotiations between China and the US. China uses North Korea to gain leverage over the US because it can claim, with some validity, to be the country with the most influence in North Korea.

The US is concerned about North Korea because of the recent actions by Kim Jong Un’s administration. This plays into China’s hands—it can offer to cooperate on the North Korea issue in exchange for US concessions on some of the points laid out above.

The map above also shows China’s geographic challenges in trying to assert itself in its own backyard against the United States. China’s best move right now is to try to destabilize US allies in the region, preferably by increasing China’s influence at the same time.

China is trying this to varying degrees with countries like the Philippines and Myanmar. But so far, it has had limited success partly because China lacks sufficient military power to challenge the US and its allies in the region.

Xi and Trump’s meeting at Mar-a-Lago will be a useful barometer in determining how US-China relations will develop over the year. If the above analysis is correct, those relations, at least in 2017, should be significantly more cooperative than most expect.

The US and China have differences but also share some broader interests. As we move further into the Trump administration’s time in office, that may change—especially if Xi is successful at consolidating his rule while bringing a semblance of stability to China’s economy.

But that is a big if. For now, keeping these basic strategic realities in mind helps make sense of what’s at stake this week in geopolitics.