North Korea has received a lot of focus due to a recent missile test and the expectation of another nuclear test. It is a poor country whose nuclear program has allowed it to punch above its weight internationally. This has also forced superpowers to approach it with great caution.

Nuclear bombs are in their own category of weapon. They are useful in that they deter aggression. The potential for massive destruction on both sides forces countries to rethink moves that may threaten an adversary’s national security interests.

If North Korea’s used a nuclear weapon, its deterrent capability would be gone. This would be akin to committing certain suicide.

It is true that many fear the irrational North Korean leadership. But Geopolitical Futures’ current view of the regime is that it has existed for decades because it is able to make cautious calculations and has continued to choose not to inflict destruction on itself.

Besides North Korea, eight countries have nuclear weapons with an assortment of delivery systems. The maps below show which countries possess (or have possessed) nuclear weapons, as well as states that are capable of building them.

The State of the Global Nuclear Arsenal

This map points out three aspects of the global nuclear arsenal. 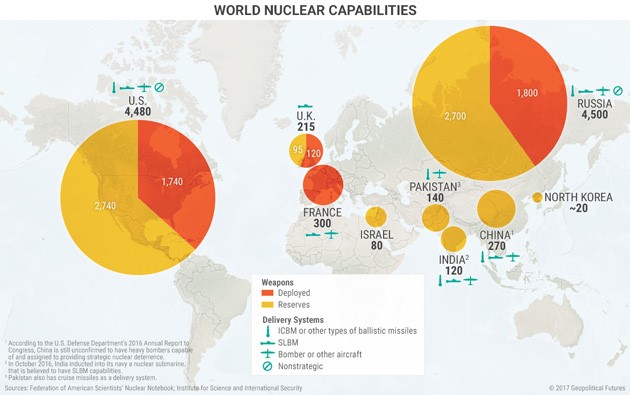 The first is a distinction between deployed and reserve weapons. Deployed nuclear weapons are attached to a delivery system and ready to use. Warheads in reserve still need this final attachment step before they can be used.

Warheads on aircraft are more flexible. Bombers can be recalled after a strike has been ordered, but they are slower to reach their target than missiles.

Each nuclear country has a different mix of delivery capabilities. Only the United States and Russia are known to definitively possess a full triad. China and India are both thought to have it.

The third aspect is the large portion of global nuclear arms held by the US and Russia. At present, the US has approximately 4,480 warheads. Russia has 4,500. This includes both strategic and nonstrategic warheads.

Several countries had nuclear weapons (or programs) that have since been abandoned. 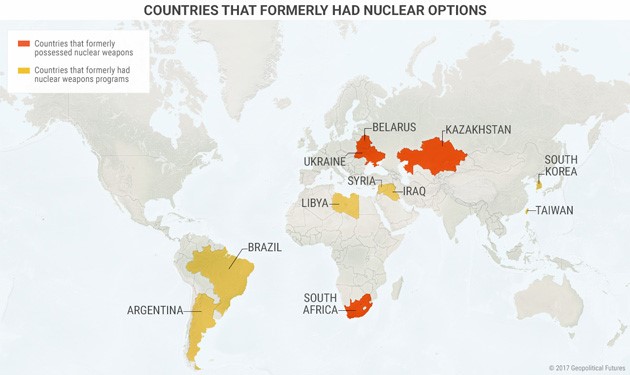 Belarus, Kazakhstan, and Ukraine all inherited nuclear weapons when the Soviet Union collapsed in 1991. But all three signed the Nuclear Non-Proliferation Treaty (NPT) and returned the weapons to Russia by the mid-1990s to be dismantled.

South Africa is the only country that independently developed its nuclear weapons and then forfeited them.

The pro-apartheid government pursued nuclear energy and weapons development from the 1960s to the 1980s. It produced six nuclear weapons. In 1989, the program was stopped as apartheid came to an end. The weapons and facilities were dismantled, and South Africa signed the NPT in 1991.

South Africa signed the NPT for two reasons. First, a 1988 agreement between Cuba, Angola, and the US resulted in the withdrawal of 50,000 Cuban troops from Angola. The troops had been stationed there during the Cold War and supported by the Soviet Union.

Second, South Africa weighed the costs and benefits of joining the NPT and realized that improved relations with the world more than offset the decreasing deterrent utility from the bomb (since the Cuban forces had been withdrawn).

Argentina and Brazil are two of the seven other countries that abandoned their programs before acquiring nuclear weapons. They both secretly pursued nuclear weapons capability beginning in the late ’60s to early ’70s. By the early ’90s, both countries had given up their weapons programs and signed the NPT.

South Korea and Taiwan had secret nuclear programs in the ’70s. These were discovered by international intelligence. Both programs were then disbanded—South Korea’s in 1975 when it signed the NPT, and Taiwan’s in 1988 as a result of pressure from the US.

Iraq, Syria, and Libya all had active nuclear weapons programs. Iraq’s nuclear program was dismantled by force after the Gulf War. Libya voluntarily gave up its secret nuclear program in 2003 under Moammar Gadhafi. Israel felt threated by Syria's program. In 2007, Israeli airstrikes took out Syria’s research reactor (which it had built with the aid of North Korea). This put a halt to its program.

When a country does not have nuclear weapons but has a peaceful nuclear program that could be used to produce nuclear weapons, it is said to be in a state of “nuclear latency.” To build a nuclear weapon, a country must have technical knowledge, access to materials, and a well-developed industrial sector.

Of the 31 countries that possess nuclear power plants, we have identified five where the acquisition of nuclear weapons would radically impact relations with their regional neighbors and global powers. 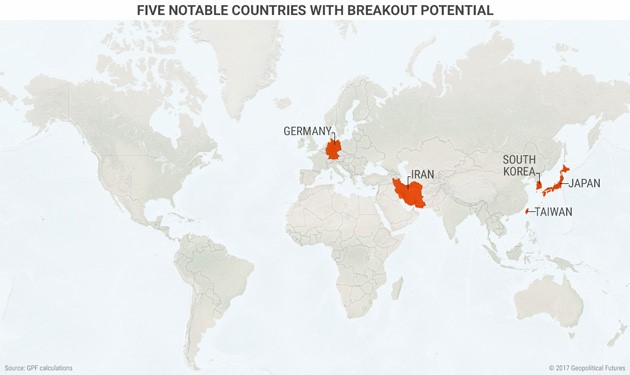 These countries have both the technology and economic resources to build these weapons. As such, they are likely to play pivotal roles in major geopolitical events within the next decade.

Iran's nuclear ambitions led to intense negotiations with the West. In 2015, the talks resulted in the signing of the Joint Comprehensive Plan of Action (JCPOA).  Iran shelved its nuclear program for a set period of time in exchange for benefits. This included sanctions relief.

But if Iran were to continue to enrich uranium in secret and develop a nuclear weapon, it would change the balance of power in the region. Iran would have a new, asymmetric power relative to its Sunni rivals. This would also force Israel to consider pre-emptive strikes.

Japan’s alliance with the US has thus far deterred it from developing nuclear weapons. It knows it can rely on the US for defense. But, North Korea’s progress in its nuclear program could drive Japan to reconsider. A nuclear Japan would threaten China and force it to proceed with greater caution in the South China and East China seas.

Both South Korea and Taiwan have advanced civilian nuclear programs and technical knowledge that could be used for a weapons program. They also have the need to defend against regional threats. As North Korea moves closer to possessing a deliverable nuclear warhead, South Korean has debated acquiring a nuclear weapon.

Taiwan is in a similar position. Its sovereignty is threatened by mainland China, which possesses nuclear weapons. Taiwan could develop a nuclear weapon to deter China. But Taiwan, like South Korea, is concerned about escalation. At present, both Taiwan and South Korea have chosen to rely on the nuclear guarantee provided by their alliance with the US.

Germany is a highly industrialized state with civilian nuclear capabilities. It is protected under the NATO nuclear umbrella by the US and the European nuclear powers (France and the UK). It is also bound by international treaty not to pursue weapons development. But, Germany might reconsider its stand in order to deter Russian aggression if it questions US commitment.

What Will the US Do?

When it comes to national security, every country has a red line. If this line is crossed, it compels a nation to respond with force. Without a strong deterrent, potential foes incur less risk when they test that line.

Introducing nuclear weapons into this process forces a nation to move with caution because the risk of massive retaliation is great. But when the act of possessing nuclear weapons by one party is itself the act that breaches the security interests of the other, this can be a hard balance to strike

The world’s eyes are now set on North Korea for this reason. The United States must decide whether recent developments in North Korea’s nuclear program have crossed this boundary. And if they have, what type of force constitutes an appropriate response.