In its June meeting, the Fed pledged to begin the unwind of its $4.47 trillion balance sheet in September.

Each month, about $50 billion in Treasury bonds on the Fed’s ledger reach maturity. Then the Fed buys new bonds to replace them.

The first step in the “great unwind” will be to let a portion of these maturing bonds roll off the balance sheet.

When the Fed goes from being a net buyer to a net seller, the bond price will likely drop, and interest rates will rise. For all intents and purposes, ‘’normalizing’’ the balance sheet equates to a series of rate hikes.

What does this mean for investors?

A huge market crash is not a distant possibility. However, ‘’sell everything and head for the hills’’ is rarely a useful strategy.

So I looked at the sectors that are set to thrive in this environment and picked the three that look most promising.

The future looks bright, too.

In their latest Earnings Insight report, FactSet found that of all the sectors, healthcare received the most bullish ratings from analysts for Q3 2017.

Because of the rate hikes.

Since 1962, healthcare has always been the best performing sector during hiking cycles (see the chart below). 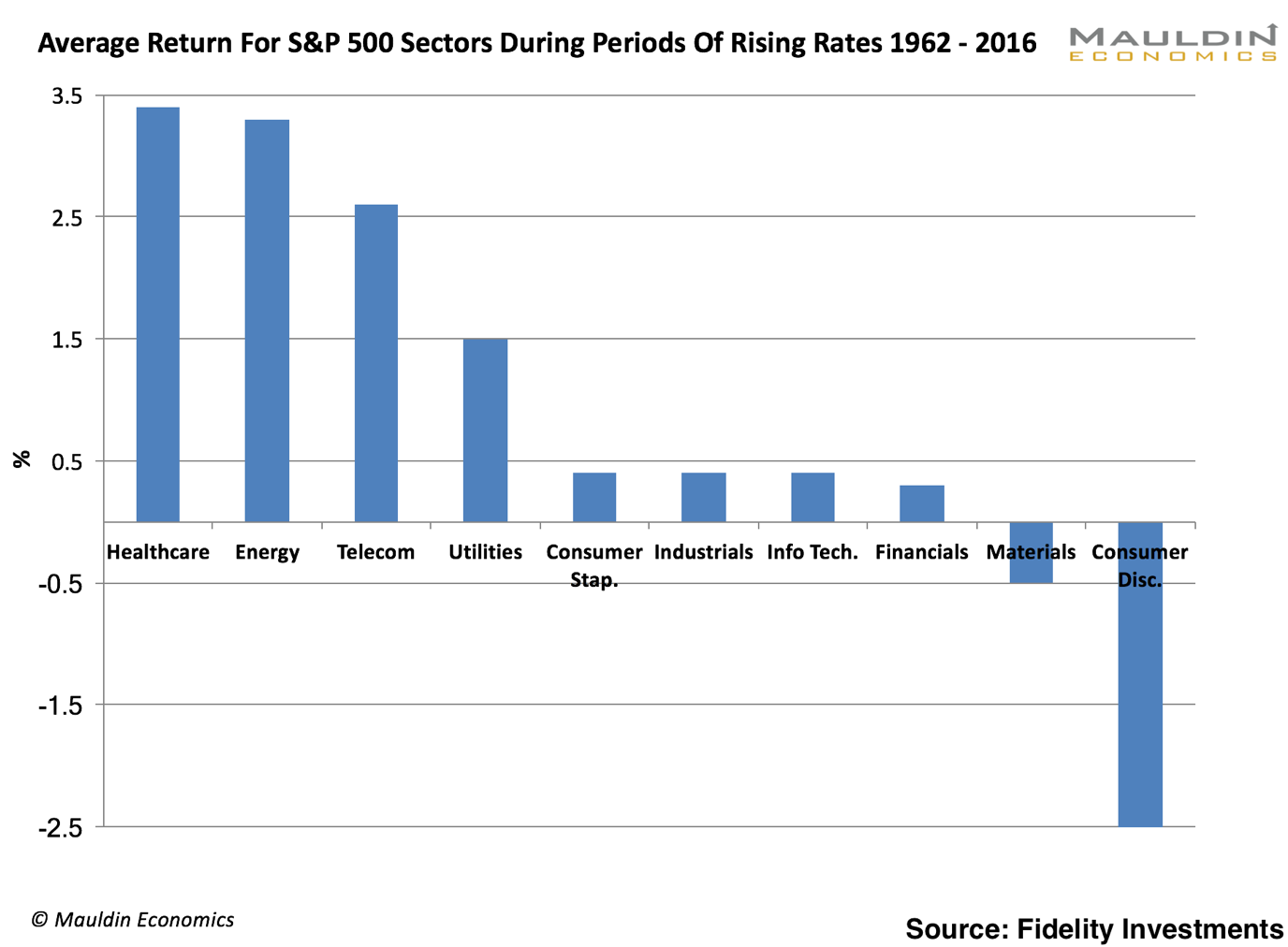 Small caps are the worst performing group so far in 2017. The sector underperformed large stocks by 47%. However, the Fed is likely to swing the balance in small caps’ favor this fall.

Small caps do exceptionally well when rates rise (see below). 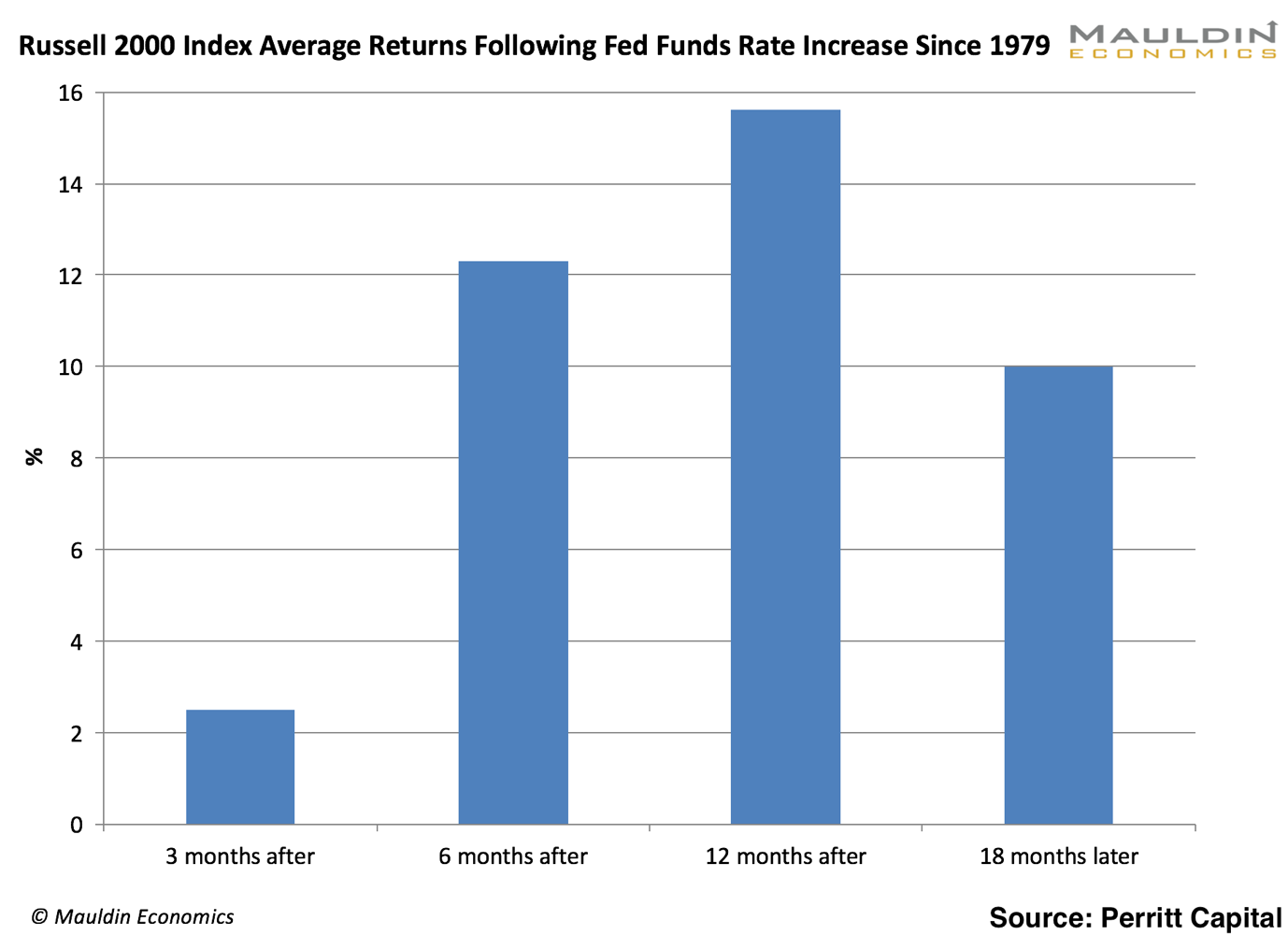 Since 1979, small caps have outperformed their large counterparts by an annualized 2% in periods of rising rates.

Credit Suisse and BNY Mellon have both recommended investors be overweight small caps in this environment.

Don’t put all your eggs in the US. If you want to take full advantage of the Fed’s unwind, Europe is another promising place to look at.

Europe’s central bank (ECB) has been making hawkish statements as of late. But the fact is they are still buying €60 billion in assets every month. And their interest rates are still at 0%.

This divergence in policy supports higher asset prices in Europe. This is seen in the widening spread between Treasury and German bund yields. 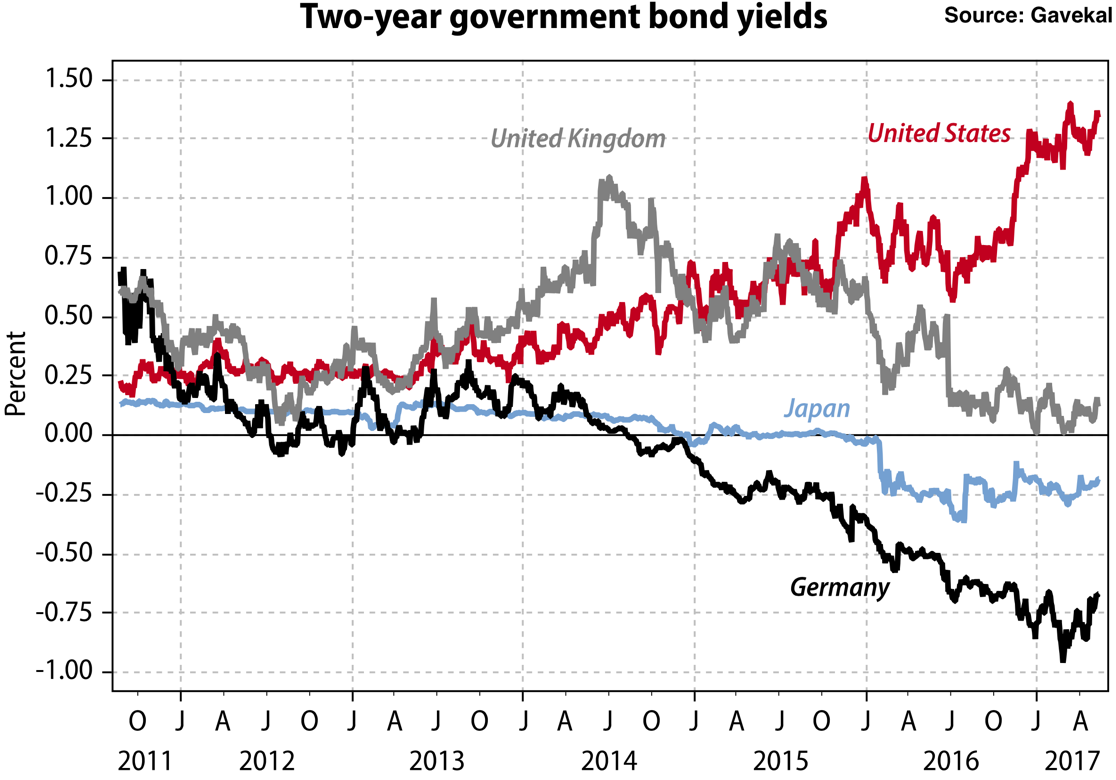 History shows US hiking cycles are usually good for European equities. In fact, global equities (ex. US) outperformed US stocks in 7 out of the last 8 hiking cycles.

In the last 8 hiking cycles, global equities, measured by the MSCI EAFE Index, have grown at an annual rate of 14.5%, according Ritholtz Wealth Management. That’s almost double the 7.85% for the S&P 500.

This divergence has already manifested itself in stock markets.

Since the beginning of 2017, the Vanguard FTSE Europe ETF (VGK)—the main ETF for the European market—is up twice as much as the SPDR S&P 500 ETF (SPY).

And now Europe’s performance has drawn the interest of major money managers—which is a bullish signal in and of itself. In a recent outlook, Credit Suisse said Europe was its “most preferred region,” citing attractive valuations as the reason.

Jared Dillian, Former Head of ETF Trading at Lehman Brothers, is another high-profile investor who has been bullish on Europe since December 2016.

Post-US election, money was pouring into US stocks. However, as a determined contrarian, Jared invested in a large-cap European bank. The trade has earned him a 57.7% gain already.

Join 200,000+ Investors Who Get an Advantage Only a Former Wall Street Trader Can Provide

If you want more contrarian investment ideas from the former head of ETF trading at Lehman Brothers, you can get Jared’s insight an analysis through his free weekly newsletter, the 10th Man.