Philip Morris (PM) had its back against the wall.

The tobacco giant had been selling cigarettes by the truckload and enjoying record profits. Back then smoking was irresistibly cool. People smoked on planes and around babies... clueless that smoking was deadly.

That all changed in the ‘50s when scientists discovered smoking could kill you. Tobacco companies were in trouble. They scrambled to develop filtered cigarettes to keep out some of the harmful chemicals.

Filtered cigarettes were less deadly. But they were also perceived to be less “manly.” Men didn’t want to be seen smoking “soft tips.” Cigarette sales plunged... and the industry approached crisis.

Then a handsome man rode in on a horse. He had a chiseled face... wore a cowboy hat... and held a filtered Marlboro cigarette between his lips.

He was the Marlboro Man...and he singlehandedly made Marlboros manly again.

The Marlboro Man ad was so memorable that 9 out of 10 kids still recognized it 40 years later when researchers studied it in the 1990s.

You’ll find these brands in practically every American household. Procter & Gamble (PG) owns them all.

P&G is the world’s 15th-largest company. It wormed its way into almost every American home by spending ungodly sums of money on advertising. In 7 of the past 10 years, it’s spent more on ads than any other company on earth.

If you’re like most folks, you probably don’t buy Crest toothpaste or Dawn dish soap because they’re the best. You buy them because they’re familiar. Their ads are all over TV… on billboards… in newspapers... on the internet.

These are the five largest advertisers on earth:

Notice that four of the five sell “basics.” Like P&G, they sell things like shampoo, deodorant, bleach, and breakfast cereal.

Before the internet took off, we watched TV and read magazines for entertainment.

And this is where advertisers caught our eye. In 2000, 90 cents of every ad dollar went into TV and print.

This meant companies had to spend BIG on marketing to get noticed. And it practically guaranteed nobody could disrupt a giant like P&G.

P&G spends 3X the GDP of Belize every year to keep its brands #1. How could any startup possibly compete when it couldn’t afford to buy a single ad?

Marketers no longer spend most of their ad dollars on prime-time TV ads. Instead they plowed $130 billion into internet ads last year. More than TV… newspaper… and radio, combined: 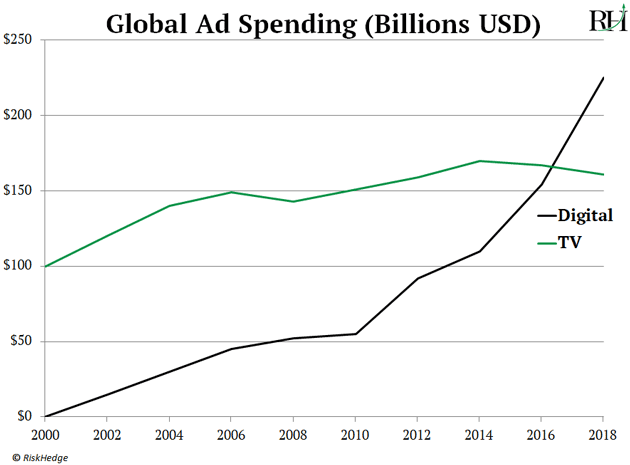 Remember, traditional ads like the ones on TV are imprecise and expensive. They reach millions of people, most of whom are not interested in the product being advertised.

Internet ads, on the other hand, are precise. A good internet marketer can zero in on folks who want what you’re selling. You don’t have to buy a full-page newspaper ad to get noticed anymore. Companies can spend a couple thousand bucks on digital ads and catch the eyeballs of exactly the right people.

For the first time, this has allowed upstart brands to compete with the “Big 4” of P&G, Unilever, Nestlé, and L’Oréal. In fact, since 2011, they’ve lost an estimated $35 billion in market share to smaller “craft” brands, according to Boston Consulting Group.

For example, Procter & Gamble’s Gillette brand used to dominate 70% of the shaving market. Then disruptor Dollar Shave Club came along and used “guerilla” marketing to steal a huge chunk of the market.

Yet sales of oats and protein bar maker RXBAR surged nine-fold  over the past year. Kellogg’s just bought the company for $600 million.

As I said, with online ads, you no longer need a billion-dollar marketing budget to compete with bigger companies. Expect more and more disruptors to use online ads to snatch customers away from the behemoth brands. Old companies like P&G and Unilever will struggle.

Longtime RiskHedge readers will remember I highlighted The Trade Desk (TTD) back in 2018. In short, Trade Desk is like a “stock exchange” for targeted ads. It’s making a killing as internet advertising continues to explode.

The stock was selling for less than 100 bucks when I first wrote about it. It’s soared over 190% since then, as you can see here: 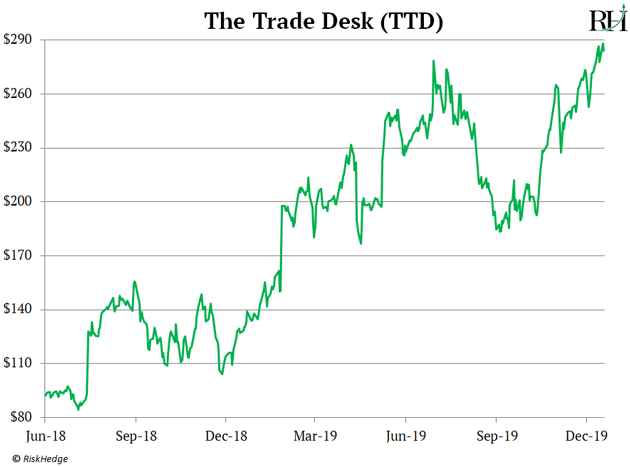 The Trade Desk is no longer flying under the radar... but it’s still a solid buy at today’s prices.

Sales have jumped 41%... 42%... and 38% over the past three quarters. And it’s primed to keep smashing records as more ad dollars move online.

Have you clicked on any internet ads and purchased something lately? Tell me at Stephen@Riskhedge.com