Ready for a surprise?

Below I wrote down the four best performing large US stocks of 2019.

If you’re a RiskHedge reader, one through three won’t surprise you.

As we’ve discussed, computer chips enabled practically every exciting innovation of the last twenty years. Chips go inside everything these days... from your iPhone...to a Tesla... to your “smart” coffee maker.

These chip stocks lack “household name” status. Most folks have never heard of them like they have Apple and Amazon. But Apple and Amazon couldn’t exist without them. So it’s no shocker their stocks quietly soared last year.

But sitting right behind them is a head-scratcher:

Chipotle investors doubled their money in 2019: 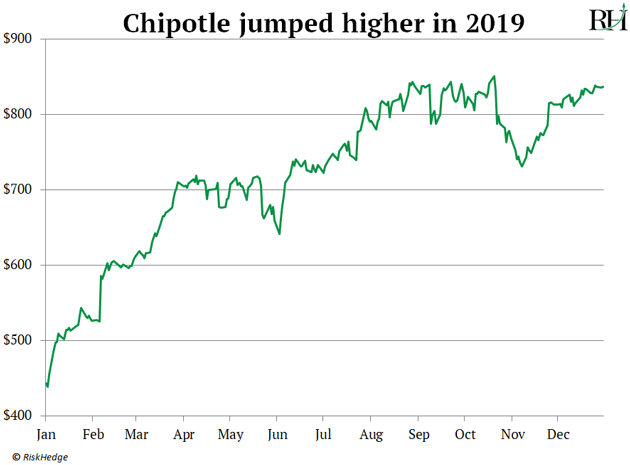 As longtime RiskHedge readers know, my team and I study disruption and how to make money from it.

We find stocks that create and transform whole industries and change the world.

How in the world did a Mexican fast-food chain blow away Amazon and Apple in 2019?

Although Chipotle didn’t directly disrupt anything... It made the brilliant decision to “ride the coattails” of a disruptive megatrend.

Have you heard the quote: “It was easy to predict mass car ownership but hard to predict Walmart.”?

In other words, it was pretty obvious that American car ownership was going to explode in the 1950s. But it was much harder to predict the domino effects of mass car ownership. One of which was the rise of Walmart (WMT).

Before cars, grocery stores had to be located in towns where people could walk to them. Cars changed everything. Walmart pounced on the opportunity to put its giant supercenter stores on the outskirts where land and rent were cheaper. Paying less for land and rent allowed it to undercut competitors with its “everyday low prices”... and the rest is history.

Walmart shareholders made far more money off cars than any car stocks did. Today, Walmart stock sits at record highs. But automakers Ford (F) and General Motors (GM) have been dead money for decades.

Food delivery companies have sprouted up everywhere. Click a few buttons and Postmates… Doordash… Uber Eats… Grub Hub… or Caviar will pick up your burrito from Chipotle and bring it to your front door.

Over two billion food orders were delivered in 2019, according to market research firm NPD Group.

Problem is, not one of these food delivery companies has turned a penny of profit. Food delivery is a cut-throat business. Uber Eats makes up one-tenth of Uber’s total business... but accounted for 30% of its losses last quarter.

Digital orders made up less than 2% of its business in 2017. Now 20% of all orders come through its app.

Lots of folks see food delivery companies growing at warp speed and think they must be great investments. Wrong. These firms are like a bunch of hyenas fighting for scraps. Most will go bust within a few years.

Chipotle is quietly in the background, raking in money from food delivery. In fact, its digital sales will top $1 billion in 2020. Chipotle has essentially plucked a billion dollars out of thin air by riding this disruptive trend.

Pizza probably isn’t the first thing that comes to mind when you think of huge stock market gains.

But Domino’s Pizza (DPZ) trounced ALL big “growthy” tech stocks over the past few years, as you can see here: 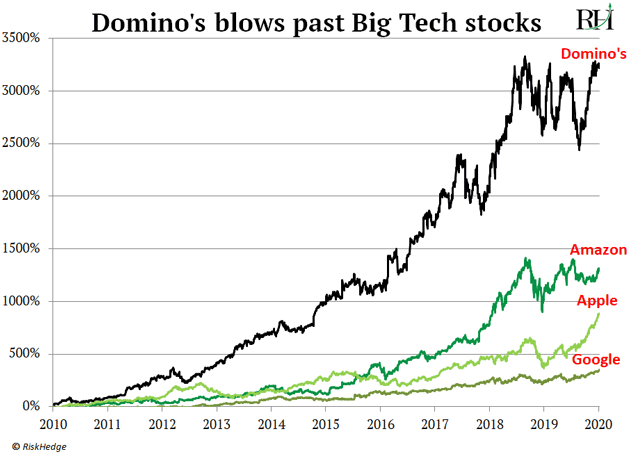 Domino’s transformed itself from a dull pizza chain into a growth machine by going “all-in” on digital.

In 2010, it launched an app making it easy to order pizza and track its progress. Back then, less than 5% of its sales were online. Today two-thirds of its sales come through its app!

Think about that… digital sales jumped from 5% to 65%! Every ounce of growth Domino’s enjoyed over the past decade has come from its online delivery business.

Go to a Chipotle, stand in line, and shout out your order.

There are dozens of reasons why many folks can’t or won’t do that. Maybe there isn’t a Chipotle near you. Maybe you don’t have time to wait in a busy line. Maybe you don’t feel like getting off the couch.

Online food delivery clears all those hurdles. It removes all the inconvenience and brings a burrito right to your doorstep. This is key because it opened a whole new market for Chipotle. CEO Brian Niccol says nearly half of folks who order online are new customers.

Next time you hear about a big disruptive trend, ask: Who’s profiting?

The real moneymaking stocks often lurk in the background.

Have you invested in any of our disruptive ideas? Let me know at Stephen@riskhedge.com.