On Friday, the cell carrier “flipped the switch” to activate America’s first widespread 5G network. T-Mobile’s new 5G network will reportedly cover more than half of all Americans.

This is a big deal. As you probably know by now, 5G is the new superfast cell network that promises to change the world. At up to 100X faster than 4G, its lightning speed will totally change how we use the internet.

Folks have been talking about 5G and hyping it up for years.

I recently visited a cell phone store to try 5G myself. The sales guy whipped out a brand new 5G phone and downloaded a two-hour high-definition movie in about 10 seconds. This would take at least 15 minutes on 4G.

And downloading a movie in seconds is the least exciting thing about 5G.

With 5G, you’ll be able to attend meetings holographically. You’ll be able to nap during your commute as a true self-driving car takes you home from work. Fully robotic factories will practically run themselves.

The thing is… T-Mobile’s version of 5G CAN’T DO ANY OF THIS!

Although T-Mobile’s marketing department calls its net network “5G,” it’s really more like “4 ½G”... because it’s not all that much faster than current 4G networks.

Remember, 5G has a glaring weakness. Although a true 5G signal is blisteringly fast, it can only travel roughly 1/200 the distance of a 4G signal. Verizon’s 5G signal in Chicago stretches only about 120 yards.

One tower can’t even cover a single NFL stadium... which is a problem when you’re trying to roll it out across sprawling cities. 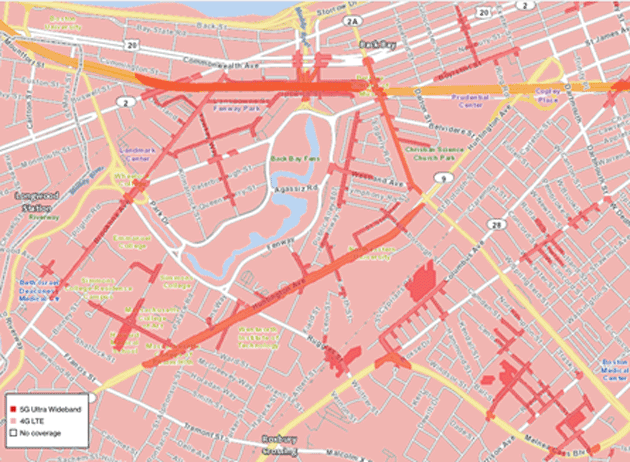 You can pick up a 5G signal as long as you’re around Fenway Park, home of the Boston Red Sox. As for pretty much everywhere else, regular ol’ 4G will have to do for now.

Verizon and rival AT&T are building new mini-cell towers on practically every street corner to make true 5G work. In other words, they’re rolling out their networks block by block.

T-Mobile is taking a different approach with its “4½G.” Instead of building a whole new fleet of small towers, it has revamped its existing cell towers with 4½G network gear. These receivers can blast a signal up to 2.5 miles away, which is how T-Mobile reached 5,000 US towns with the flip of a switch.

The downside is speeds aren’t much faster than regular 4G.

Or will Verizon and AT&T’s focus on real 5G be the winning strategy?

If I had to rank these “big 3” cell carrier stocks, I’d probably go...

Verizon’s slow, methodical buildout of true 5G will take many years, but I expect its 5G network to cover most major US cities in the next 12 months. And Verizon’s customers mostly live in densely packed cities.

With a slew of new 5G smartphones—including the iPhone—hitting the market next year, Verizon’s sales should get a boost.

With its “4½G” strategy, T-Mobile will dominate in rural America. Sure, it’s just a puffed up 4G. But because the 5G rollout will take years and will focus on cities first, 4½G will be the fastest service available to rural America for a while.

If you want to make real money from 5G today, there are MUCH better stocks to own now.

As I’ve mentioned before, the “big 3”—Verizon, AT&T, and T-Mobile—must shell out billions of dollars to get America 5G ready.

And building towers is just the tip of the iceberg.

Roads must be pulled up to lay underground fiber-optic cables... existing cell towers have to be refitted with new 5G equipment...

It’s a giant, multi-billion-dollar infrastructure product. The bottom line is the “big 3” cell carriers are footing the bill.

When you can own companies COLLECTING all these billions?

I’m talking about firms in the business of building the 5G infrastructure.

Putting up the 5G towers.

That’s where you want to be invested right now

In businesses that the “big 3”—AT&T, Verizon, and T-Mobile—are throwing heaps of cash at.

In my premium service Disruption Investor, we own three stocks collecting billions from 5G.

One of our stocks sells 5G internet boxes to Verizon and others, for $40,000 each.

And its 5G revenues have shot up 27% in the past year.

If you want to get this top 5G stock, go here to activate a risk-free trial subscription to Disruption Investor. You’ll discover my top three favorite 5G stocks minutes from now.

Remember... we’re slap bang in the middle of the 5G buildout phase.

You want to own the stocks profiting from the buildout... not paying for it!

That’s all for this week. Will you be rushing out to buy a 5G phone? Let me know at Stephen@Riskhedge.com.