GDP growth has slowed down to 6.9%, according to official numbers. The numbers are likely inflated, but the boom is still underway.

Reasonable estimates from knowledgeable observers still have China growing at 4–5%, which is rather remarkable given China’s size.

However, the problem lies in the debt that is fueling the growth.

A report from the People’s Bank of China showed off-balance-sheet lending far higher than previously thought and accelerating quickly. (Interestingly, the Chinese have made all of this quite public. And President Xi has taken control of publicizing it.) 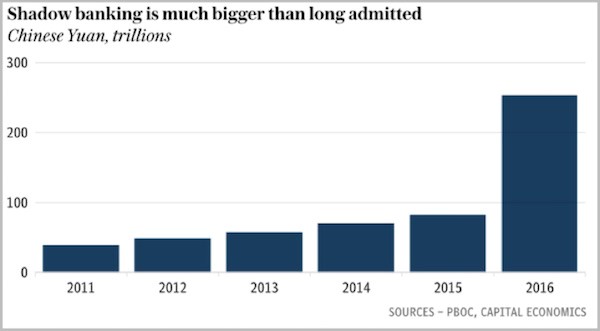 The huge increase last year probably reflects efforts to jump-start growth following the 2015 downturn. Banks poured fuel on the fire because letting it go out would have been even worse. But they can’t stoke that blaze forever.

This Is Not Sustainable by Any Means

President Xi Jinping has been trying to dial back credit growth in the state-owned banks for some time, but in the shadow banks that Xi doesn’t control, credit is growing at an astoundingly high rate, far offsetting any minor cutbacks that Xi has made.

Here are a few more juicy quotes from Ambrose:

President Xi Jinping called for a hard-headed campaign to curb systemic risk and to flush out “zombie companies”, warning over the weekend that financial stability was a matter of urgent national security.

It is the first time that a Chinese leader has chaired the National Finance Work Conference – held every five years to thrash out long-term plans – and is a sign of rising concern as debt reaches 280pc of GDP.

In a move that will send shivers up the spines of local party officials, he said they will be held accountable for the rest of their lives for debts that go wrong. Any failure to identify and tackle risks will be deemed “malfeasance”.

“The banks have been selling products saying it isn’t our risk. Investors have been buying them saying it’s not our risk either. They all think the government will save everything. So what the markets are pricing is what they think is political risk, not economic risk,” he said.

A market in which “they all think the government will save everything” is generally not one you want to own—but China has been an exception. It won’t remain one forever. The collapse, when it comes, could be earthshaking.

Chinese growth has been fueled by a near doubling of both GDP and debt over the last nine years: 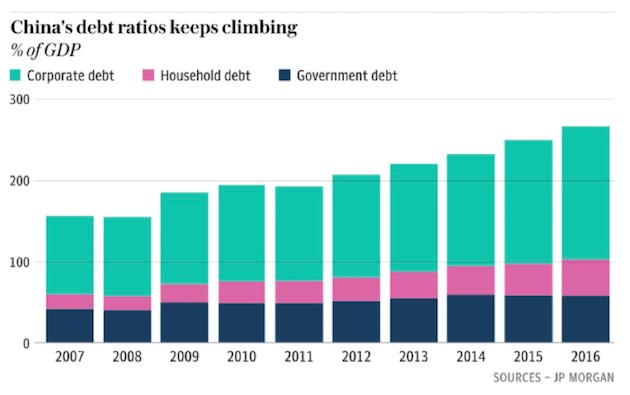 One reason why so many people are complacent about China is that they truly believe that “this time is different” applies to Chinese debt. Maybe in 10 years I will look back and say that it really was different, but I don’t think so.

As is often the case with China, China's current circumstances are without a true equal in the history of the world .

And if Xi is really serious about slowing the pace of growth (another form of tightening by a major world economy), that move would just add to overall global risk.