Last year, the first baby boomers turned 70 and that spells trouble for investors.

Speaking at the Mauldin Economics Strategic Investment Conference, Grant Williams, Co-Founder of RealVision TV, warned investors about the wave of forced selling by millions of retirees and the impact it will have on their portfolios.

Equities Make Up 70% of Boomers’ Portfolios

“Boomers are the largest generation in history to retire, and they’re doing so right now.”

In fact, according to Pew Research, 1.5 million Americans turned 70 last year and will do so every year for the next 15 years.

“When Boomers are retiring in their millions, they have 70% of their portfolios in equities… at a point in time when we are due a recession,” pointed out Grant Williams.

“And in recession, bad things happen… the average stock market drawdown in recession since 1980 is 37%.”

While boomers have their biggest allocation to equities they’ve ever had, Williams says the numbers don’t look good for them: “The reality is they don’t have enough money to retire.”

“According to BlackRock, the average Boomer has only $136,000 saved for retirement. Even with return assumptions fixed at 7%, when they’re more like 2%, you are talking an income of $9,000 a year… that’s $36,000 shy of the ideal retirement income,” adds Williams.

As such, boomers will be forced to look for income elsewhere. In the not-so-distant past, that has come from bonds.

As the below chart shows, once you hit the age of 65, you go through the most profound asset class shift since your 30s. You trim your equity positions and raise your bond exposure to lower the risk. 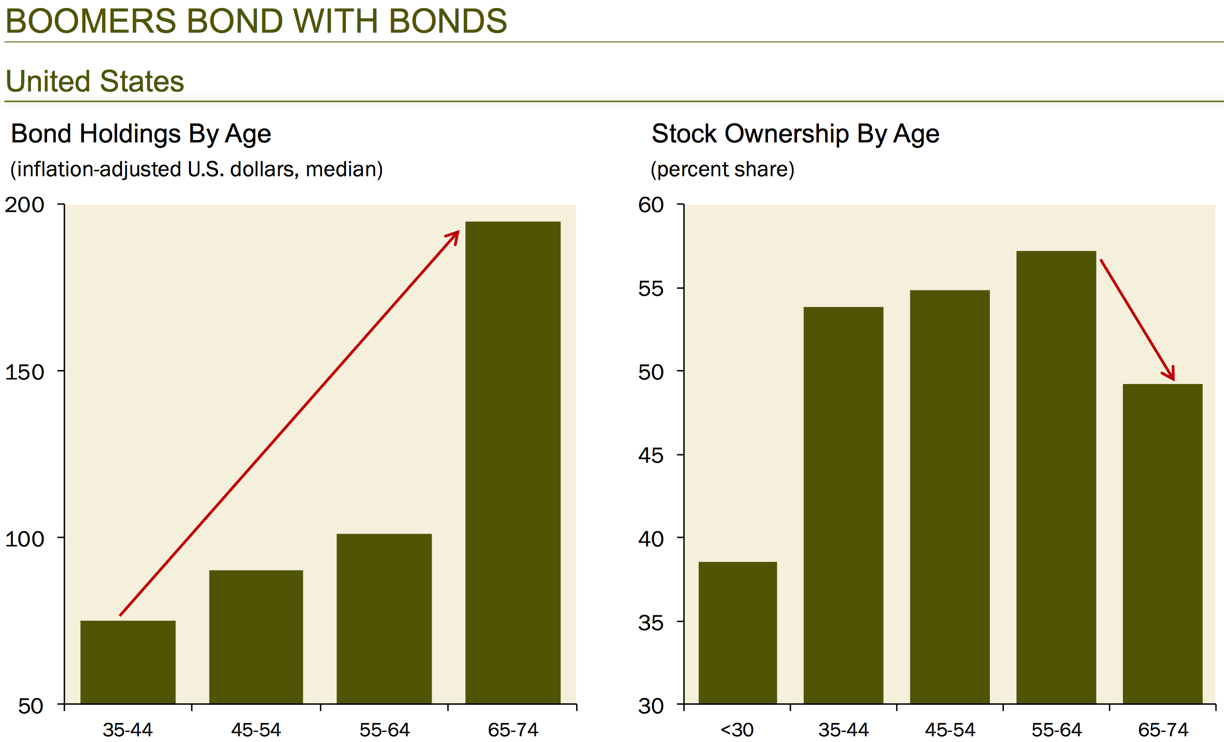 However, with today’s yields, bonds won’t provide the needed income.

Even if boomers decide to stick to equities for higher yields, there’s another reason they will be forced to divest their equity holdings—one they have little choice in.

Forced to Sell 5% of Their Portfolios Every Year

Due to IRS mandatory minimum drawdown laws for retirement plans like IRAs and 401(k)s, when you turn 70 ½, you are forced to withdraw at least 5% of the value of the plan each year.

Williams thinks it will have profound implications: “Boomers started turning 70 ½ in April, this is a real problem and people don’t understand the ramifications of it.”

This forced selling will flood the market with billions worth of equities, which will push down prices.

Given that 15 million retirees will be forced to divest their equity holdings over the next decade, Grant has some thoughts on what investors like you and me should be doing today: “Get out of equities. You might think you’re a wealthy guy… but if you have 70% of your portfolio in equities and you take a 40% haircut, you’re not a wealthy guy anymore.”

What Does This Mean for the US Economy?

For Grant’s thoughts on what the retirement crisis means for the US economy, big demographic trends, and more—watch the full interview below.