The trend is your friend. How many times have you heard that saying? HOW MANY?

It’s a deeper philosophical question. You get to believe only one of the following, not both:

2) The market is mean reverting

So which is it?

It is both, but it depends on the time frame.

This is the sort of thing the scientists and eggheads at places like Renaissance Technologies have studied to no end.

They would write academic papers on it, except that trading on this knowledge is a lot more profitable than writing an academic paper.

But in my experience, in the short term (seconds and minutes), markets mean-revert, but in the long term, they trend.

If you are day trading something like the Direxion Daily Gold Miners Index Bull 3X Shares (NUGT), you are doomed in about 14 different ways.

So in the long term, markets trend. A question: Do you think this chart is trending? 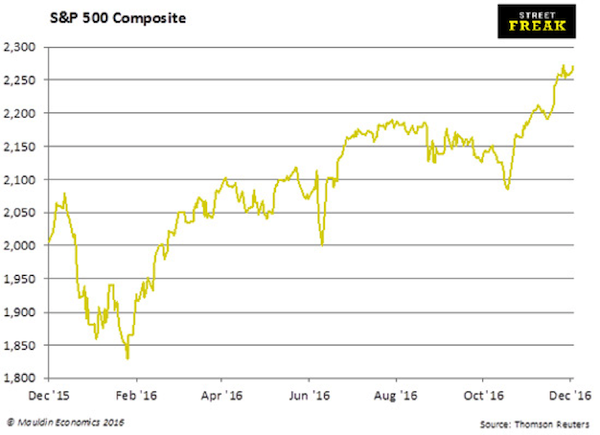 So why are so many people betting that it is going to go down?

Am I bullish on stocks?

I guess. I actually don’t have strong feelings about it. But the trend is higher. And it’s not only higher, it’s relentlessly higher.

And if you look at this from a fundamental standpoint, something big and important happened a month ago that will have effects on financial markets for years.

Not sure it is the best idea to bet against the trend just one month into it.

People are pointing to sentiment—everyone is supposedly max bullish.

Well, everyone was max bullish during the dot-com bubble, and stocks still went higher nonetheless. For four years. 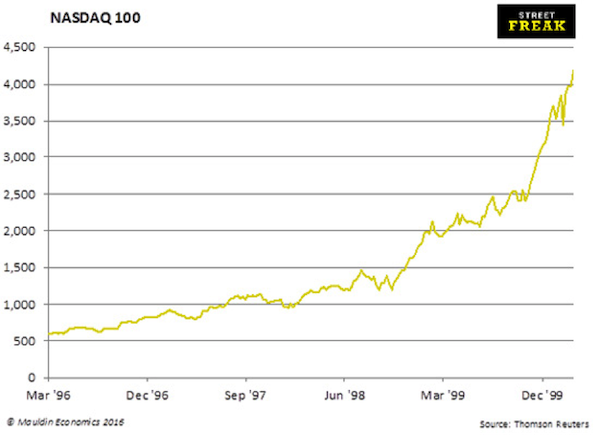 Like with the bond market—we are just a few clicks away from having irrefutable evidence that the downtrend in yields has been broken. 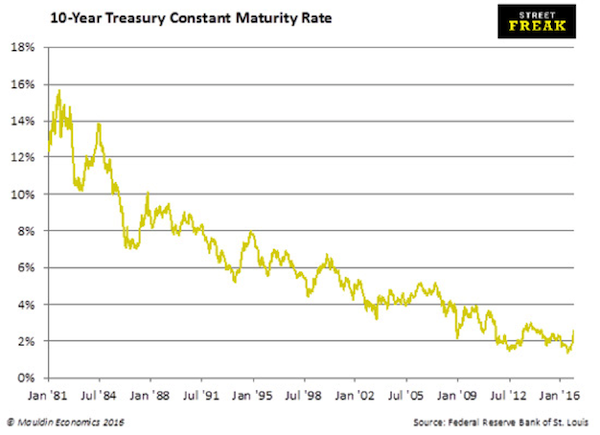 When that happens, you can only trade bonds from the short side, not the long side.

I often get accused of oversimplifying things. Some concepts in finance are complicated and should remain that way. But when it comes to money management, if it ain’t simple, it can’t be good.

The trend is your friend.

It was about nine years ago that I learned, as a trader, that I didn’t have to like a trade to be in it. That was the first time that I started using my head instead of my heart. I started buying things that I didn’t like, but bought them anyway because the chart was going up.

Ray Dalio recently wrote on how profound of a political shift has just occurred—here is the quote that just punches you right between the eyes:

“Regarding economics, if you haven’t read Ayn Rand lately, I suggest that you do as her books pretty well capture the mindset. This new administration hates weak, unproductive, socialist people and policies, and it admires strong, can-do profit makers (emphasis mine). It wants to, and probably will, shift the environment from one that makes profit makers villains with limited power to one that makes them heroes with significant power. The shift from the past administration to this administration will probably be even more significant than the 1979–82 shift from the socialists to the capitalists in the UK, US, and Germany when Margaret Thatcher, Ronald Reagan, and Helmut Kohl came to power.”

He goes on to say that the impact of the Trump administration will be bigger than what eggheads like me are calculating from tax and spending changes, because it could “ignite animal spirits and attract productive capital.” There is a lot more in the post, which you can read here.

Kind of puts our earlier discussion about trend following into perspective. So far, since the election, we’ve seen:

In fact, I think the only risk to these Trump trades is Trump himself. The guy is known to change his mind. Like, he one day just decides that Richard Cordray isn’t such a bad guy and the Consumer Financial Protection Bureau (CFPB) does good work. Or he changes his mind on taxes. Or whatever.

So the challenge here is to think about what is priced in and what’s not.

Lots of people think that the entire four years of Trump have been fully priced into financial markets, one month after the election. With stocks up 3–4% or so. With 10-year note yields up 1%. That is absurd.

Here are two ways to make a fool of yourself with the Trump trade:

Here’s one more tip before I go. If you’re smart, like I suspect a lot of my 10th Man readers are, you’re going to overthink this. Don’t be smart. Be dumb. Trump good. Buy stocks. Sell bonds. Simple as that.

Grab This Free Report to See What Lies Ahead in 2017

Now, for a limited time, you can download this free report from Mauldin Economics detailing the rocky roads that lie ahead for three globally important countries in 2017—and how the economic fallout from their coming crises could affect you. Top 3 Economic Surprises for 2017 is required reading for investors and concerned citizens alike. Get your free copy now.