Imagine handing half a million bucks to a 19-year old college kid.

That’s what Silicon Valley billionaire Peter Thiel did in the summer of 2004.

Thiel backed Mark Zuckerberg when he was just an arrogant kid who wore flip-flops to business meetings.

“Zuck” founded thefacebook.com earlier that year, and he was begging for cash to grow the dorm-room startup.

Within five years, it grew 2,000 fold to $1 billion as thefacebook.com became Facebook (FB).

Thiel founded money disruptor PayPal (PYPL) in the ‘90s. And he was an early investor in world-changers like Airbnb, SpaceX, and Palantir.

His biggest “wins” all tie back to a Wall Street Journal article he wrote titled: Competition Is for Losers.

In it, Thiel points out many of the greatest companies share one unique trait: They’re so far ahead of the game, they have no competitors.

PayPal is the perfect example. Buying stuff online through sites like eBay was “sketchy” in the early days. You usually had to pay by check, which would take up to 10 days to clear.

Buyers had to blindly trust sellers to ship the product. Sellers had to trust the check not to bounce after they handed over the goods.

And it achieved this breakthrough years before Apple Pay… Google Pay… or Square got involved in digital finance.

Airlines are a big, important industry. Yet, despite decades of rising passenger numbers, US airlines have lost more money than they’ve made over the past 30 years.

What’s wrong with airline CEOs? Are they terrible businessmen?

Air travel is an old industry with lots of ferocious competition. There’s not much difference between flying American Airlines, Delta, or United. So they’re always trying to undercut each other on airfares.

Airline stocks have been a total dumpster fire for investors: 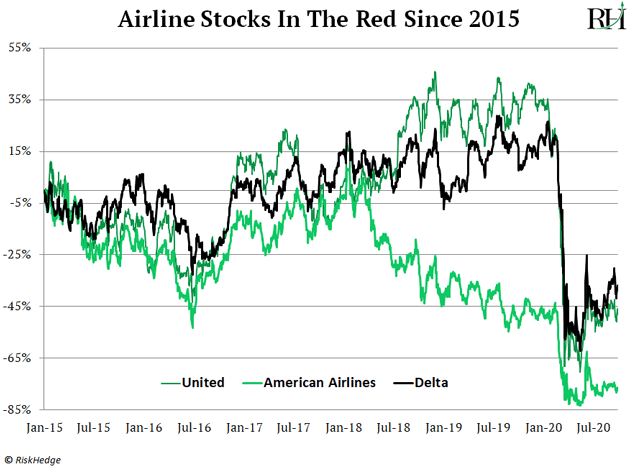 Compare this with PayPal, which carved out the entirely new “digital payments” industry for itself. Its stock has shot up 450% since 2015: 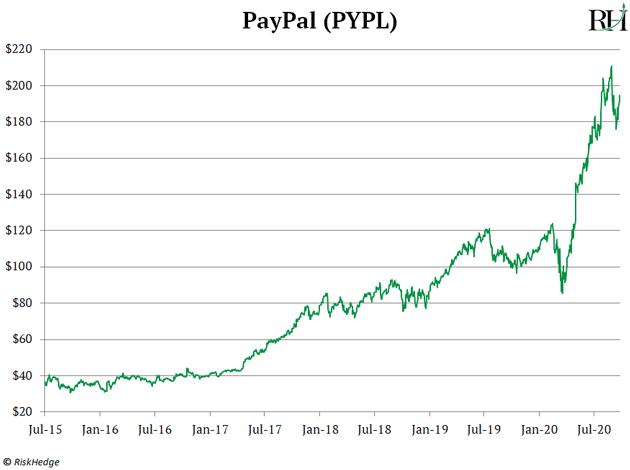 He cemented his legacy betting on the first successful social network.

Today, dozens of companies are creating new industries in the stock market.

I’m sure you’ve heard of “connected fitness” sensation Peloton (PTON). Its stock has shot up 280% since it debuted last year: 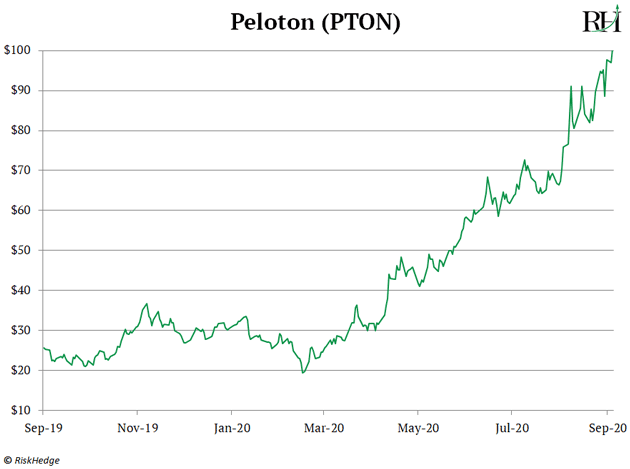 Peloton sells internet-connected stationary bikes with a 22-inch touchscreen attached to them. This allows users to take part in live-streamed exercise classes—from their living room.

The bike costs roughly $2,000. And folks pay $40 a month, in perpetuity, to access the online classes with a virtual trainer.

They’re wrong. Peloton created an entirely NEW way for America to work out.

Peloton’s indoor bike comes with a giant screen, which allows you to follow along with a real trainer. There’s also a leaderboard on-screen, so you can compete against fellow “riders” in real-time.

This unique combo unlocked something completely new: Folks can take a top-notch “spinning” class with other people… but from the comfort of their living room.

In short, this unique blend minted a whole new industry, and it has made investors large gains in a matter of months.

It’s true coronavirus has moved everything online… and the lockdowns have helped Peloton sell more bikes.

But the real key to its 277% gain in just 12 months is connected fitness is NEW. And a “new industry” means little or no competition.

This idea of racing someone half a world away on a stationary bike wasn’t a “thing.” There weren’t dozens of “connected fitness” companies trying to survive on penny margins like airlines.

Instead, Peloton’s solution was totally new and unique. This newness gave it a blue sky of opportunity to grow rapidly, with no competitors.

Peloton’s sales have jumped 983% over the past three years… And it now has over three million paying subscribers!

And more importantly, dozens of new and exciting “hypergrowth” stocks are available to play this new phenomenon…

And it’s opened up what may well be the biggest money-making opportunity I’ve seen in my entire career.

I don’t want you to miss it.

That’s why I’m getting on camera to show you everything you need to know to profit in this new world of rapidly growing stocks.

On October 12 @ 2 p.m. ET—during what’s gearing up to be the most important event in RiskHedge history—I’ll show you why this is happening and how to precisely target this new class of hypergrowing stocks for max gains.

It’s called “Hypergrowth America”… and you can sign up for free right here.

During the “live” event, I’m also going to do something I’ve never done before.

My research shows it has the potential to rise 10x from its current level faster than any growth stock ever.

This virtually unknown stock is creating a whole new industry from scratch… and has absolutely no competition right now.

You’ll hear all about it just for attending. Click here to reserve your spot.

I hope to see you there!