This is easily the most important RiskHedge Report I’ve written this year. I hope you’ll read it closely.

Today, I’m going to show you how we’ll come out of this bear market better than 99% of investors.

But first, I need to make something very clear: This has nothing to do with “calling the bottom” in stocks.

While I believe we’re in the vicinity of the bottom... and we’re very likely closer to the bottom than the top... I might be wrong.

Pinpointing a bottom with certainty is impossible. I refuse to risk my money on a guess, and so should you.

Stocks could easily drop another 20% from here as investors come to grips with how the coronavirus has frozen the economy. Or, the worst could be behind us.

Either way, it’s going to be okay. Because I’m going to show you a safe way to invest that’ll set you up to profit no matter how long the “coronavirus effect” lingers.

But it’s not the time to jump in full steam ahead.

Last month, US stocks dipped into a bear market for the first time since 2009.

Stocks plummeted 30% in 22 days, something that has NEVER happened before, as you can see: 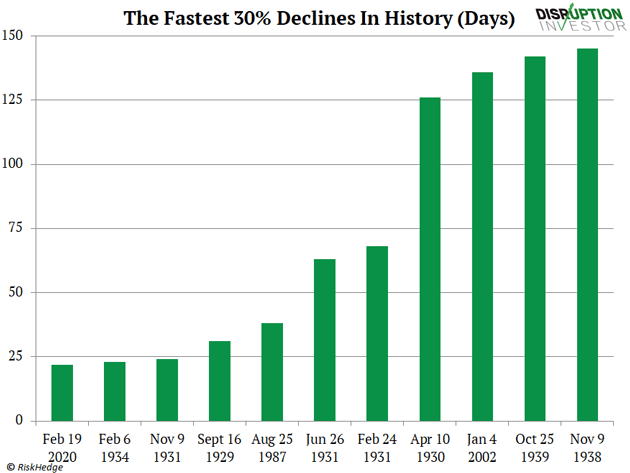 There have been 19 bear markets (the “official” definition is when stocks drop 20% from record highs) since 1929. They typically last a little over one year, during which, stocks drop 37%, on average.

The health of the US economy typically determines how bad things get for stocks. When bear markets arrived during a recession, stocks fell 37% over 18 months, on average. But when the economy is chugging along, the average decline is cut to 24%, and only lasts seven months.

The bad news is the coronavirus hit “pause” on the US economy. Although the lagging data won’t show it for months, we’re already in a severe and sharp recession.

But please keep in mind: Stocks have already experienced an “average” recessionary bear market. It typically takes stocks five and a half months to drop 30% from their highs. This decline was shoved into three weeks!

This is extremely important to understand.

It means we can now buy shares of world-class companies at a 30%+ discount to where they were just weeks ago.

We don’t need to wait months and months to get in on these bargains. We can start building our positions TODAY and set ourselves up for big gains ahead.

As I mentioned, now’s the time to use this rare window to start accumulating shares of world-class disruptors on sale.

And we’ll do it in a way that turns any further downside to our advantage.

In short, dollar-cost averaging is a proven tool for buying stocks in uncertain markets like we’re seeing today.

With this technique, you place a fixed dollar amount into an investment on a regular basis.

You’d be “scaling in” slowly as opposed to “going all in” from the beginning.

By investing this way during downturns, you accomplish two things: you lose LESS money on the way down and you make MORE money from the recovery to follow.

Let’s look at the power of this strategy using the most disruptive company on the planet: Amazon (AMZN)…

Instead, I want to zoom in on what happened to Amazon during the 2008 financial crisis.

No one talks about how AMZN fell off a cliff like nearly every other stock that year.

In just four months, the stock crashed more than 60%!

That’s a tough loss to stomach.

A third installment in October at $50…

And finally, a fourth in November at $40.

You’re risking less money each time… and you’re getting in at better entry points.

Here’s how it looks: 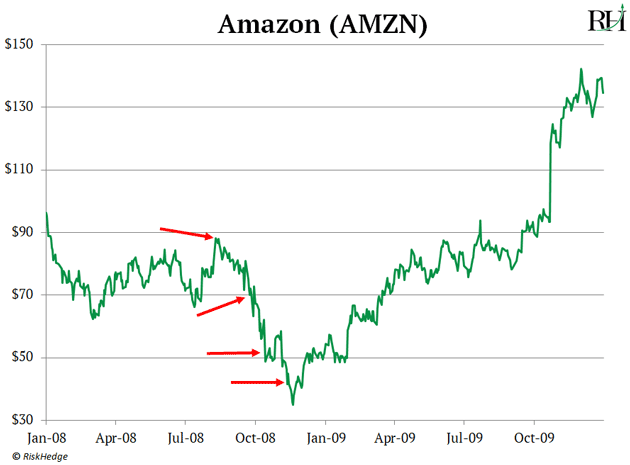 By doing it this way, you’re lowering your average cost.

In other words, you’re accumulating more shares for less money, as you can see here:

That means instead of losing 60% in the downturn, you’ve cut your losses to 39%.

Remember, we can’t know exactly when this market will bottom. And that’s okay. We don’t need to know the exact bottom to make the right move today.

The fact is, what you do NOW will define the next five to ten years of your investing life.

Now’s the time to start establishing positions in the most dominant and disruptive companies on earth.

We only get roughly one opportunity a decade to buy great stocks at “fire sale” prices.

Don’t let this one slip through your fingers.

If prices drop another 20% from here, dollar-cost-averaging will turn the decline to our advantage.

And if the bottom happens soon—we’ll set ourselves up for big profits by “planting our seeds” today.

And hands down the No. 1 way to stack the odds in our favor right now.