In Neverland, stocks swing from bull market… to bear market… and back to bull market again... in the span of a few months.

In Neverland, you may find yourself thinking: Why doesn’t the world make sense anymore?

And more importantly, how you can come out on top, financially.

Trump suspended flights from Europe. The NBA cancelled its season. Then came the news actor Tom Hanks caught COVID… all within a few hours.

I never thought I’d see pubs closed on St. Patrick’s Day in Ireland. Yet, they’ve been shut down in back-to-back years…

But that’s just the beginning…

Right before COVID struck, America’s economy was cruising. In February 2020, unemployment hit its lowest levels in over 50 years.

Then just a few weeks later, the number of Americans out of work hit its highest peak since the Great Depression. 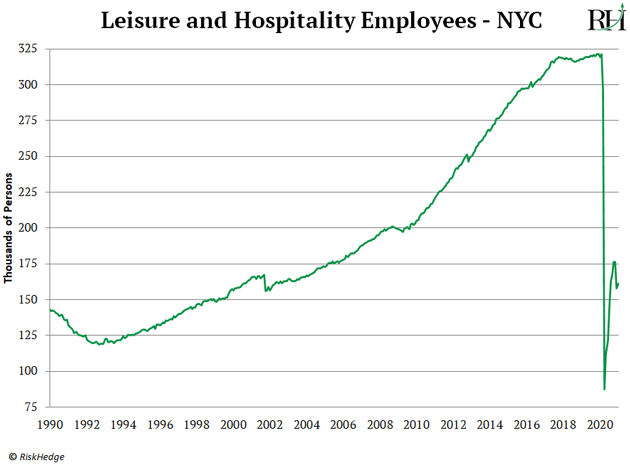 Something else just happened for the first time in American history.

As you know, tens of millions of workers were laid off during COVID. When folks lose their jobs, they usually can’t save much money.

But COVID was unlike any downturn ever. It was the only recession in history where the personal savings rate hit an all-time high. With everyone stuck at home, nobody was spending on vacations, restaurants, gas, or movies…

As you can see, Americans are saving more money than ever before... and by a long shot: 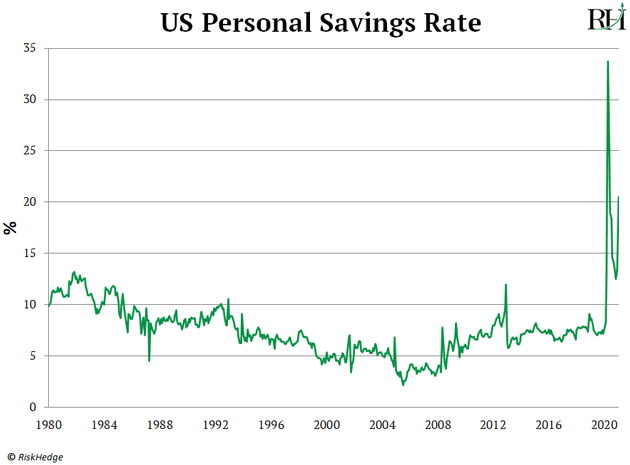 In fact, they saved $1.8 trillion more than they would have if COVID never happened, according to research from Oxford Economics.

In response to COVID, governments have “stimulated”  the economy like never before.

According to Reuters, governments pumped out over $15 trillion in stimulus in the last year alone.

Just last week the Biden administration threw another $1.9 trillion into the mix. You likely know a lot of this money is being wired directly into Americans’ bank accounts in the form of stimulus checks and tax credits.

You can debate if it’s good or bad.

The point is nothing like this has EVER happened before.

Just as the US government is handing out big wads of cash, America is reopening.

Restaurants, hotels and airlines have essentially been on life support for a whole year. For example, TSA passenger numbers collapsed 90% during COVID.

Now they’re set to “reopen”... and experience demand like they’ve never seen before. Passengers will be packed like sardines in airports this summer. (Good luck getting a reservation at your favorite restaurant.)

The COVID crash sunk US stocks into their fastest bear market ever.

Then stocks turned right around and launched into their fastest recovery in history. They hit record highs less than five months after collapsing.

But the “nevers” don’t stop there.

As you know, tech stocks have had a rough time lately.

But did you know that names like Zoom… Teladoc… and DocuSign collapsed more over the past month than during the COVID crash?

Investors have now experienced two 40%+ drops in many tech stocks in the past 12 months.

Meanwhile, many folks are making more money than they ever dreamed of.

I’ve been a casual observer on Reddit’s WallStreetBets message board for the past year. This is where investors banded together to drive GameStop’s (GME) struggling stock price up over 700% in less than a week.

Based on screenshots uploaded by members, many of their brokerage accounts have multiplied 5X to 10X over the past year.

Many say they’ve used the gains to put down payments on houses and to pay off student loans.

In fact, it would be weirder if stocks were behaving normally!

Most investors are confused right now. If that’s you, it’s not your fault. This is Neverland, after all.

Everything investors thought they knew has been disrupted.

But I want you to know that you don’t have to sit back, watch the craziness unfold, and “hope for the best.”

That’s because, in Neverland, Wall Street is working from an obsolete playbook.

As you know, Wall Street has ruled the markets for the past hundred years. Rich bankers and hedge fund managers have all the “inside” connections and knowledge. They have super-fast computers that make trades faster than you can blink.

In a “normal” market… it’s pretty much impossible to compete with them.

Their advantages were too big, too entrenched.

But in Neverland, where we find ourselves today, the playing field has been levelled.

In Neverland, you are just as experienced as a seasoned team of Goldman Sachs bankers.

Make no mistake: This new world of “nevers” has disrupted the status quo, catching many folks off guard. Especially Wall Street.

Sadly, this is the path most folks will unknowingly choose.

It’s hard to keep a cool head when the world you thought you knew is being fundamentally disrupted.

And potentially make more money investing in Neverland in the next year or two than most folks see in 20 years.

And I’ll keep it simple. My research shows there’s ONE MOVE you should make with your money today. Just one move… that can set you up to amass lasting wealth in the months ahead.

This will be—hands down—our most important event of the year. As you’ve seen, there’s a lot at stake. And I’ll show you exactly where to park your money today to come out on top of the wildest stock market we've seen in 11 years…

I’ll even give you my #1 stock to own in 2021 no matter where the markets go. This is unlike anything we’ve ever done at RiskHedge. So I hope you can join me. To lock in your spot (we expect more than 10,000 registrants), go here now.