A significant part of Trump’s campaign centered on the angst of the white middle class and the ongoing loss of jobs in the Rust Belt. And that focus gave him his margin of victory.

Trump promised to bring those jobs back, a sentiment that resonated powerfully with the electorate. The problem is—as we’ve talked about previously—that at least 80–90% of manufacturing jobs were lost not to companies moving factories to China or Mexico but to increased automation.

Those Jobs Are Never “Coming Back”

They are gone. And that trend is going to continue and accelerate.

I fully understand that if we do get corporate tax reform as we discussed before, along with some other reforms, it is possible that Apple would move its iPhone 10 factory to the US. But iPhones are increasingly assembled by robots. In a few years, those and other such products will mostly be made on largely automated production lines, whether in China or the US.

Note that Apple has 766 suppliers, of which just 69 are in the US. Manufacturing iPhones in the US would be more about the logistics of getting just-in-time components from those other 700 suppliers, which are all over the world. It’s not the “manufacturing” Trump refers to.

And that situation is playing out over hundreds of industries.

Much of what we buy today is absolutely reliant on a complex, seamlessly functioning global supply chain. Current or near-term jobs in manufacturing are not the critical issue.

The Revolution of Self-Driving Cars

Echoing what I’ve written about previously, we are rapidly entering the Age of Transformation. It’s not just the introduction of new technologies; employment and job creation are also changing extraordinarily quickly.

Let’s look at the impact of autonomous (self-driving) vehicles.

I am told they are actually available in beta form in Sweden, made by Volvo. Elon Musk promises us an autonomous car by 2020.

I think 2022–23 is more realistic. But sooner or later, there will be an explosion. Estimates are that by 2030, 25% of vehicles will be autonomous. (I want to thank my friend David Galland in his recent column for pointing me to a summary of these figures.)

I agree with David that the 2030 figure is likely to be far higher than 25%. The adoption of new technologies happens faster every year. Here’s a chart he used: 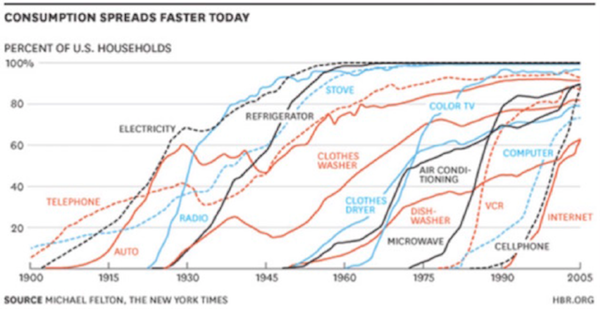 There are numerous benefits to autonomous driving, but an increase in total employment is not one of them. Automated driving will create jobs, just not as many as it destroys.

The total job loss just in the United States might approach 10 million. These jobs are not going to disappear in year one, but from the point of view of somebody working—and then suddenly not working—in an affected industry, the change will seem like it hit overnight.

And that is just one industry and one technology. There are literally hundreds of new technologies that are going to eat up jobs faster than they create them.

There are literally tens of millions of jobs in just the US alone that will probably vanish over the next 20 to 30 years. Of course, this happened every decade for the last 200 years with the introduction of new technologies. So, this is not exactly something new.

The difference, like I’ve written about before, is that now it’s happening much, much faster. Rather than moving from the farm to the factory to the office over 10 generations, we will be creating, destroying, and remaking whole industries in half a generation, making the always bumpy transition to a new workforce that much more difficult.

And of course, we need to remember that many new technologies and social inventions will create whole new categories of workers and job opportunities. The road ahead will hardly be a one-way street.

Making sure that we create more jobs than we lose is at the heart of tax reform. I promise you, there is a deep, direct connection between tax reform, the creation of new businesses, and employment rates.