We are coming to a period I call “the Great Reset.”

As it hits, we will have to deal with the largest twin bubbles in the history of the world. One of those bubbles is global debt, especially government debt. The other is the even larger bubble of government promises.

These promises add up to hundreds of trillions of dollars. That’s vastly larger than global GDP.

These are real problems we must face. It will mean forging a new social contract. It will also require changes to taxes and the economy. I believe that within the next 5–10 years, we have to end the debt and government promises.

What I mean by government promises are pensions and healthcare benefits. Governments assumed that taxes would cover their immediate costs. They thought future politicians would figure out the rest. Now the time is nearing when those “future politicians” are elected.

This Is the Worst Recovery Ever

The McKinsey Institute chart below shows how debt is split within the countries that make up the bulk of the world economy. 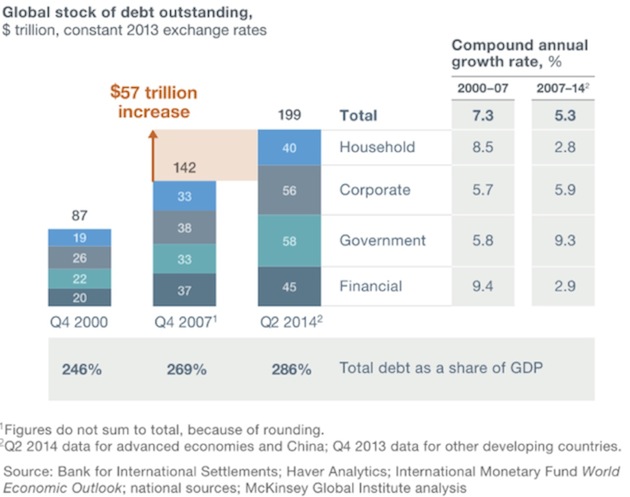 The debt-to-GDP ratio increased in all advanced economies from 2007 through 2014. And the trend is continuing: 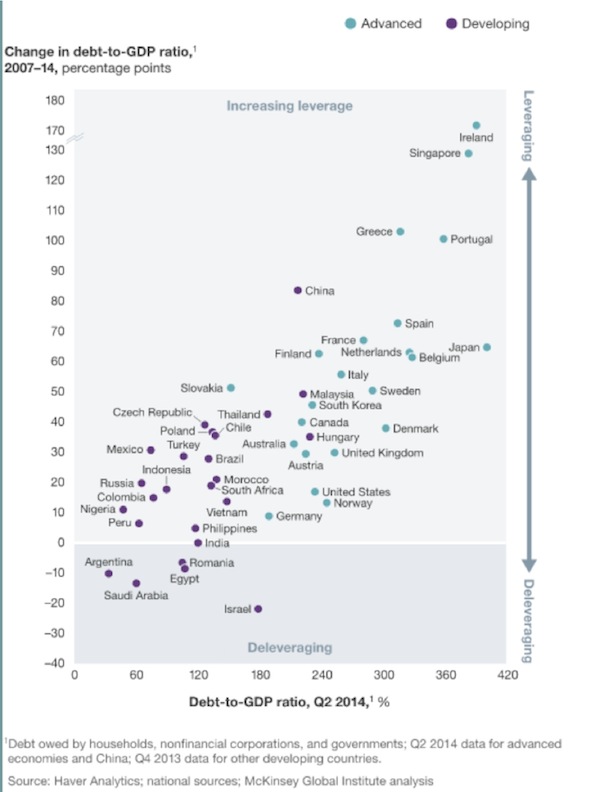 And Things Are Getting Worse

In fact, in just the first nine months of 2016, global debt rose $11 trillion. The average change from 2007 through 2014 was a little over $8 trillion per year. Global debt-to-GDP is now 325%, though it varies sharply by region and country.

Even worse, interest rates are slowly rising. As they do, so too does the cost of debt. In the US, according to my friend Terry Savage:

Now, with the Fed hiking rates, interest costs are set to soar. The Congressional Budget Office estimates that every percentage point hike in rates will cost $1.6 trillion over the next ten years!

That 1% rate hike will take roughly 3% more of our taxes every year. Governments must cover this with additional taxes, lower spending, or an increase in the deficit. If they increase deficits, there will be even more total debt and interest rate cost. And of course higher interest rates affect those of us who have mortgages and loans with floating interest rates.

And it is not just the US that faces a grave debt problem. Global GDP is roughly $80 trillion. If interest rates were to rise just 1%, $2 trillion more would go to pay that debt increase. That is about 1.5% of global GDP.

Repaying that debt requires either reduced future spending or some kind of debt liquidation. Those are the only options.

Sometime this year, world public and private debt plus unfunded pensions will surpass $300 trillion. That is not even counting the $100 trillion in US government unfunded liabilities. Oops.

A time is coming when people will realize that these cannot be met. Will voters decide to tax “the rich” more? Will they increase their VAT rates and further slow growth? Will they reduce benefits?

No matter what, hard choices will bring political and market turmoil.