I have good news and bad news.

A World Economic Forum (WEF) white paper called “We’ll Live to 100—How Can We Afford It?” has some interesting data. To begin, it breaks down life expectancy by birth year, showing a different picture than we see from simple averages. Here are the global numbers: 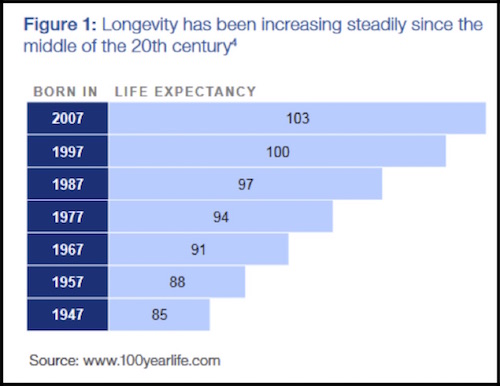 As far as I can tell, these estimates don’t consider the kind of major life-extending breakthroughs coming in the next few years. Rather, the methodology of the WEF paper seems to depend on extending current trends.

Here’s another table showing the differences among major countries for those born in the year 2007: 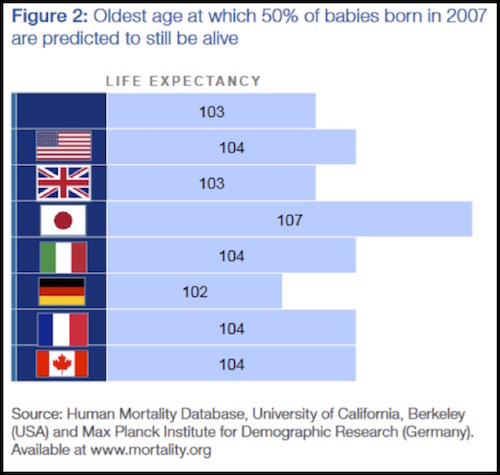 Again, this is astounding if correct. A Japanese child born in 2007, who is 10 years old today, has a good chance of living to 107. That will be the year 2114. Those in other developed countries are not far behind.

Better yet, the coming medical technologies will let us live to those ages or more without the decades of physical and mental decline that are now common. We’re not just increasing lifespans; we’re increasing “health spans” too.

It is likely that you will live much longer and healthier than you are currently planning to. Most of us will be happy with that outcome. The bad news is that you will have to make your money last those extra years.

While this is wonderful news for humanity, it will bring some challenges too. The world is not financially prepared to support as many retirement-age people as it will have to sustain in coming decades. We have some huge adjustments in store.

Specifically, we already have a huge retirement savings shortfall, both public and private. Adding millions more person-years to the equation will make the problem much worse.

The WEF’s white paper tries to quantify how much worse the personal retirement shortfall will be if current practices continue. Here is the bad news in graphic form: 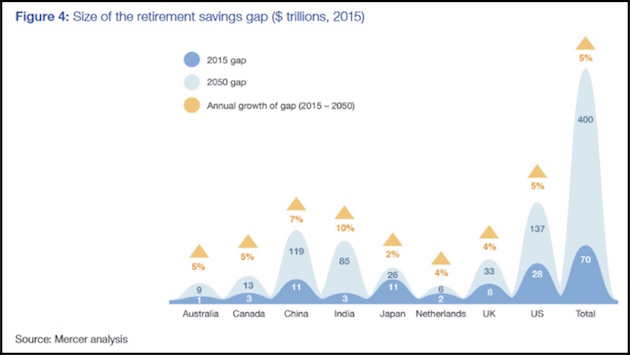 The bumps you see there are the differences between what is necessary to fulfill obligations (defined as 70% of pre-retirement income) and what has actually been saved or set aside to do so. The darker blue is the 2015 gap, and light blue is a 2050 estimate.

By 2050, the total shortfall in these eight countries alone will be $400 trillion. That number is so absurd that I feel very confident we will never have to face it. One way and another, some promises will be broken. The only questions are: whose and to what degree.

The present standard of retiring somewhere between ages 60 and 70 is not going to be sustainable when half the population lives to 80 or 90—which is already realistic today—let alone 100 or more. It’s just not possible.

Your dream of hanging up the work clothes at 65 and going on extended vacation will remain a dream until some later date.

But There Is a Solution

The solution may turn out to be something presently unimaginable. We don’t know where technology will take us and what opportunities it will create. We also don’t know what political alliances can create.

What we do know is this: An unsustainable situation will not be sustained. Retirement as we know it is unsustainable. It will give way to something else, and maybe soon.

Frustration is building in America because of the problems I highlighted above, and we could well see an administration and Congress that will push through a much less friendly VAT plus income tax increases, not cuts.