“The future progression of the pandemic remains highly uncertain.”

The Federal Reserve wrote those words to Congress in its recent “Monetary Policy Report.” These are usually rather vague, dry documents on everything the Fed is doing right and what could possibly go wrong. This report is more interesting than usual because so many things have gone wrong and may get even worse.

Not that the Fed has good answers, of course. But here’s what it does know.

Yet, little outbreaks keep popping up. Life is still far from normal in those places.

Here in the US, the New York/New Jersey crisis is easing but cases are rising elsewhere. Testing numbers are up, as is the testing “positivity rate.”  So are hospitalizations.

Those indicate actual virus spread. This was expected as more people circulate in public but could get out of hand if not handled well.

Former FDA head Dr. Scott Gottlieb said the states hardest hit by the latest coronavirus surge are "on the cusp of losing control.” Ten states, most of them concentrated in the South and West, have recently seen new record-high, seven-day averages of new coronavirus cases.

To be clear, I believe the initial closures were necessary, given what we knew at the time. They successfully flattened the curve. But they were a brute force strategy with very harmful economic side effects and needed to end quickly.

Scientists have learned a lot in the last three months. We can now attack the problem more precisely, as Mike Roizen and I explained recently.

But even then, we are not going back to normal until late this year, at best. More likely it will be 2021 before a vaccine can be successfully developed, tested, produced, and widely distributed. That means many more months with masks, social distancing, reduced travel, and no large gatherings, at least like we knew in the past.

And with seven states recently hitting record-high coronavirus cases and hospitalizations, the best-case scenario is still disastrous for big parts of the economy.

There was much celebration last week as retail sales showed a rather robust rise. Talk of a V-shaped recovery was in the air. Except that we have only roughly recovered to ~2015 in terms of GDP. The comments and table below come from Danielle DiMartino of Quill Intelligence (daily must-reading for me).

“First, the good news. E-commerce and food are the big winners. Sales in the three months ended May are running well above their prior 12-month average while employment was relatively steady. This should open up short-run opportunities for job growth in these two areas. Anecdotes back this as we’ve seen job hiring announcements in these spaces.

“Unfortunately, losers outnumber winners. Clothing, gasoline, electronics, food service & drinking places and autos highlight the sectors at risk for future job cuts should the current sales levels be sustained in coming months. These five red categories represent 11.1 million payroll jobs, more than twice the 5.3 million of the four groups that are in the green.”

We can see that in continuing claims for jobless benefits. While off the highs, they were stubbornly flat in June. 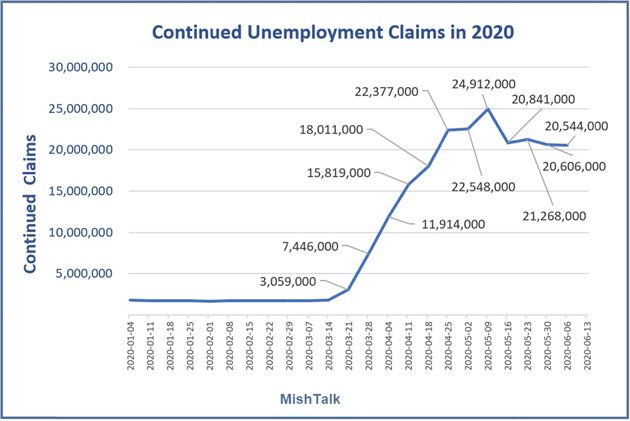 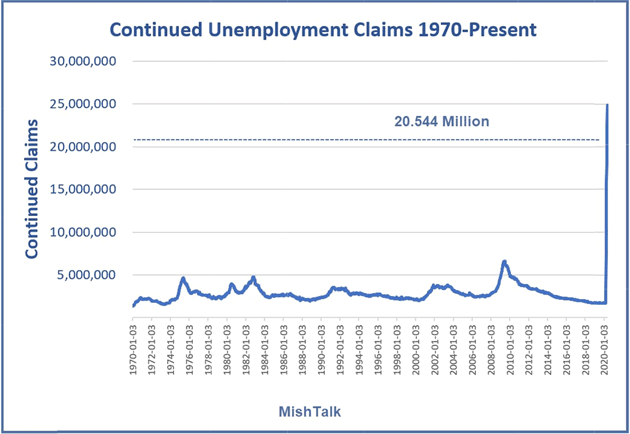 The economy is currently being sustained by federal government largess. Those 20 million continuing benefit claimants are all getting at least $600 a week.

Ironically, we have set the philosophical stage for Guaranteed Basic Income, at a much higher level than Andrew Yang’s $1,000-a-month proposal. Furthermore, many businesses are staying alive only through the Paycheck Protection Program’s forgivable loans.

Let’s jump to an insight from David Rosenberg, of Rosenberg Research.

“There is nothing in the data, as of yet, to show that personal incomes are rising on their own—the story remains one of cash-flow support from Uncle Sam’s generosity and the ability (and willingness) of millions of Americans to skip their loan payments.

“Spending premised on such weak underpinnings does not constitute an official recovery. Not to mention the reality of historical data showing that recessions end when jobless claims get closer to 500K, not 1.5 million, which is where we are right now.” 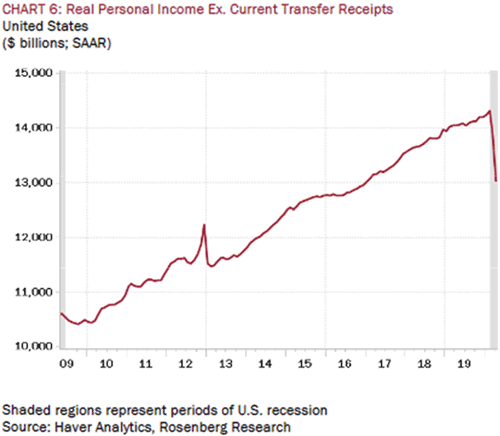 This isn’t something governors can easily reverse. They can let businesses open, but they can’t make consumers come back and spend freely. People have to feel safe; the economy can’t “recover” if even a small number don’t.

Recovering even 90% of the previous consumer spending isn’t enough. We need it all, or close to all. We will get there, but it is going to take time.