For the first time ever, banks’ grip on money is slipping away...

“Because that’s where the money is...” he said.

For pretty much all of America’s history, banks have held a monopoly on all things money.

Need a place to deposit your weekly paycheck?

Go talk to a banker.

Banks are happy to help. For a fee of course.

Bank of America (BAC), the second-largest American bank, has seen its profits surge 4,700%.

JP Morgan and Bank of America are the 10th and 13th biggest public companies not just in the US, but on earth.

And as we all know, bankers enjoy some of the biggest salaries around. In 2017 the top five US bank CEOs earned a combined $100 million. 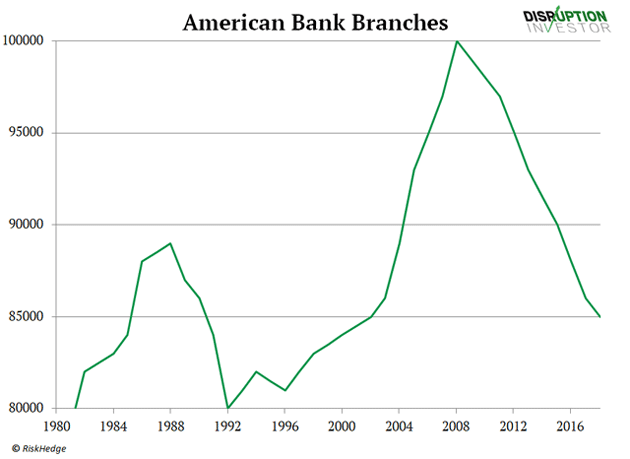 By now most Americans know how Amazon (AMZN) has changed shopping forever...

By selling stuff online for cheap, it shut down whole shopping malls and put big stores like Toys R’ Us, Radio Shack, and The Bon Ton out of business.

But what many investors don’t know is a similar revolution is happening in banking.

In many ways, banking is following the same script as retail... only 10 years later.

To deposit a check, I snap a picture of it with my phone. The money lands in my account within seconds.

Foot traffic into branches has fallen close to 50% in the past decade. It’s expected to fall another third in the next five years, according to financial research firm CACI.

Last year more than half of all mortgages were issued by “non-bank” lenders. That’s up from just 9% in 2009.

In fact, six of the top ten mortgage lenders in the US today are non-banks.

Quicken Loans is both America’s largest mortgage lender and the fastest growing firm in the industry.

Quicken does not operate branches. Instead it evaluates borrowers using online applications. And it connects with its customers online and by phone.

Quicken is owned by Intuit (INTU)—a powerhouse “autopilot stock” I’ve liked for a long time. Its stock chart is a thing of beauty: 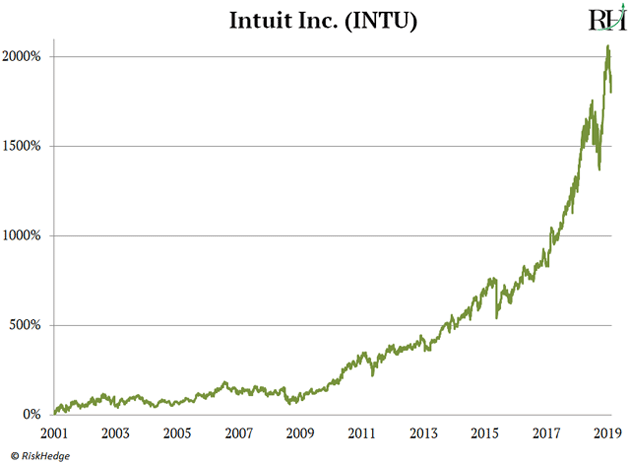 They both get roughly half their revenue from managing clients’ money.

But online “robo-advisors” are invading this lucrative business.

Robo-advisors are online platforms that give you automated, computer-driven financial planning services.

They’re typically far cheaper than getting financial advice from a bank.

Vanguard set up its robo-advisor service in 2018. US investors have already entrusted it with $130 billion. And it’s growing by 10–15% per year.

Vanguard operates completely online. It avoids all the costs and hassle of running physical branches. This allows it to offer the same services as a bank, but for far cheaper.

It was how they attracted new customers. Remember when you used to get a free toaster for opening a savings account? Once folks walked in the door, banks could “upsell” expensive banking services.

These days, maintaining marble floors and fancy lobbies is mostly just a waste of money.

Sure, very high net worth individuals may still care about these things. But most Americans just want a fast and convenient way to manage their money.

According to a 2014 Wall Street Journal study, it costs a bank roughly $4 every time you make a transaction in one of its branches.

But the average online transaction costs the bank just 17 cents!

In other words, costs drop 95% when you bank on the internet.

The average bank branch in the US costs roughly $2–4 million to set up. It costs another $200,000–400,000/year to operate, according Mercator Advisory Group.

US bank Wells Fargo (WFC) operates roughly 8,000 branches in America. It costs between $1.6–3.2 billion/year to keep them up and running!

Disruption in banking is still in the early innings. The average guy has no clue this is happening. That’ll change as big name banks that can’t adapt start to die off.

And keep in mind, the $1.1 trillion in wealth won’t vanish. Instead it will change hands. Hundreds of billions will be up for grabs as disruptor stocks shake up banking, just like they did to shopping.

This is a huge moneymaking trend we’ll be covering for a long, long time.

If you’re interested in investing in this trend alongside me, check out a Founder’s subscription to my new research advisory, Disruption Investor. One of my top buys is a big disruptor that in many ways is becoming the “Amazon of Banking.”

Fair warning: tonight is your last chance to claim your Founder’s deal. It gets you in for just $49, instead of the $199 that non-Founders will pay.

The doors shut in just a few hours, so you’ll have to act now if you’re interested. Go here to lock in your Founder’s spot.

Have a great holiday weekend!