What did you do last night?

If you’re like the vast majority of Americans, you probably watched TV.

Statistically speaking, you probably did NOT watch Netflix… Amazon Prime… Hulu, Disney+, or any other streaming service.

According to top research firm eMarketer, US cable subscriptions peaked at 100 million households in 2010.

Only 16 million households have “quit” cable.

In other words, 84 million American households still fork out an average of $100 bucks/month for cable! 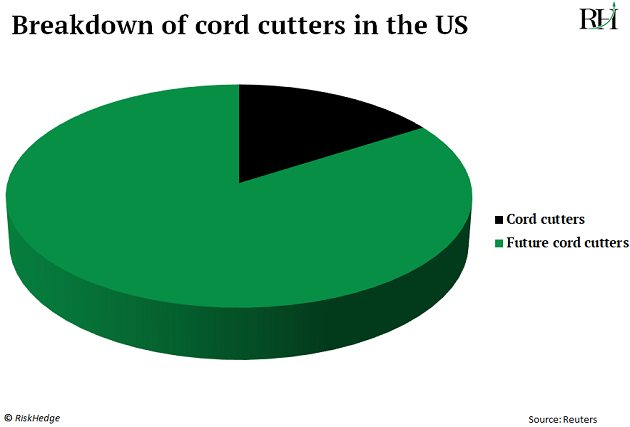 But it won’t stay that way for long.

In fact, I wouldn’t be surprised if this circle is almost half black by the end of the year.

You see, Americans had been cutting the cord at a slow and steady pace.

Everything changed last year. Bloomberg reports an “avalanche” of Americans quit cable in 2019. A record 5.5 million households cut the cord—a 70% jump from 2018.

And that’s just the beginning…

Last year, the US had:

That’s 281 million people... out of 327 million total Americans. In other words, very soon, practically every American adult will subscribe to at least one streaming service.

Apple’s poured over $6 billion into its streaming arm, Apple +.

And Google, which owns YouTube, collects over $15 billion a year on streaming.

There are a number of reasons why cord cutting has hit an inflection point.

The average streaming service costs $10 a month, compared to $100 for cable. Many folks are fed up with paying for 495 cable channels they don’t watch just to get the five they do.

But perhaps the most important reason of all is also the simplest...

Think about the shows and movies folks talk about today.

The Irishman… Making a Murderer… Stranger Things… The Crown… are all on Netflix.

The Handmaid’s Tale is produced by Hulu.

And The Mandalorian—the most in-demand TV show in the world, according to Parrot Analytics—is on Disney’s (DIS) new streaming service.

The most-watched show on cable last year was The Big Bang Theory. An average of 17 million viewers tuned in to watch it.

But over 26 million folks watched the season premiere of Netflix’s Stranger Things 3 on release day.

Companies that make hit TV shows are shifting toward streaming, too. HBO produced several “hall of famers” like The Wire… Soprano’s… and Game of Thrones. And its streaming app goes live this May.

Despite all of this…

The majority of America’s eyeballs are still with cable TV... for now.

Think back to the chart I showed above.

But don’t make the mistake of thinking you’ve “missed the boat.”

Netflix is merely the first of many red-hot streaming stocks we’ll see over the next year or two.

The huge sums of money at stake practically guarantee it.

And the five biggest cable stocks are worth over $600 billion.

This giant heap of money is all up for grabs.

As cord-cutting turns into a full-blown avalanche, those billions will be released into the stock market.

Now’s the time to make the biggest streaming profits as cable TV gets wiped out for good.

I’ll be talking a lot more about this disruptive megatrend over the next few weeks, including how to play it for the biggest gains.