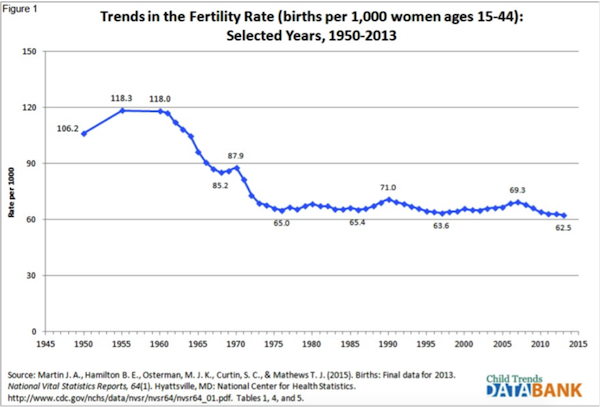 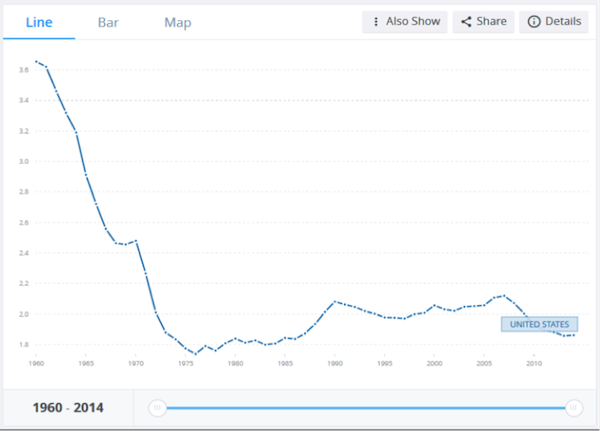 Demographers worry that a dwindling birth rate will hurt economic growth and tax revenues needed to fund transfer payments to a growing elderly population. Some project that fertility rates will rise when the economy expands.

If the Trump administration achieves higher economic growth, it’s unlikely to do so fast enough to support the mandated 9% increase in entitlement spending for older Americans without more deficit spending. Trump says he intends to preserve Social Security and Medicare spending levels, but he seems unaware of the demographic headwinds we are sailing into.

Few policymakers grasp the profound impact of an inverting demographic pyramid, simply because it has never happened before.

The Cure for a Broken Dependency Ratio

History does show, however, that there’s been a persistent downward ratchet effect in the US fertility rate: the downward movement may be temporarily interrupted, but then it resumes again.

Moreover, this is a long-term trend. Fertility rates began falling prior to World War II, despite the temporary uptick that led to the baby boom (blue segment of line). This chart shows births per 1,000 people in the US. 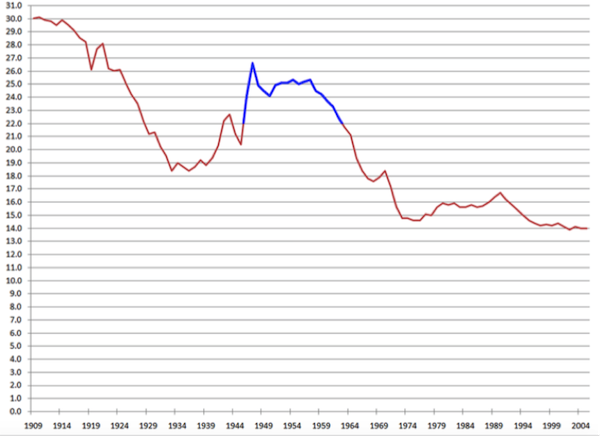 In short, the population dynamics that have broken the dependency ratio and created the unfunded liability crisis worsened in 2016. This dynamic won’t change fast enough to prevent a crisis that can only be fixed by extending health spans.

With longer health spans, older people can live healthier and longer and be more economically productive. They can then support their own retirements instead of relying on fewer and poorer young people to do so.

Be the first to learn about vast profit opportunities most investors have never dreamed of. Biotech expert Patrick Cox spotlights the latest breakthroughs and the innovative companies producing them each week—from non-invasive cancer treatments, to age-reversing nutraceuticals, to vaccines that kill any virus­. Get Tech Digest free in your inbox every Monday.