Despite heavy opposition, Trump is more insistent than ever on imposing quotas or tariffs on steel imports.

However, it makes a big difference whether the administration decides to go with quotas on current steel imports or initiate a tariff. Quotas would be harmful, but a tariff would be far worse.

Let’s look at the numbers to see who exactly would actually be damaged.

First, for all the talk about trade deficits with China, we don’t import all that much steel from China. In fact, China isn’t even in the top 10 countries that we import steel from (see below). 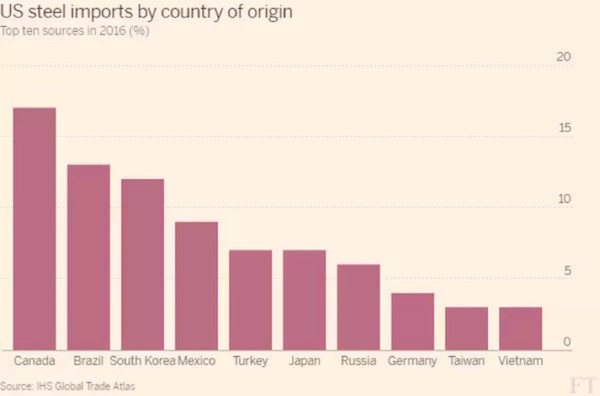 Secondly, using national security as an excuse to impose tariffs is really fraught with potential problems. The Financial Times report (well worth reading), in which our chart appears, notes two:

The first is that in the trade realm, invoking national security to erect barriers is considered a nuclear option. World Trade Organization rules include a national security exemption designed to be used in times of war. But many experts believe the forthcoming steel move would flout those rules and would thus be challenged by other WTO members. Such a challenge in itself could be dangerous. It would be the first real test of the WTO’s national security exception. Were the WTO to find against the US and the Trump administration to ignore that decision, it would be a huge blow to the WTO’s credibility. Were the WTO to find in the US’s favor, experts fear it could give carte blanche to all WTO members to invoke national security more often, leading to a new protectionist free-for-all.

The second is that the US is the world’s largest steel importer and a broad move on steel would probably hit US allies such as Canada, Germany, South Korea, and Mexico far more than China, its real intended target. In an unusual move, it has prompted NATO allies to complain and to try to have the Pentagon lobby on their behalf.  It also could provoke a messy trade war with other countries feeling compelled either to impose their own national security restrictions on steel imports or to retaliate against the US in other ways.

The third reason to oppose tariffs is that clamping down on steel imports threatens considerably many more jobs than “protecting” the steel industry from foreign competition can save. As Dan Pearson of the Cato Institute noted recently: “Steel mills employ 140,000 workers.”

“Manufacturers that use steel as an input employ 6.5 million, 46 times more.” Steel mills’ $36 billion of productivity in 2015 represented just 0.2 percent of US GDP, Pearson explains, while the economic value contributed by US firms that use steel was 29 times larger.

We actually have a recent case study. George W. Bush approved steel import tariffs of 30% in 2002. What happened? Two hundred thousand American workers lost their jobs (see the chart below). 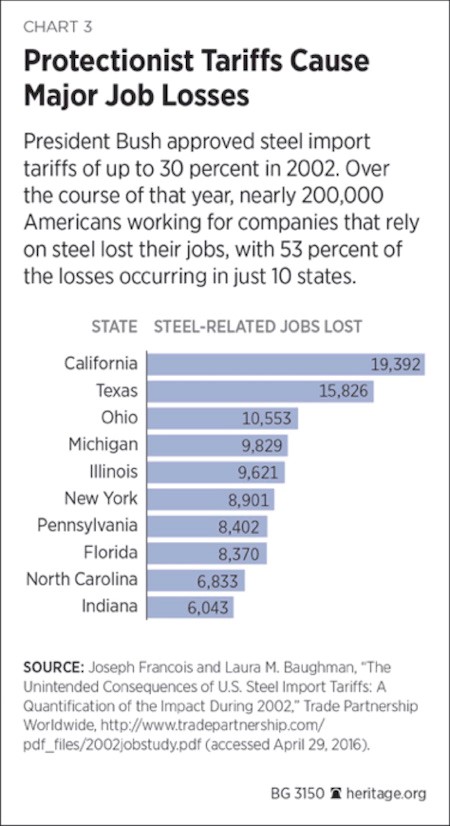 Scores of different types of steel are used for special manufacturing processes and equipment. The US doesn’t manufacture everything we need or have the capacity to do so. Thus, a tariff would increase costs to consumers without doing one thing for steelworkers.

Much Has Changed in 35 Years 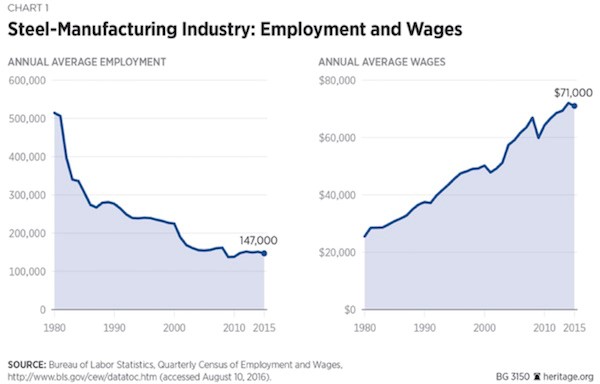 As in so many industries, we simply don’t need the number of workers that we used to. Steelworkers, whose wages have tripled, are producing five times the amount of steel per hour worked as they did 35 years ago.

China is already working to curb its steel production capacity, as demand for steel is flat to down. Now I agree that Chinese overproduction is forcing global steel prices down, but do we really have a problem when gasoline prices go down? Do we feel sorry for the oil companies?

No doubt American steelworkers and steel companies would love to see barriers to entry for their product. I bet McDonalds would like to have Jack-in-the-Box stores banned, too. Ultimately, higher prices offset the theoretical benefits of a steel tariff or quota.

You and I are the ones who pay.

The federal government has other ways to punish foreign competitors. In April, President Trump visited the Wisconsin headquarters of Snap-on Tools, where he signed a “Buy American, Hire American” executive order. The bureaucracy is now working to implement the order.

By enforcing these laws, President Trump can redirect billions of dollars in spending from foreign companies to US suppliers—assuming US suppliers exist. They may not, in some cases, and they may cost more if they do.

Defense contractors will face some serious headaches. Other trade actions are popping up, too.

Boeing has asked the government to investigate what it considers to be unfair competition by Bombardier, a Canadian aircraft manufacturer. If Boeing succeeds in sidelining Bombadier, other US companies are likely to make similar claims.

But truth is, dozens of countries manufacture major parts of those Boeing airplanes; Boeing doles out contracts to other countries in order to encourage them to buy the planes. Many of those components are made in Canada. And I will bet you a dollar to 47 doughnuts that significant components of Bombardier planes are made in the United States by US workers.

It behooves us to remember that Canada and all our other trade partners have options, too.