How many cardboard boxes have landed on your porch in the last month?

For many Americans, between Christmas presents and their regular Amazon (AMZN) deliveries, the number is high. After all, Amazon delivers over 600 million packages a year. That’s a lot of cardboard.

Things are a little different in South Korea. The country’s ecommerce powerhouse, Coupang (CPNG), offers all the perks Amazon does, like free delivery. But it takes a “zero packaging” approach, with 75% of deliveries arriving in reusable packages.

Over time, those savings add up.

Last week, we talked about the risks of owning Chinese stocks, like ecommerce giant Alibaba (BABA). I mentioned I liked a similar company, based in business-friendly South Korea, much better.

Well, that company is Coupang, which CEO Bom Kim founded in 2010.

By 2019, Coupang had captured 5% of South Korea’s $128 billion in ecommerce sales. Industry experts expect the country’s ecommerce sales to shoot to $206 billion by 2024. That’s a 10% annual compounded growth rate. Meaning Coupang would keep growing at a rapid clip simply by holding onto the market share it already has. But I expect it to do more than that. 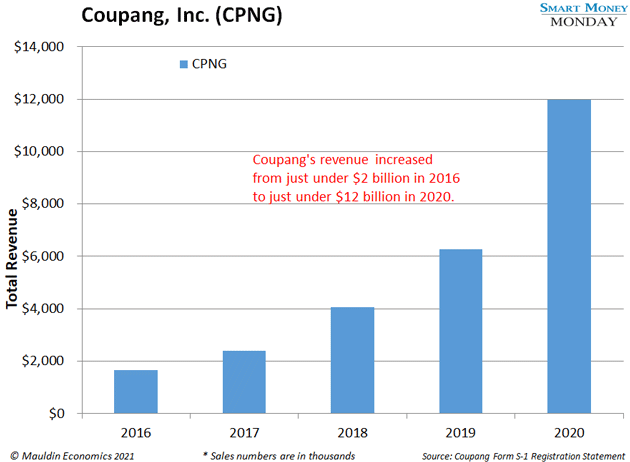 Looking out to 2024, I think Coupang could do $36 billion in sales. That would push its share of South Korea’s ecommerce market up to 17%. And it would still have plenty of room to grow. (For perspective, eMarketer expects Amazon to rake in 41% of all US ecommerce sales this year.)

Nearly 100% of orders arrive the next day or faster. It even has a service called “Dawn Delivery.” If you’re out of coffee and eggs for breakfast, or anything else, you can place an order by midnight, and it arrives at your door at 7 am.

Like Walmart founder Sam Walton or Amazon founder Jeff Bezos, Kim is making a ton of money doing something better, faster, and cheaper than his competitors. Investing alongside this sort of savvy owner-operator is almost always a good bet.

However, shares are not quite cheap enough to pull the trigger on Coupang yet.

It went public in March at around $50 per share. And it’s sunk around 40% since. 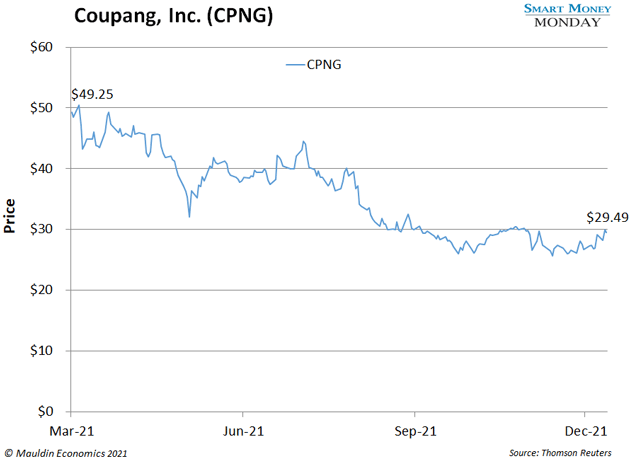 Meanwhile, 2021’s class of IPOs is down an average of 9.4%, according to iposcoop.com. And the Nasdaq has risen 16% year to date. So, the stock is pretty beaten up by any measure.

Buying radically undervalued stocks is a core part of my investing strategy. When I like a company, but it isn’t cheap enough, I watch and wait for an opening. That’s what I’m doing with Coupang.

Like Amazon in its early days, Coupang isn’t profitable yet. The company is investing in rapid growth. As it scales up, it should begin to show profits.

At roughly $30 per share, the market is valuing Coupang at 12x my $3.6 billion estimate of 2024 EBITDA. That’s a reasonable price, especially since Coupang would still have ample room to grow at that point.

So, for now, add Coupang (CPNG) to your watchlist. It’s the Amazon of South Korea. I’ll let you know if and when it’s time to buy.

A Better Way to Invest in EVs than Tesla…

It’s Not Enough to “Invest in What You Know”