Several friends have mentioned this to me lately. They’ve been following along in Smart Money Monday. So, they know I’m always hunting for undervalued Wealth Accelerator stocks. Why not give China a look?

Well, they’re right about one thing. Chinese stocks are pretty beaten up—and possibly cheap. The KraneShares CSI China Internet ETF, for example, has dropped nearly 50% in the last 12 months. Over the past five years, it’s flat.

Despite the carnage, I wouldn’t put a single penny into Chinese stocks, for reasons you’ll quickly see.

Alibaba checks plenty of boxes. It’s the dominant ecommerce company in China. Despite its hefty size, it continues to grow at a double-digit clip. And it’s cheap—the stock is sitting near 52-week lows. 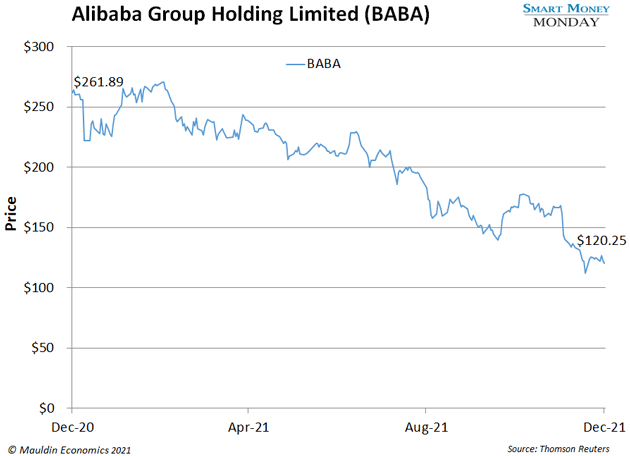 Friends have been prodding me about Alibaba since at least 2017. And my answer is still the same: No.

When US investors buys shares of Alibaba, they’re really getting shares of a Cayman Islands holding company.

It’s a complicated setup. You’ve got the main company in China. But the Chinese government restricts who can own certain Chinese companies. So, to work around that and get money from US investors, the China-based company pairs with a Cayman Islands-based holding company. And that is the company you’re actually buying shares of.

To most investors, the two companies appear to be one and the same, but they’re not. The holding company does not even have an equity stake in its China-based counterpart.

The crazy part is… this is a common setup for Chinese stocks. Over 250 Chinese companies are listed on US exchanges. Their total market cap is over $1 trillion. But the overwhelming majority of these stocks use the Cayman Islands structure I just described.

Frankly, I’m surprised this hasn’t triggered more alarm bells. I’ve been aware of it for years. And it’s become enough of an issue that the SEC put out a bulletin about it in September.

Maybe you think I’m splitting hairs. Who cares where the company is based? But these stocks pose a serious risk to investors…

DiDi is another Chinese company using the Cayman Islands setup. It went public in June 2021 at $14 per share. All told, it raised $4.4 billion, with a lot of that coming from US investors.

A few weeks later, The Wall Street Journal reported that DiDi was looking to go private after running into regulatory and cybersecurity issues. As of writing, the stock has sunk over 50% from its $14 IPO price.

All that cash it siphoned from investors… poof! Now it will likely use the money to go private at a lowball offer. 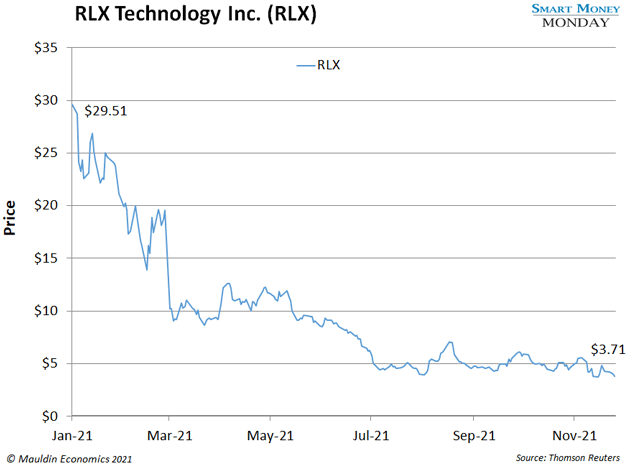 Because of the political risks in China, and the lack of shareholder protection with these stocks, there’s almost no price that could induce me to buy.

Long story short, I only invest in companies based in countries that respect private property. It’s just common sense, so I don’t even bother to include it in my Wealth Accelerator checklist. Why mess around with a stock when political machinations could wipe it out overnight?

I’m always interested in opportunities in places like South Korea, though. South Korea is the antithesis of China—it’s an emerging market that’s friendly to businesses and their US shareholders. In fact, I’ve found an exciting South Korean company that checks a lot of the same boxes as Alibaba—but without all the worrisome risks.

I’ll share all the details with you next week. Until then…

P.S. Mauldin Economics’ most elite service—The Alpha Society—has opened for a limited time. If you choose to accept this invitation to join, you will receive full credit for any of your active subscriptions towards your membership cost, dollar for dollar. That means if you are a new member of my High Conviction Investor service, you will get full credit. To find out how to access our most valuable suite of investing ideas—at the lowest possible price—please take a look at this time-sensitive invitation. The doors close just 3 days from now.