Not great for consumers. But it does mean a little-known investing secret I shared with you in January will continue to be a great place to park cash.

I’m talking about the Series I Bond…

The I Bond is unique because of how the interest payments are calculated. There are two components. The first is the fixed rate, which the US Treasury sets. It’s currently 0%. And the second is the variable rate, which is tied to the CPI-U, one of the government’s inflation metrics. 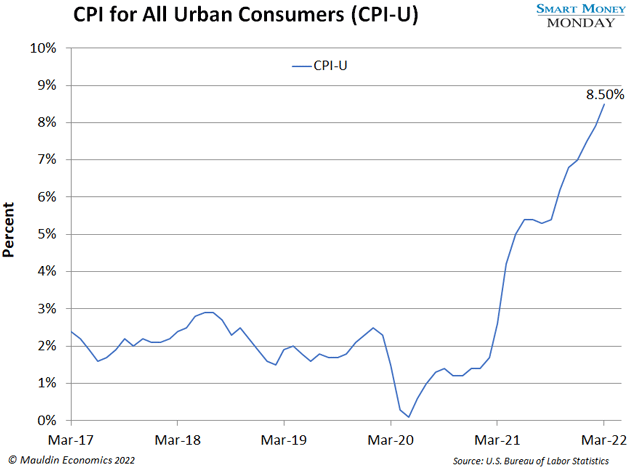 The Treasury doubles that figure to calculate the I Bond interest rate.

If you buy I Bonds today, your variable payment will be tied to the November 2021 inflation reading. That means you’d receive 7.12% for the next 6 months. The 9.62% rate only kicks in for I Bonds purchased May through October of this year. Then the rate will reset again in November.

There’s also a minimum holding period of one year. And if you sell before five years are up, the Treasury deducts the previous three months’ interest.

So, this isn’t the place to hold cash you need to pay your monthly bills. However, it’s a fantastic alternative to holding your other cash in a savings account, or even in US Treasuries, which still have yields below their long-term averages.

I don’t have a crystal ball. But the consensus is that the Fed will hike rates a few more times this year, which should help temper inflation.

That said, certain elements of the CPI-U are bound to stay high over the next few quarters. Take housing, for example. Or as the CPI-U calls it, “shelter.” Shelter makes up around 33% of the CPI-U reading. Over the last 12 months, it’s grown at its fastest rate since May 1991. And it shows no sign of pulling back.

I also expect gas prices, which have doubled over the past 12 months, to stay high. But gas only makes up around 4% of the CPI-U.

Whatever happens next, you can lock in juicy I Bond rates now through October. If you haven’t purchased $10,000 worth of I Bonds this year, I recommend picking some of this low-hanging fruit. You can buy the bonds directly at TreasuryDirect.gov.