Investors are pointing to Russia’s war on Ukraine to explain the spike. That makes sense. Russia is the world’s third-largest oil producer and the top exporter to global markets. It produced 12% of the world’s oil supply last year. And 60% of its oil exports went to Europe.

Now the West is refusing to do business with Russia, which should crimp supply. Hence the recent spike. But if you zoom out, you’ll see oil prices have been on a choppy upward march since April 2020, when they briefly went negative. 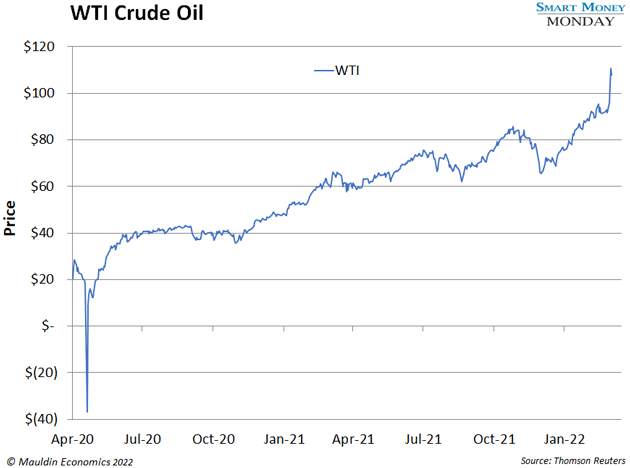 The oil industry runs in cycles. Oil prices rise, production increases, supply exceeds demand, and then prices fall. Rinse and repeat. As the saying goes, the cure for high prices is high prices.

Problem is production isn’t increasing much this time around.

One of the best indicators of oil production is the Baker Hughes international rig count. It measures the number of active drilling rigs around the world. 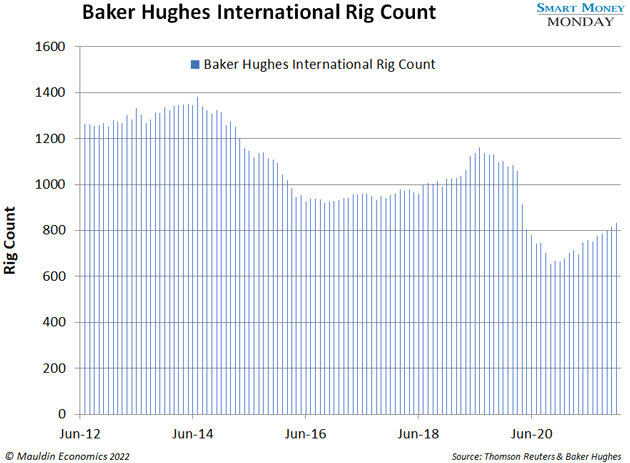 The last $100-per-barrel cycle lasted around three years, from March 2011 to August 2014. During that stretch, the mood was drill baby drill. The oil boom even spilled into popular culture, with Greg Zuckerman’s The Frackers becoming a nationwide bestseller.

Today, the mood is different. Everyone’s looking to green energy.

They changed their spending plans after the last energy bear market. Instead of plowing money into exploration and production, they’re returning cash to shareholders through dividends and share buybacks. Oil majors like BP (BP), Exxon Mobil (XOM), and Chevron (CVX) plan to spend $38–$41 billion on buybacks this year, according to the Financial Times.

Let’s take a closer look at BP, and you’ll see how this is playing out…

From 2011 to 2014, BP spent an average of $27.5 billion annually on capital expenditures and acquisitions. In 2021, it spent less than half that—just $12 billion. Analysts expect that figure to stay low for the next few years.

Meanwhile, BP plans to pour $3­–$5 billion annually into alternative energy investments for the next eight years. And it could spend over $4 billion on buybacks this year alone. That’s more money pulled away from oil production.

Without increased production from BP and its peers, there won’t be enough supply to push oil prices down.

Even if EVs grew to 5% of the market, which could happen, it wouldn’t dampen oil demand by much. In fact, the International Energy Agency doesn’t expect global oil demand to peak until 2030.

I particularly like BP here. BP just announced its plan to dump its 19% stake in Russian oil giant Rosneft. That is going to sting—it will likely lose a few billion on the sale. But even after accounting for the loss, BP is still an inexpensive stock.

BP also sports a steady 4.5% dividend yield. And, as I mentioned earlier, it will likely return more cash to shareholders through buybacks.

Oil is going to stay over $100 for some time, and not just because of Russia. It’s because of cycles and sentiment. BP is a great way to get exposure to higher-for-longer oil.