Sometimes the smartest guys in the room make poor choices.

Earlier this year, Harvard University announced that its $50 billion-plus endowment no longer invests directly in fossil fuels. And it doesn’t plan to, ever again.

First, fossil fuels, or “brown assets,” are bad for the planet. And second, it’s virtually certain that green energy will replace them. In other words, fossil fuels will go the way of the buggy whip. And their stocks will sink to zero.

Let’s get one thing out of the way—I’m not going to tell you whether fossil fuels are good or bad. That’s not the point of Smart Money Monday. But I will say that fossil fuels are not disappearing anytime soon. And the companies that produce them can still deliver impressive gains to shareholders.

That figure has barely budged since 2009. Sure, natural gas has taken some share away from coal. But by and large, fossil fuel use has not changed, as you can see in the chart below. 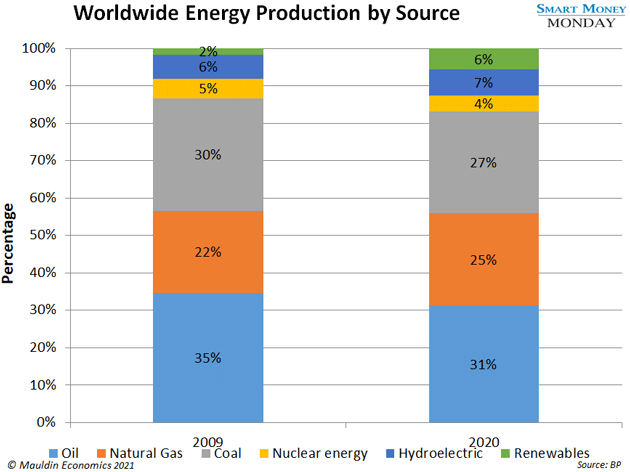 The market seems to recognize this…

The Vanguard Energy ETF (VDE), which holds a basket of fossil fuel stocks, has crushed the S&P 500 this year. It’s soared 60%, while the S&P hasn’t even done half as well. 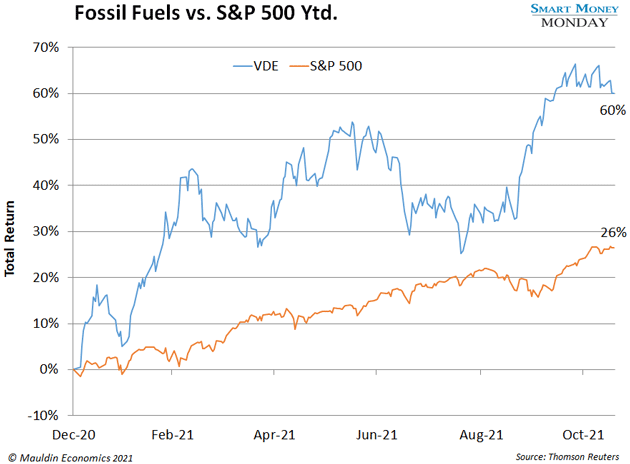 Will this continue? I think it will.

Duke University Professor Alon Brav and his coauthor J.B. Heaton summed up the situation well in a recent paper: “Brown assets could turn out to be highly valuable if the world fails to transition out of the high-carbon economy.”

A zero-carbon world would require massive cooperation from countries like China, Russia, and Saudi Arabia. Together, they account for 27% of global oil production. And China alone accounts for 14% of its consumption.

These countries do not plan to evolve. As Saudi Energy Minister Prince Abdulaziz bin Salman recently said: “We are still going to be the last man standing, and every molecule of hydrocarbon will come out.”

That doesn’t sound like someone racing to turn off the oil spigot.

Chevron (CVX), for instance, trades at a 4.6% dividend yield. And it’s a good option for investors looking for more exposure to fossil fuels. I own shares, and so does Warren Buffett’s holding company, Berkshire Hathaway. In fact, Berkshire picked up more Chevron shares in the 3rd quarter.

BP (BP) and Exxon Mobil (XOM) are great options, too.

It’s riskier than the oil majors I just mentioned. The company emerged from bankruptcy less than a year ago. But it’s set to return lots of cash to shareholders through dividends and share repurchases. 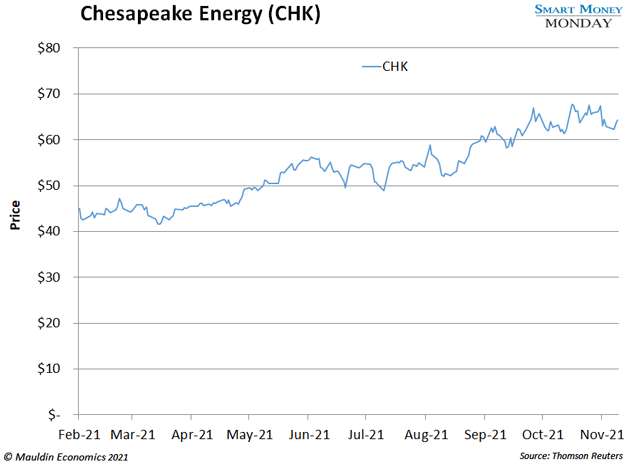 The stock, which I own a bit of, still carries some stigma from the bankruptcy. But the company has put its troubles behind it.

Today, Chesapeake has a reasonable 2.8% dividend yield. And it pays the dividend out of profits—not additional borrowing. The company has a rock-solid balance sheet, with very little debt relative to its free cash flow. Plus, after its recent purchase of Vine Energy, Chesapeake is one of the cheapest energy companies out there.

My goal is to help you make money. So, if I see profitable opportunities in green energy, or anything else for that matter, I’ll share those with my readers, too.

On that note… You might have heard that I’m working on a new premium advisory here at Mauldin Economics. This is where I’ll share my most profitable, highest-conviction picks. I like to call them “wealth accelerators.”

You’ll hear more about this in the coming weeks. So, please check your inbox. Until then, enjoy a happy and healthy Thanksgiving.