You know the group...

Meta (formerly Facebook), Amazon, Netflix, and Google—or FANG, for short. They’re four of the most well-known companies on the planet.

Ever since the FANG acronym caught on in 2013, these stocks have taken a wild ride higher. And the nearly 10-year upswing makes sense: They were hypergrowth companies.

Each stock managed to grow revenue at a remarkable clip:

It’s been an incredible run, but as I’ll show you, complacency has hurt their year-to-date returns. Here’s why this matters…

There’s a big “open secret” in Silicon Valley that’s spreading, one that has already reached three-fourths of FANG. But the market has yet to recognize its impact on one remaining company.

I believe we can tap into this opportunity before it’s priced into the stock… but we need to act fast.

FANG stocks have had a rough year, as you can see below: 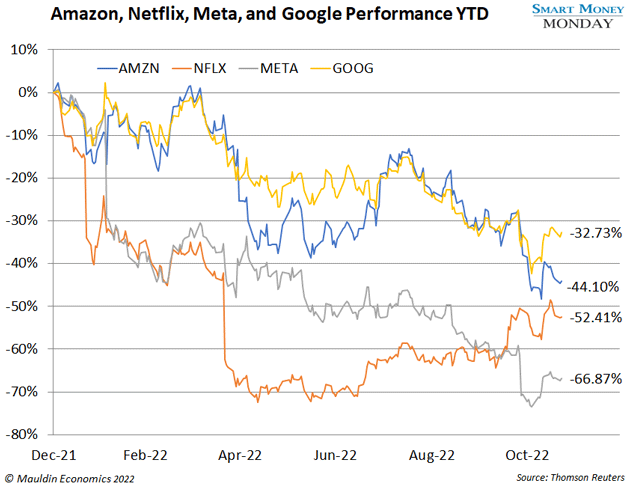 Regarding revenue growth, many of these companies got lazy. They lost their financial discipline. Revenue grew, but so did costs (e.g., labor).

These businesses are special, though. They don’t need a bloated labor force to generate more revenue because they exhibit the holy grail in business: zero marginal cost.


Each additional dollar of revenue at Google, for example, can come without an increase in staff. And another subscriber at Netflix doesn’t require another employee. On it goes.

But FANG companies got complacent over the past decade. They tacked on more and more expensive labor, which has depressed profits.

This is the big secret in Silicon Valley: Many, if not all, of the biggest tech companies can generate the same revenue with a significantly smaller headcount.

We’re already seeing changes at many of these tech companies accelerating. The labor count is coming down, and that’s a great signal for investors like you and me. It means earnings will rise once costs are slashed. In turn, that means higher stock prices.

Now, first up to reduce costs was Meta. It announced a layoff of over 10,000 people, or 13% of its workforce. The stock popped over 5% on the news.

Since taking the company private, Elon Musk has gutted the employee base. And guess what? The site is still fully functioning. Sure, there are likely plenty of hiccups on the backend that you and I don’t see. But big picture, the site is still functioning—even after laying off over 50% of the workforce.

Amazon followed right behind. It has announced a 10,000-person reduction starting in 2023.

And there are others outside the FANG universe that are announcing layoffs:

But there’s one name absent from this mix. And I’m buying it before reality sets in.

My Money Is on Google

Google, or Alphabet (GOOGL), will be the next FANG to cut costs via labor reduction.

That’s an incredible growth rate, especially for a company that size. However, along with revenue growth, Alphabet has seen extraordinary labor growth.

That’s a massive increase. Are all these people really necessary?

Billionaire investor Chris Hohn manages TCI Fund Management, a multibillion-dollar hedge fund based in the UK. He’s been a large Alphabet shareholder for many years.

Last week, he went public with his stance on Google’s massive increase in headcount. In his letter to the company, he asked it to exhibit cost discipline like its peers.

I couldn’t agree more. And with a $7 billion stake in the company, my guess is that Alphabet’s management will listen to him.

All that to say, it looks like Google could be a buy here based on the potential for major layoffs and discipline, leading to higher returns and higher earnings.

The market doesn’t seem to be pricing in this potential outcome for Alphabet. That is, a rationalization of its overhead costs—specifically, labor.

Alphabet trades at around 20 times next year’s earnings per share. The earnings are dramatically depressed by its “Other Bets” group, which includes loss-making Waymo. This low-earnings number also includes its bloated cost structure.

In the event Alphabet cleans this up, profits should soar. And with that, so should the stock.

I’m buying Alphabet (GOOGL) here before the market recognizes that cost cuts are coming. And I’m betting they will.