There’s a lot of chatter out there about recession…

As you can see below, search data for “Are we in a recession?” is up big this year—on July 24, search interest spiked to 100, or the value used to represent peak popularity. 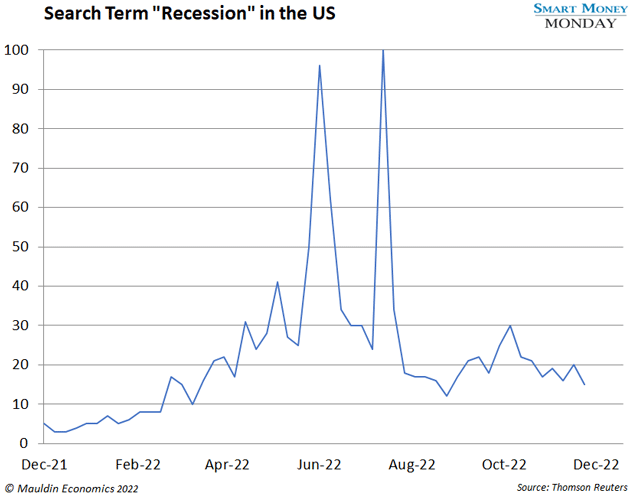 Clearly, recession is on a lot of people’s minds.

So, what does this mean for stocks? Well, the thought process often goes: “If we’re in a recession, I’m definitely not buying!”

But this approach is ill-advised. When we’re in a recession—officially—avoiding stocks is exactly the wrong thing to do.

Just look at the data…

We’ve had three official recessions in the past 20 years, according to the National Bureau of Economic Research, or NBER:

The problem with this neat-and-tidy label of beginning and end is that it’s backward-looking.


The NBER didn’t tell us in December 2007 that we were in a recession. Same is true for both the dot-com bust and COVID crash.

Instead, the NBER told us well after the fact.

When a recession is officially announced, something counterintuitive happens.

Looking specifically at the global financial crisis, the NBER told us in December 2008 that December 2007 was the peak in economic activity.

So, a full year later, it identified that the US was in a recession.

Nope. Exactly the opposite... 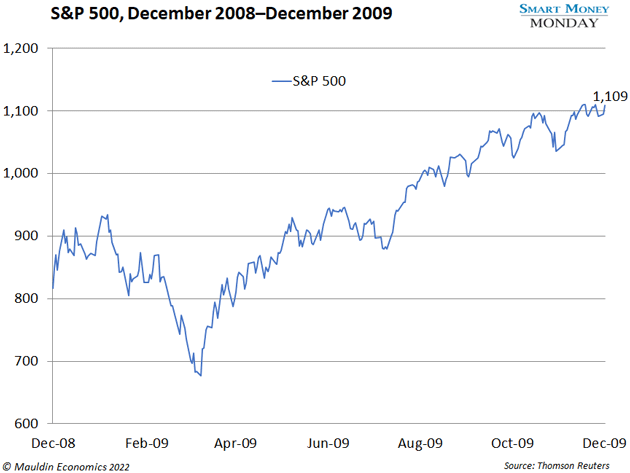 Similar stories played out for the 2001 and 2020 recessions.

So, it begs the question…

How Should We Position Ourselves Now?

The NBER hasn’t formally announced a peak in economic activity, but it may soon.

One of its criteria is two consecutive quarters of negative GDP growth. So far this year, we’ve had that.

However, that’s not the NBER’s only criteria. There are other factors that play into its decision to formally announce it.

Regardless, I think it’s all distractive noise.

The recession discussion leads me to the same advice I constantly repeat in Smart Money Monday.

Plenty of stocks are on sale. That’s certainly the case with the pond I fish in, the S&P 600, which is a basket of profitable small-cap companies.

It’s cheap relative to history. And it’s cheap compared to the larger-cap S&P 500, which trades for 17.2 times forward earnings per share.

But here’s the catch: Would you take a guaranteed 4.3% versus 7.3% in stocks? I wouldn’t. The government bond yield never grows. And it only “lasts” for two years.

Companies, and especially those in the S&P 600, have embedded growth. They have good futures with strong upside.

The concerns around recession just aren’t that important to me. If anything, the formal declaration of a recession means stocks are closer to a bottom than a top.

So, formal announcement or not, I’m sticking to my knitting: buying quality companies with insider alignment and good future growth prospects.