It’s not a good sign for your health if your blood pressure drops too low. It can cause dizziness and fainting and, in severe cases, can even be life-threatening.

Similarly, the economy is probably sick when its circulatory system slows down. You don’t need a blood pressure gauge to know it, either. Just count how many trucks you see on the highway.

With freight traffic dropping, the economy could soon get dizzy… and we’ll all feel it then. 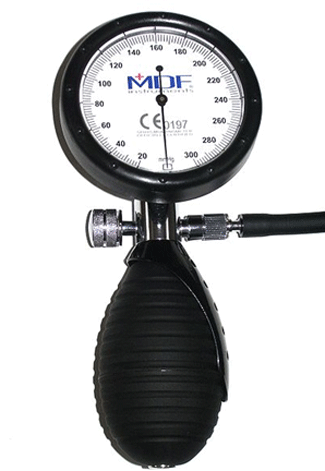 Under normal conditions, busy highways and seaports indicate a growing economy. Businesses are producing more stuff that is finding its way to consumers.

That was happening, albeit slower than in past cycles, since we emerged from the Great Recession in 2009.

Donald Trump won the 2016 election in part because people feared the growth was slowing. He responded with a giant corporate tax cut, which passed Congress in December 2017. It was supposed to re-stimulate the economy.

I said at the time any stimulus would be short lived and might actually lead to a recession. That’s still what I think, but it did help a little. The economy picked up in 2018.

But something else was happening: a brewing trade war.

It got worse from there, but the point is that anyone who was paying attention knew by mid-2018 that American buyers were going to pay more for imported goods.

US businesses responded by rushing to import as much as possible before tariffs (i.e., taxes)  rose even higher. Hence the Overheated Highways I wrote about in May.

Note, this wasn’t new demand. It was the same goods in the same amounts companies would have bought later on. They just bought them sooner in order to avoid tariffs.

When businesses moved up their import purchases, it meant they would import less in the future.

Now the future is here. Warehouses are full, and cargo traffic is slowing. Here are a few telltale headlines, just from this month.

That last story is particularly disturbing because it shows the same pattern unfolding in Asia and Europe as well as North America.

Lower bookings have made container spot rates from Asia to North Europe drop 36% this year. Reducing mining output in Brazil is making some companies send older ships to scrapyards.

The March NFIB Small Business Optimism Index showed a drop in the number of business owners who viewed inventories as too low, as well as reduced expansion plans. That may explain some of this decline. 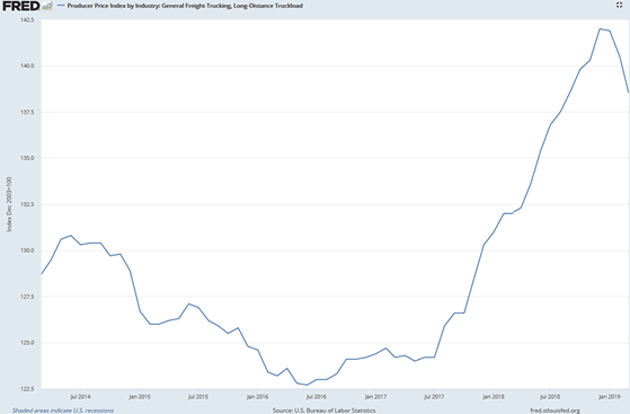 You can see trucking costs climbed like crazy from mid-2017 through the end of 2018. Now they’re reversing downward. The last time that happened was late 2014, when oil prices crashed. The US had a kind of mini-recession over the next year.

The next time may not be so “mini.”

The editors, who weren’t too bothered by the first three declines, said this in their latest report:

As we try to navigate the ebb and flow of the economy, we don’t pretend to have any ‘secret sauce’ or incredibly complex models that have exhaustively analyzed every data point available. Instead, we place our trust in the simple notion that the movement of tangible goods is the heartbeat of the economy, and that tracking the volume and velocity of those goods has proven to be one of the most reliable methods of predicting change because of the adequate amount of forewarning that exists…

Beyond our concern that the Cass Freight Shipments Index has been negative on a YoY basis for the fourth month in a row,

• We are concerned about the severe declines in international airfreight volumes (especially in Asia) and the recent swoon in railroad volumes in auto and building materials;

• We are reassured by the sequential increase in the Cass Freight Shipments Index (up 2.0%) and the volumes in U.S. domestic trucking (especially in truckload dry van);

• We are closely watching the volumes of chemicals and other shipments via railroad, as they have lost momentum in recent weeks and may give us the first evidence of the global slowdown spreading to the U.S.

Bottom line, the data in coming weeks will indicate whether this is merely a pause in the rate of economic expansion or the beginning of an economic contraction. If a contraction occurs, then the Cass Shipments Index will have been one of the first early indicators once again.

I have said before that we’ve reached Peak Globalization and the flow of physical goods will lose importance in the future. But for now, it’s still critical. The Cass data ought to concern everyone.

If cargo movement really is the “heartbeat of the economy,” like Cass says, the economy should probably consult a cardiologist. This problem may get worse before it gets better.

And the broken clock speaks.

I wish I had bought more biotime! Great stock idea John. Thanks.