According to the more cynical pundits, government programs usually achieve the opposite of their intended goal. And sometimes they do.

For example, Richard Nixon’s “War on Drugs” is still in progress, but the drugs are definitely winning.

Some government programs, however, are more effective. Firefighters are doing a pretty good job extinguishing fires. The US Coast Guard saves lives every day. Public school teachers educate students who would rather be elsewhere.

And then there’s our increasingly dysfunctional Congress. Where to begin?

I’ve written recently how Congress’s new tax plan misses a chance to boost economic growth. Now I think it may be even worse. Instead of merely failing to stimulate growth, the tax changes could actually launch a recession. I’ll tell you why in a moment.

But first, a quick reminder: our Mauldin Economics VIP program is open to new members until December 13. VIP members get all our premium investment services, including my own Yield Shark and Macro Growth & Income Alert, for one low price. I suspect they’ll be even more useful if we go into recession, so click here to learn more. 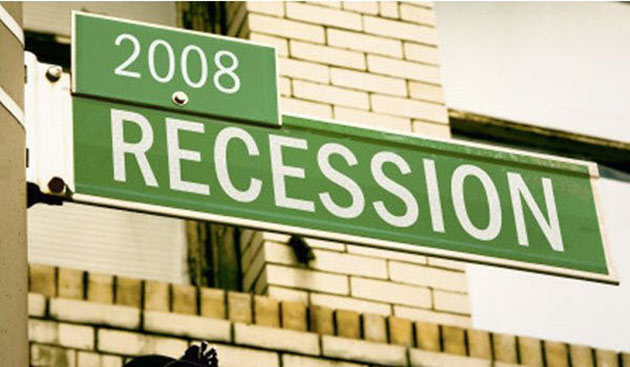 I explained two weeks ago why tax cuts won’t stimulate the economy as much as Republican lawmakers think. Most CEOs say they will use any tax savings for stock buybacks or dividends, not new hiring or expansion.

Since then, the Joint Committee on Taxation, Congress’s nonpartisan scorekeeper, found the Senate tax bill would spur only 0.8% of economic growth, split over 10 years, and add a net $1 trillion to the national debt.

But let’s set aside debt for now. What if, instead of little or no growth, this tax bill sets off an outright contraction? 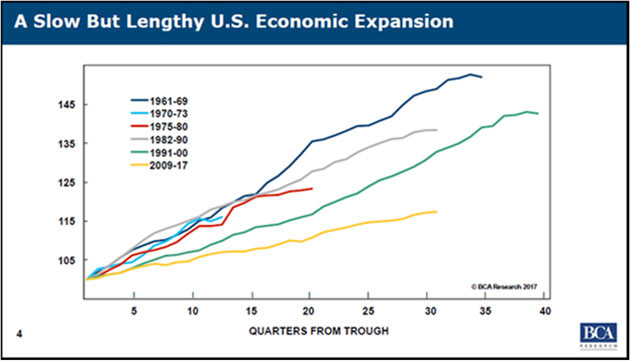 Last week, the Commerce Department revised its third-quarter inflation-adjusted GDP estimate to a 3.3% annualized pace. While that was good news, it also marked something ominous.

In addition to actual gross domestic product, economists track “Potential GDP.” That’s how fast the economy is capable of growing, considering the number of available workers, productivity, and other factors.

If subsequent data confirms last quarter’s 3.3% growth, it will mark the first time since 2007 the US economy achieved “maximum sustainable output.” 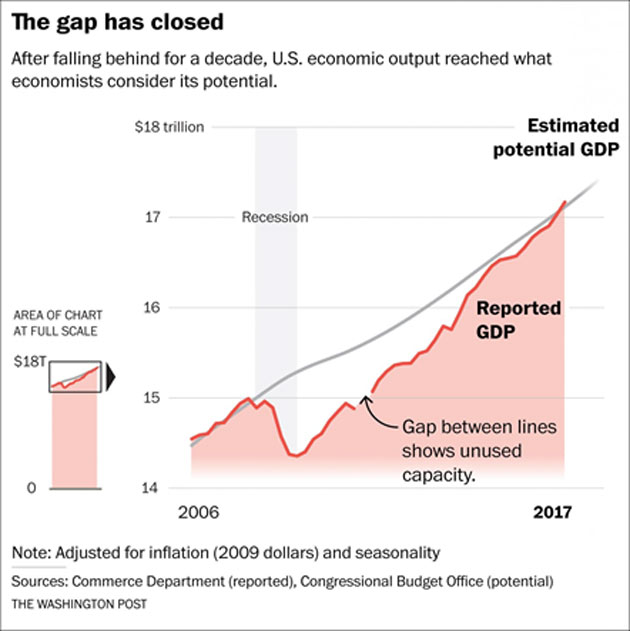 The gap between the gray line (potential GDP) and the red line (actual GDP) represents unused capacity. You can see we had a lot of it at the recession’s 2009 depth. The gap slowly shrank since then. Now it’s closed. 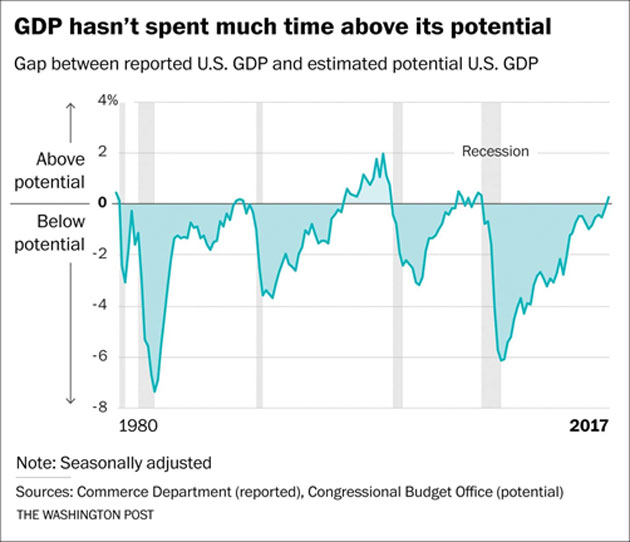 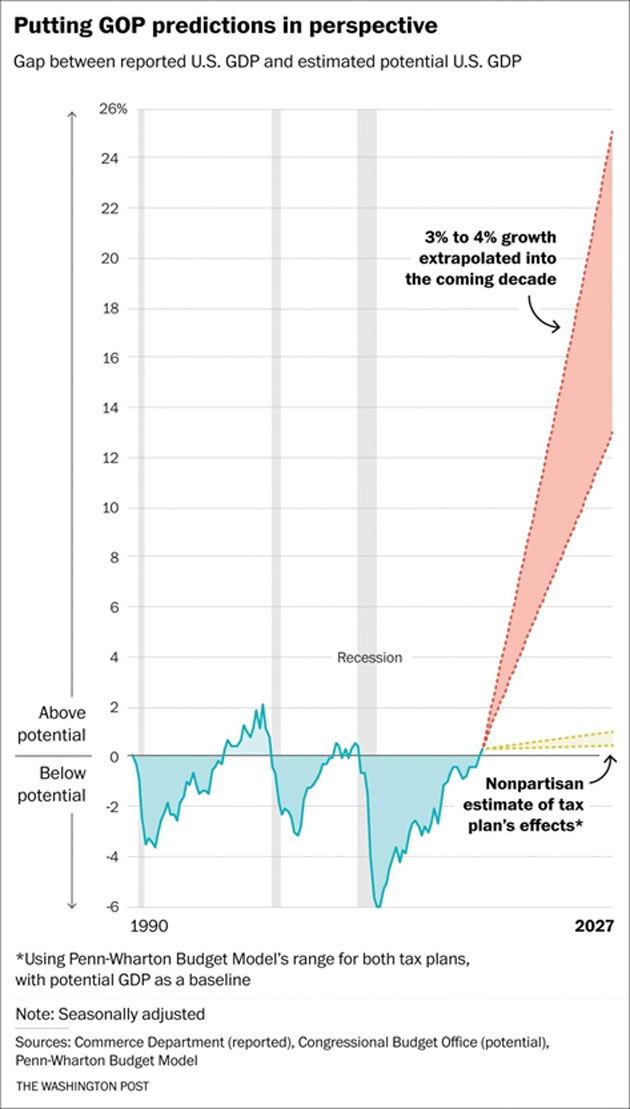 That’s not impossible: a major technology breakthrough might do it, say, a cure for cancer that frees up more workers, or wearable supercomputers to make workers more productive.

But just as likely, a recession, natural disaster, war, or other shock could sharply reduce GDP. The projections above don’t account for that possibility.

Now consider what else is happening.

The Federal Reserve is in tightening mode, both raising short-term interest rates and reducing its massive balance sheet assets. Fed officials think the economy is close to full employment, and they want to control inflation pressure before it gets out of hand.

If this tax cut finally passes—and I’m still dubious that it will—I don’t think it will create anything like 3–4% GDP growth. I think it will do the opposite, as the US Treasury borrows hundreds of billions more dollars to cover deficit spending. That will drive rates higher; not good for real estate or consumer spending.

Much like the War on Drugs gave us more drugs, the “War on Slow Growth” might give us even slower growth. 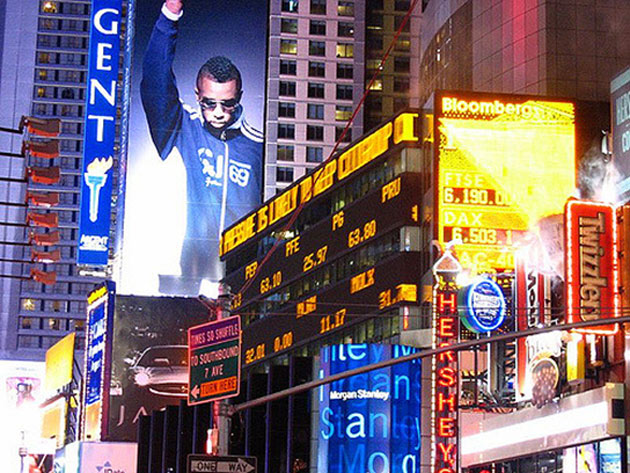 One thing I’m positive won’t happen is another 10 years of uninterrupted 3% or 4% real GDP growth, as politicians so glibly promise. That’s pure fantasy.

Gravity still applies, no matter how many people wish it didn’t. We may get a demonstration soon.

Hal3 home, I am not the expert you are looking for. You are looking for one to explain the distinction of duration and that of rate of growth as correlates to recession onsets. My two cents for an answer is as intuitive as saying it is a crap game. Take “duration.” The longer duration occurs, the more exposed one is to recession while enjoying economic expansion. All the game changers are out there and no one knows the “when” that any of them individually or collectively will significantly, negatively impact Goldilocks. Take “rate of expansion,” once again intuitive. The rate itself is affected by numerous variables. One can make charts as he did for each significant expansion, but each has its own fingerprint made by uniquely different numbers and extent of variables. With all this said, yes, certainly both duration and rate of expansion can have variables different from and similar to each other.

In the aggregate, a number of contributors to Mauldin’s readership and his own rational (which echoes aggregate) are on similar strokes to what I label for them a probability of “when.” You have duration variables becoming more evident, although they were sufficiently enumerated chiefly from the inception of Trump presidency (but some earlier). All have stayed away from the curse or heroics of saying when—or even a window for—a recession. I DO know the well repeated and explained variables that will most likely be the offenders becoming the stick to be placed in the spoke of the moving wheel. My conclusion when considering the imminence of them becoming the stick, and especially collectively, will be easily by mid-2019. If you go out 6 years from now….Katie, bar the door. Both the (1) Federal debt service and underfunded Social Security (that can be tricked but not popular) and (2) the state, municipal, and corporate underfunded pension pay-out obligations have the potential of one big whale dung drop taking the quality of life to a significantly low level.  Add that to a scenario wherein the economy as a stand alone entity could already be weak.

Your explanations appear to be very sound and make much more sense than what the politicians were saying during the debate on the tax bill.

I’ve seen the chart on economic expansions many times in the recent past, and every reference to the chart points out the duration of our current expansion and talks about how we must be coming to an end because the duration is getting so long compared to other historical expansions.  Never have I heard discussed the fact that the current expansion is tied for the lowest total expansion since trough, with all but one other expansion seeing much greater aggregate growth before recession.  By this measure, we could see another 8-10 years before a recession.  I don’t actually expect that type of duration, but I have long held the belief that part of the reason for this expansion’s longevity is the fact that it has taken the tortoise rather than the hare approach to growth.  I would enjoy hearing an expert discussion on why duration alone, rather than total expansion (or a combination of both), tends to be the focus when comparing with prior expansions.

Not sure the commentary fully supports the title. Seems like the main point is that we are due for a recession, and ANYTHING might trigger it. Also, I don’t see how the “bubble” in cryptos has anything to do with either tax reform or recession risk…...

I did a calculation last night looking for a possible alternative to the GOP tax plan to stimulate the economy.  It’s pretty simple so it probably wont happen.  Assuming one base case that the deficit would grow by $1.5 trillion over the next decade, and the fact there are 323 million US citizens, that translates into $4.64 Million over 10 years each.  Would it be better to spread the wealth in this extreme scenario or give more money to people who are already wealth?

Bitcoin Will Never Be Money