From a purely geographic viewpoint, what makes South America stand out as a distinct region is that the continent resembles a large island.

Massive oceans physically separate the continent from other regions in the world by great distances. Mexico, Central America, and the Caribbean create a physical separation between South America and the world’s largest global power, the United States.

Also, the continent is split by the Amazon rainforest and Andes Mountains to form two distinct “islands.” This partition has influenced the development of warfare, trade, and regional leadership in South America. 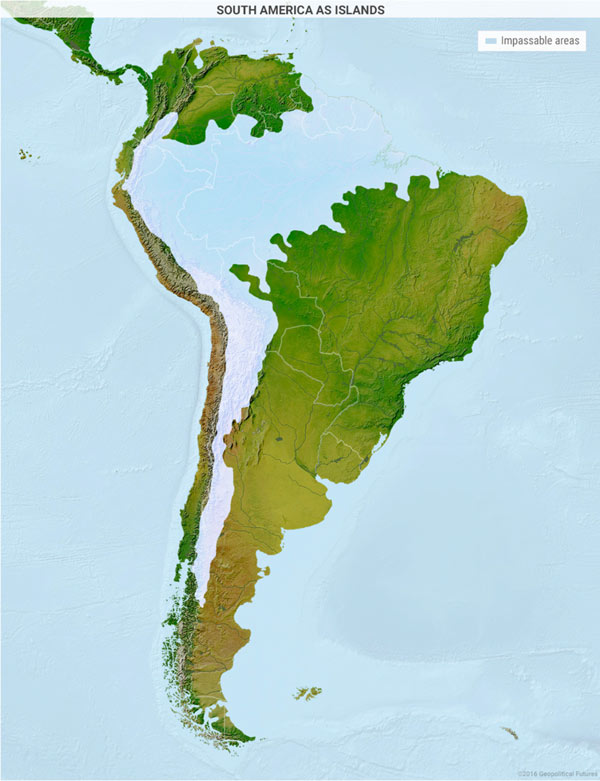 This island feature is one of three unique geographic features that has stopped modern warfare between nation-states in the region.

The second unique feature is South America’s location in both the Western and Southern hemispheres, which reduces its exposure to major global conflicts. The continent is physically isolated from Eurasia, where many of the world’s deadliest wars have been waged. For this reason, South America has avoided being drawn into these conflicts.

The third unique characteristic is that geographic barriers—including the Amazon rainforest, the Andes Mountains, the Atacama Desert, the Pantanal wetland, and the Gran Chaco—coincide with national borders, thereby significantly reducing the possibility of conflict.

South America’s unique geography has highly affected its economy, too.

Its geographic isolation contributed to reliance on extra-regional exports. Challenging terrain made maritime trade and the development of ports essential for South American nations.

Also, due to European colonization, these ports played an important role in the region’s national economies.

Colonial powers wanted raw material exports promptly shipped to Europe. To this day, many countries in South America depend heavily on the export of raw materials via ports for revenue (see the map of South America below). 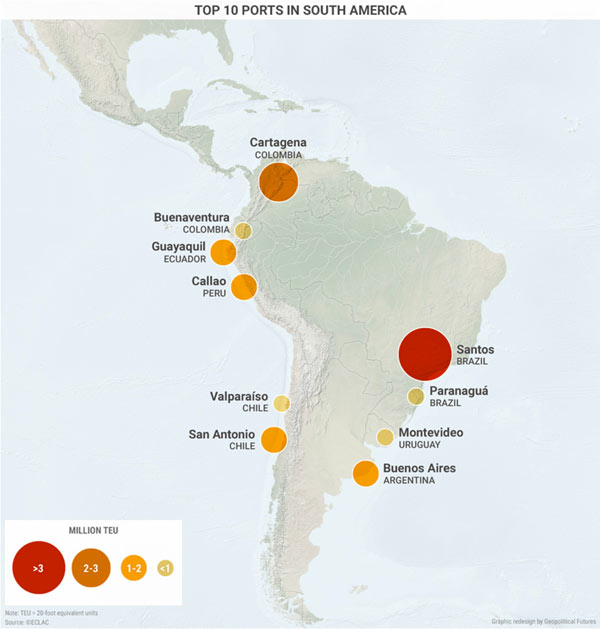 Why South America Doesn’t Have a Major Power

The combination of colonization and geography also explains why the continent has no clear regional leader.

Brazil is often regarded as the emerging leader for South America. That’s mostly due to its massive size in terms of land, population, natural resources, and economy. Argentina, also rich in natural resources and land, is Brazil’s historic geopolitical rival and serves as a counterweight to Brazilian influence in the region. This has its roots in the fact that Brazil was colonized by the Portuguese and Argentina by the Spanish. 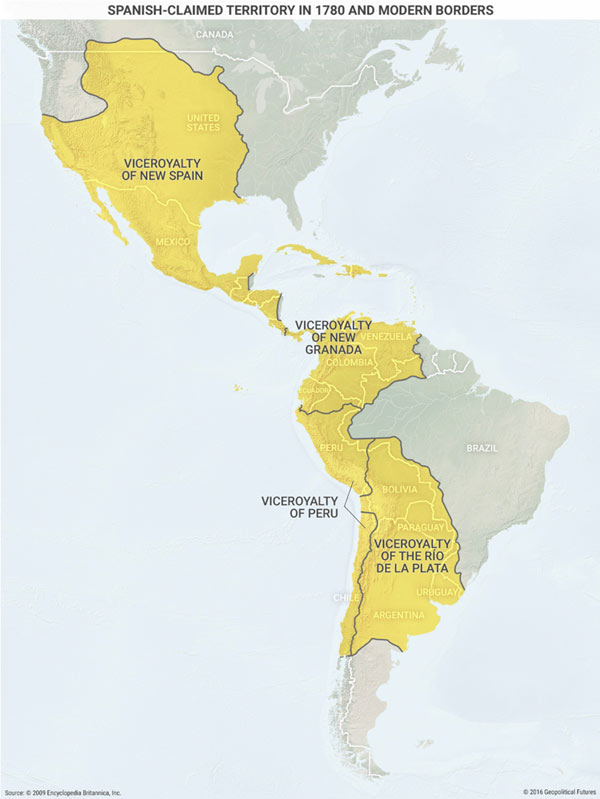 The Amazon and Pantanal buffered most of Brazil from the Spanish viceroys, allowing Brazil to build its statehood under different terms than the rest of the region. During the initial period of colonization, control of the borderlands between Brazil and Argentina changed hands multiple times.

South America has struggled to produce a regional leader, in part because no single country has all the characteristics necessary to assume such a role, even though some countries have large populations, land, and natural resource deposits.

The Andes and Amazon physically divide the continent, making it nearly impossible to have access to both the Atlantic and Pacific oceans. With the exception of Colombia, no South American country has access to both.

For these reasons, no South American country has fully been able to assume the role of regional leader for an extended period in modern times.

How Dictatorships Affected the Continent

The region’s development has also been heavily influenced by the strong presence of military dictatorships and social revolutions in the 20th century.

Almost every South American country had a military dictatorship in the 20th century. Many of these did not end until the late 20th century. 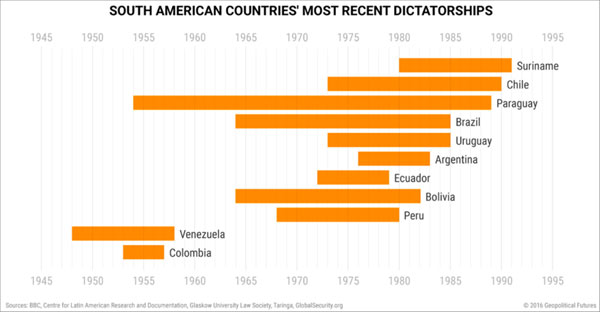 Because of this, the current governments are very young and relatively inexperienced democracies. People in the region are still “drawing up” their respective social contracts, for which there is no one-size-fits-all template.

Societies are also struggling to find a balance between personal and civic responsibilities, which has led to high expectations for state services, many of which have become a burden on public budgets.

Even today, many countries in the region find themselves needing to cut back on public spending, as public revenue falls along with commodity prices, and must deal with resulting social tensions.

South America Is Trying to Integrate into the International System

South America’s geographic separation from the world also played a strong role in its relations with other countries.

South America is physically far removed from major trade routes in the Northern Hemisphere and isolated from Europe and Asia. In an attempt to gain more influence, South American countries have consciously sought ways to insert themselves more in the international system.

This strategy is a constant in the foreign policies of the countries in this region. Regional integration groups—of which there are many—serve as instruments for these governments to gain more clout that they can use in international affairs.

Larger countries also try to develop an area of expertise through which they can insert themselves into international issues. For example, Argentina with nuclear energy, Peru with climate change, Chile with mining, and Brazil with deep-water oil drilling.

Such expertise obviously has useful domestic applications, but also provides an outlet for these countries to further integrate into the international system.