As I wrote a few weeks back, our inflation nightmare is nearly over. My prediction remains the same: Inflation will be close to flat come March.

The inflation reading for October, released on Thursday, came in better than Wall Street expected—at 7.7%.

Markets ripped higher on the news… The S&P 500 finished Thursday up 5.5%. The tech-heavy Nasdaq surged nearly 8.4% over two days. Good for its best two days since December 2008.

It’s official: Inflation is cooling, and the Fed’s interest rate hikes are working as intended. In short, lower inflation means a more hostile Fed will soon be off the table.

Now, despite the big rip last week, plenty of stocks are still cheap. And now’s the time to take advantage.

Based on what I’m seeing, there are three areas of the market that I believe have the greatest opportunity to deliver slam-dunk gains over the next few years.

They have a strong likelihood of looking like cigarette companies over the next decade— meaning they will generate outstanding returns for investors despite being loathed by a large percentage of the population.

For example, consider tobacco company Altria Group (MO), an all-time great stock. Investors who bought Altria shares in 2000 went on to see peak gains of 13,658% (adjusted for dividends and spinoffs).

It raised prices despite declining sales volume yet paid out tremendous cash to shareholders in the form of dividends and buybacks.

That’s exactly what I expect from energy companies. They will drill the amount required to replace existing production and will likely behave extremely rationally. Meaning no more speculative drilling and assumptions of crazy-high oil prices.

The best part: This scenario still isn’t being priced into energy stocks. They’re priced as if the end of fossil fuels is right around the corner.

Look at Chevron (CVX). It still trades for less than 12 times 2023 analyst estimates for earnings per share.

Then there’s BP plc (BP). It trades for a low single-digit earnings per share.

Energy has already been a strong performer this year, with the Energy Select Sector SPDR Fund (XLE) up 68%. It still has a lot of room to run. 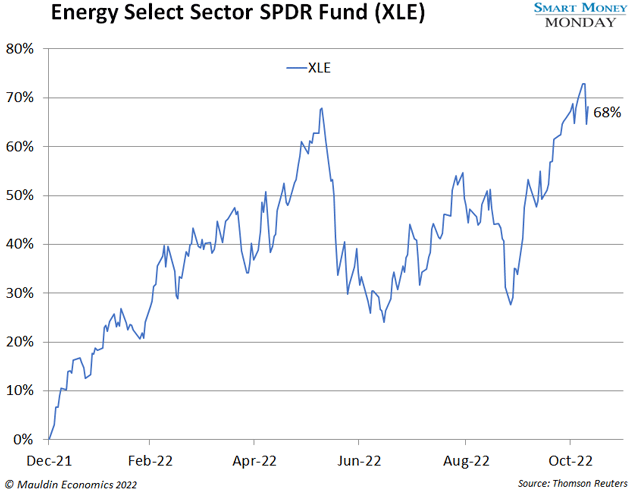 As I said, our inflation nightmare is cooling, and in a few more months, I still believe it will be over.

That doesn’t mean the Fed is going to return to cutting rates, though. Instead, I suspect interest rates will stay elevated. We’re not going back to 0% interest rates—at least not anytime soon.

For banks, this is good news. Loans are priced off the risk-free rate, the rate set by the government.

On the cost side of things, banks historically must pay depositors a rate of interest. Again, that’s tied to where government interest rates are.

Despite substantial rate hikes, banks are not seeing their cost of deposits rise. They’re flush with deposits right now.

This setup of higher interest income and flat cost of funds means more profits for banks. And I don’t think the market appreciates this just yet.

There’s room for upside at the banks, and I think they’ll be a key part of the next big “theme” that drives returns in the coming years.

Members of my High Conviction Investor service are capitalizing on quality, undervalued small-cap stocks. We own companies that trade for 10 times earnings or free cash flow yet are growing double digits. To learn more, just click here.

In the meantime, and to set yourself up for slam-dunk returns, look at energy, banks, and small-cap value. Whether the inflation nightmare is over or not, I suspect these three areas will still produce solid investment gains in the years to come.