I recently learned a shocking statistic…

I didn’t believe it at first.

But sure enough, after looking into the data, it’s true.

Investors in the largest Chinese ETF have seen no positive return in 30 years.

The MSCI China Index was formed by index provider MSCI in 1995. The index includes back-tested data going back to 1992.

And since 1992, the total return for investors today is a whopping 0%. 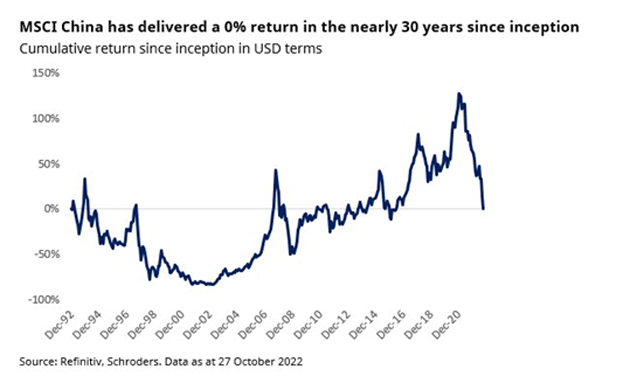 Zero percent. In 30 years! That’s insane, especially when you compare it to China’s economic growth as defined by gross domestic product (GDP).

Now, as I wrote last week, even the greatest business in the world will make for a poor investment if you overpay.

The same goes for themes. And the China theme is one of the greatest in a century: a massive population of people rising out of poverty into the middle class.

Yet many investors dramatically overpaid for exposure to it, resulting in poor returns.


The Other Problem with China

The China theme—massive GDP growth, a huge population, and industrialization of an economy—is a good one. But it also poses a serious risk that developed market investors are not used to…

I warned about this issue last year when I passed on Alibaba (BABA). At the time, the stock had fallen 50% and was trading around $120 per share.

My point with BABA was that you don’t own what you think you own. Meaning when you buy shares of BABA, you’re actually buying shares of a Cayman Islands company… not a company based in China.

BABA has continued to fall since then. It’s now down another 50% to $66 per share since I warned about it. 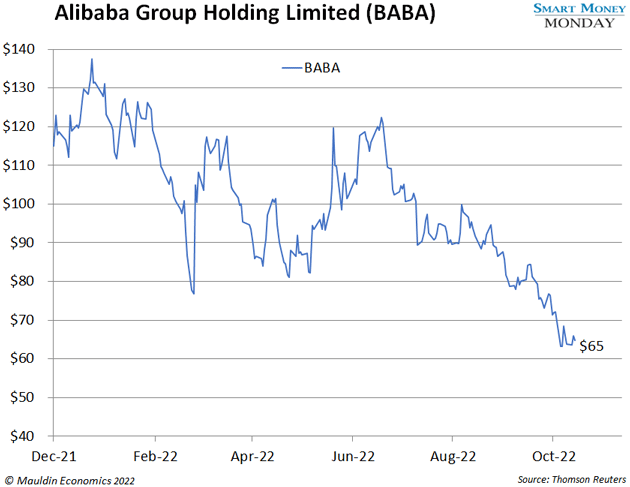 The problem hasn’t gone away, as no one really owns anything in China. If you think you do, the government can take it away at a moment’s notice.

But the demographic and development theme is still an interesting one that I’d rather play through another massive country: India.

I wrote about India last August, which you can revisit here.

India’s prime minister, Narendra Modi, has done all the right things to drive growth in India:

Fairfax is a Canadian insurance conglomerate run by Prem Watsa, the Warren Buffett of Canada.

Fairfax owns interesting assets in India. It also owns a large stake in Fairfax India Holdings (FFXDF), which is its own publicly listed company full of quality Indian companies.