Like “merger arbitrage.” It sounds complicated, but the setup is simple.

During that period, call it six months, shares of Company B should trade at or near the cash offer. After all, Company A has already told the market the price it’s willing to pay.

Enter the merger arbitrageurs, or “arbs.”

Let’s say Company A’s cash offer was $50 per share. So, if shares of Company B are trading at $48 or $49, we’re looking at a $1‒2 spread. That translates to a 2%‒4% return in the six months it takes for the deal to close. On an annualized basis, that pencils out to a 4%‒8% return. Nothing life-changing, but also, not bad for a low-risk trade.

For perspective, the S&P 500 returns 8% per year, on average. A merger arbitrage play can hand you something close to that. But you aren’t making any company-specific bets. You’re just betting on the deal closing.

If the deal falls apart, Company B’s stock price could collapse. And that 4%‒8% annualized return you expected could turn into a 20%+ loss in a flash.

Sportsman’s Warehouse shot up to $17.92 on the news. At that point, the spread was extremely tight. And market participants may have expected a competing bid to roll in (it never did).

Meanwhile, the deal dragged on. Eventually, the Federal Trade Commission labeled the merger “anticompetitive” and signaled that it wouldn’t approve the deal. So, after 12 months of shuffling papers, Great American Outdoors backed out.

When the deal collapsed, Sportsman’s Warehouse sank from $17 to $13. Four months later, the stock is trading under $11. 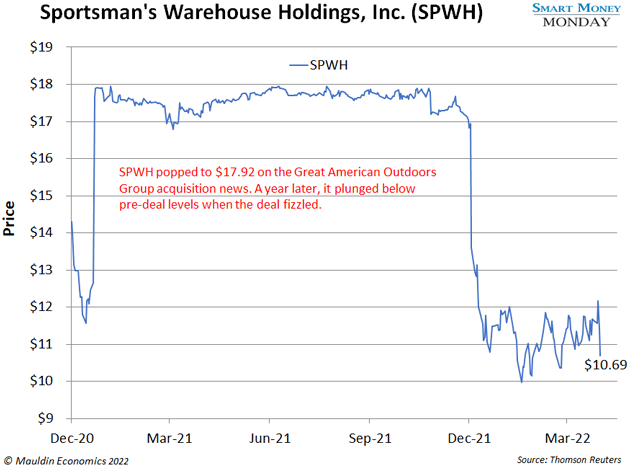 This is not uncommon. One in five merger and acquisition deals fall through, according to the New York Fed.

As I write, Activision is trading around $80. Meaning there’s a 16% spread between the acquisition price and the current price. That may look tempting to a novice investor. After all, Microsoft has a AAA credit rating, and it’s flush with cash. If anyone can close a deal, it should be Microsoft.

However, a spread that wide means the market expects the deal to crumble. In this case, they expect the government to block the deal over antitrust concerns. And that is quite possible. Last week, a group of four US senators pushed the Federal Trade Commission to scrutinize the deal more closely—not a good sign.

That’s why I’m staying out of this particular merger arb play.

First, instead of trying to capture the spread, look at the pro-forma company to see if there’s value. That was my thesis behind recommending AT&T (T) in November. The company is set to spin off Warner Media, which will merge with Discovery Communications (DISCA). AT&T will own 71% of the new company.

The deal should close in the next month or so. And I still like AT&T at current prices.

The other play I like: Own a fund that specializes in merger arbitrage.

My top choice is the Gabelli ABC Fund (GABCX), which has been around since 1993. The fund has outperformed its relative benchmark, the 3-month Treasury bill, by more than 3% since inception. The durations for its investments are extremely short, usually under a year. And the fund’s returns are effectively floating—as interest rates rise, the spread demanded by arbitrageurs should rise as well.

I don’t often recommend a fund (or a huge company like AT&T). But in this case, we’re not looking for an investment that could wildly outperform the market. We’re looking for alternatives for the bond portion of your portfolio. And the Gabelli ABC Fund is a compelling bond proxy.

I’m excited to join the rest of the Mauldin Economics team, along with investing powerhouses like Louis Gave, Grant Williams, and Lacy Hunt at the Strategic Investment Conference, May 2‒11, and on our PLUS-day on May 13. I hope you will join us for a crash course on the top investing strategies and biggest profit-making opportunities for the year ahead. Click here to preorder your SIC 2022 virtual pass at a steep discount.