My editor begged me not to write about this stock.

Well, sometimes a big, obvious stock pick is a lucrative one.

Take Apple (APPL) in 2018. It had already skyrocketed 1,000% since the iPhone debuted 11 years prior. And many analysts thought its best days were over—like Blackberry (BB) or Nokia (NOK) before it.

Yet one of my hedge fund buddies said he’d just put around 20% of his fund into Apple. Billionaire Warren Buffett was loading up on it, too. By the end of 2018, Berkshire Hathaway owned around 1 billion shares.

These guys could buy anything. But they bought a big, obvious stock. And it paid off. Apple has soared over 200% since 2018. 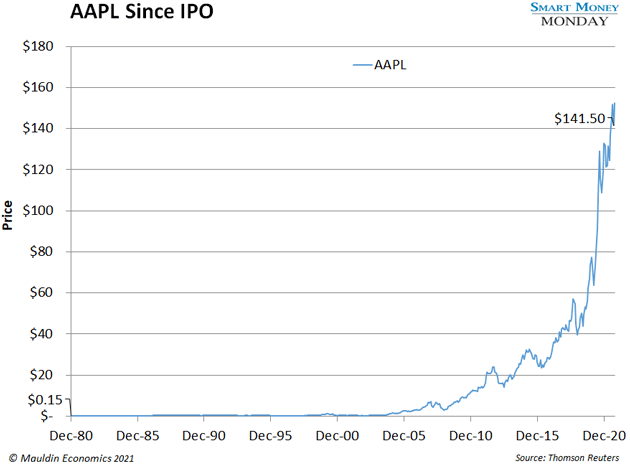 My goal here at Smart Money Monday is to help you make money. Every week, I share one great investment idea.

That’s often a small-cap stock—a company that isn’t a household name yet. But today, I’m going to show you why I’m investing in another big, obvious stock like Apple… one that could easily double in the next few years.

I’m sure you know the company—telecom giant AT&T (T). 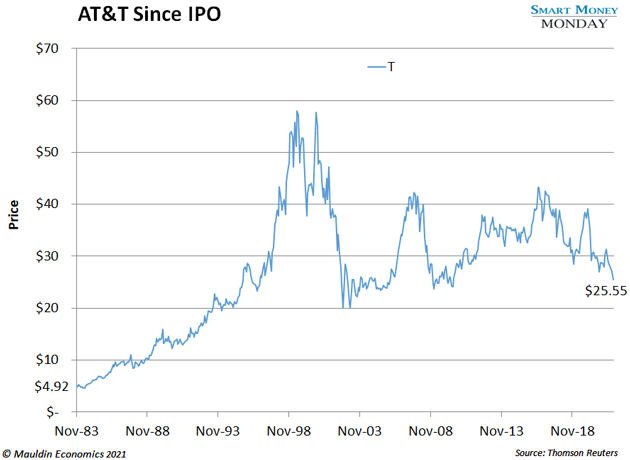 AT&T is dirt cheap because of a series of management mistakes. The old CEO overpaid when the company bought DirectTV in 2015. He overpaid when it bought Time Warner in 2018.

Basically, he set shareholders’ cash on fire. He also borrowed a lot of money. Then AT&T had to cut its dividend to pay for those mistakes.

If there is one thing you don’t want to do with a mega-cap company like AT&T, it’s cut the dividend. This is a blue-chip, widows & orphans stock. People buy it for safety and security. But the former CEO and his management team did not take that responsibility seriously. And the stock suffered accordingly.

The old CEO left last year. And the new CEO, John Stankey, is turning things around.

Stankey has already sold off a lot of fringe assets, like its Puerto Rican telecom business and the video streaming service Crunchyroll. He’s refocusing the company on its bread and butter: US wireless and fiber services. AT&T has 45% of all US wireless subscriptions as of the first quarter of this year.

As a final step in the cleanup, AT&T is spinning off WarnerMedia (one of those companies the old CEO overpaid for). WarnerMedia will merge with Discovery Communications (DISCA), and AT&T shareholders will own 71% of the new company. The deal will likely be finalized next year.

Few investors are looking at its potential just a few months down the road when Stankey has finished cleaning up the last CEO’s mess.

After the WarnerMedia spin-off, AT&T will be a focused telecom giant with only two real competitors: Verizon and T-Mobile.

Stankey bought $1 million worth of AT&T stock in May. As I mentioned last week, insiders buy shares for one reason: they expect the price to go up. No one knows the company better than Stankey. And he’s putting a million bucks of his own money on the line. This is a great sign.

Buying shares now gets you a juicy 6% dividend. And thanks to Stankey’s big cleanup, the company will pay those dividends out of profits (and use the extra cash to pay down debt).

This is a rare chance to buy a blue-chip stock at bargain prices. It’s big and obvious, but my research shows it could easily double in the next few years. I own shares of AT&T, and you should consider buying some, too.

We’ve covered a lot of ground since Smart Money Monday launched last summer. Everything from “Chipotle moments” to luxury automakers to Canada’s answer to Berkshire Hathaway.

Have you bought any of the stocks I’ve recommended? What are you most eager to hear more about?

I enjoy reading all of your questions and comments. Please drop me a note about AT&T or anything else you’d like to read more about at subscribers@mauldineconomics.com.