Last December, we added Coupang (CPNG), the Amazon of South Korea, to our watchlist.

As you might recall, Coupang’s 2021 IPO was a bust. After going public at $50 last March, shares tumbled, closing the year down nearly 50%. And they kept tumbling from there. Shares are now trading below $20. 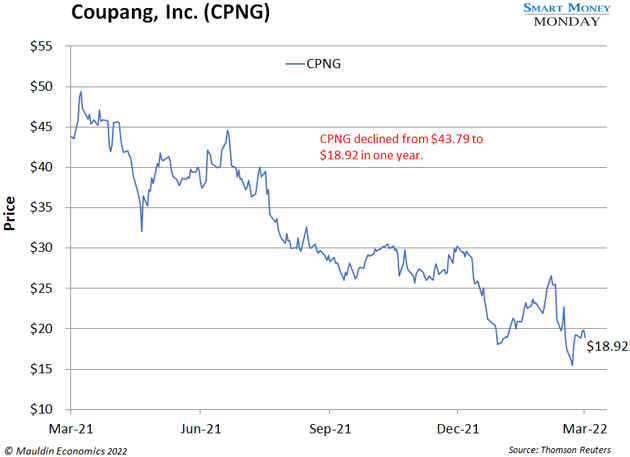 However, it’s had a little trouble with its largest shareholder, the controversial Japanese conglomerate SoftBank, which is run by billionaire investor/tech entrepreneur Masayoshi Son.

SoftBank has a lot of debt. It also owns a large chunk of Alibaba (BABA). And shares of Alibaba have sunk 50% in the last 12 months.

Unfortunately, this caused Coupang collateral damage. SoftBank owns 26% of the company, or 461 million shares. But it dumped 57 million Coupang shares last September and another 50 million shares a few weeks ago.

That said, the stock is quite cheap here. And its ecommerce segment is expected to show profitability on an EBITDA basis in Q4 2022, which is promising. Long-term, topline revenue should continue to grow and get to a 10% EBITDA margin.

I’ve taken a small starter position in Coupang. Now is a good time for you to do the same.

As I write WTI crude is hanging out around $110, and we’re all feeling the pain at the gas pump. 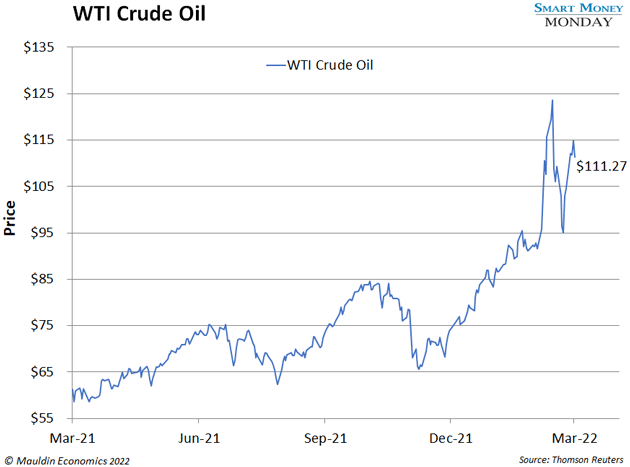 That is a great question. There’s a narrative floating around that oil producers and gas refiners are price gouging. Meaning they’re keeping prices artificially high through nefarious methods.

The reality is different. Prices are high, and likely to remain high, because oil companies are returning cash to shareholders instead of investing in production.

The oil majors—BP (BP), Exxon Mobil (XOM), Chevron (CVX)—are returning tons of cash to shareholders. The smaller players like Pioneer Natural Resources (PXD) and Continental Resources (CLR) are doing the same. Pioneer returned over 100% of free cash flow to shareholders in the fourth quarter of 2021. And it has a $4 billion share repurchase plan in place. It’s the same story with Continental. It increased its quarterly dividend and continues to repurchase shares.

There isn’t any investor appetite for these companies to increase drilling. Layer on the ESG mandates at institutions and endowments, which expressly prohibit investing in oil and gas producers, and you see the issue.

I suspect this situation will reach a breaking point. The potential returns from drilling new wells will become so compelling that companies will increase production again. But don’t expect that to happen for at least another six months.

For now, I still like BP at current prices.

I received one question about the bank’s stated book value. Banks are valued in relation to their book value per share. Book value is a crude proxy for liquidation value. A bank that earns a strong return on equity usually trades at a premium to book value.

First Citizens’ financials, as of December 31, 2021, did not capture the current state of the company. When I first wrote about the bank in February, it hadn’t released the financials pro-forma for its acquisition of regional bank CIT Group. But my estimates were spot on.

On earnings, First Citizens expects to generate around $76 in earnings per share for 2023. So, at today’s price, it’s a very reasonable 9X forward earnings.

First Citizens’ historical financials are messy, but that’s why this opportunity exists. At $684, FCNCA is still a buy.

Cleveland-Cliffs is benefiting from a few different things. First, the Russia/Ukraine situation has pushed a lot of Russia’s steel production offline. Less supply and flat-to-growing steel demand mean higher prices. After dipping to around $1,000 per metric ton in early February, hot-rolled coil prices have risen above $1,500.

Cliffs isn’t directly exposed to spot prices, since many of its contracts are multi-year and fixed price. But rising spot prices still improve investor sentiment on steel stocks.

On the capital allocation front, Cliffs is paying down $607 million of its 9.875% notes. This fits into CEO Lourenco Goncalves’s strategy of paying down debt and returning cash to shareholders through buybacks and dividends.

Despite the monster run, Cleveland-Cliffs still trades at a single-digit multiple of 2022 earnings. If you own it, continue to hold on. I’m not selling a share.