Market veterans will tell you there are no shortcuts in investing.

But there’s one I use every single day.

Really, it’s just a simple strategy that can boost your returns by 6% or more a year. That might not sound like much. But when a $100K portfolio beats the market by 6% for a decade, it translates into an extra $154,000.

That could mean the difference between paying off your mortgage early or not… between sending your kids to college without incurring debt or not. And you don’t have to do much to get it.

We all know that Amazon (AMZN) and Tesla (TSLA) have handed major gains to shareholders. They’ve climbed 164% and 1,110%, respectively, in the last 5 years alone. Lesser-known companies like insurance broker Brown & Brown (BRO) or Raymond James Financial (RJF) have also outperformed, climbing 160% and 108% over the same period.

This is no coincidence. Stocks with strong insider ownership tend to do better than most. One study found that when insiders purchased shares of their own companies, those stocks outperformed the market by more than 6% annually.

That means tracking their buying activity and the size of their holdings. The more skin insiders have in the game, the more committed they are to bolstering their company’s long-term profits.

This makes sense. After all, no one washes a rental car. But when you own something, whether it’s a car, a house, or a billion-dollar company, you take better care of it.

That’s not always the case with hired guns who run public companies. It’s not that they don’t care. But they focus on short-term issues like, “What does next quarter look like?”

Meanwhile, an insider with a big stake will focus on the long term. He’ll ask himself, “How can I grow the value of my investment for myself, my family, and my investors?” Those are the guys we like to invest with.


It’s common for insiders, and founders in particular, to own large slices of these companies.

Albert Nahmad, the CEO and chairman of Watsco (WSO), is a great example. Watsco is the largest HVAC distributer in the US. After Nahmad took a controlling interest in the company in 1973, he grew annual revenue from $5 million to $5 billion.

I’ve shared some of these opportunities with you here in Smart Money Monday. Opportunities like steelmaker Cleveland-Cliffs (CLF), where CEO Lourenco Goncalves owns approximately 1% of the company. Goncalves is a big reason I like Cleveland-Cliffs. Under his leadership, it’s acquired a monopoly-like hold on US iron ore and flat-rolled steel production.

Late last year, Cleveland-Cliffs agreed to buy a leading scrap metal company for $775 million. It’s exactly the kind of smart deal I’d expect from an insider like Goncalves, who has a lot of skin in the game. I own shares of Cleveland-Cliffs, and it’s still at buy at current prices.

Rocket is one of the largest mortgage lenders in the country. It went public in 2020, and the share price has plummeted since.

However, the trouble didn’t stem from the company itself. 2020 and 2021 were record years for new and refinance mortgages. Rocket benefited. Now, things are normalizing, and the share price reflects that. 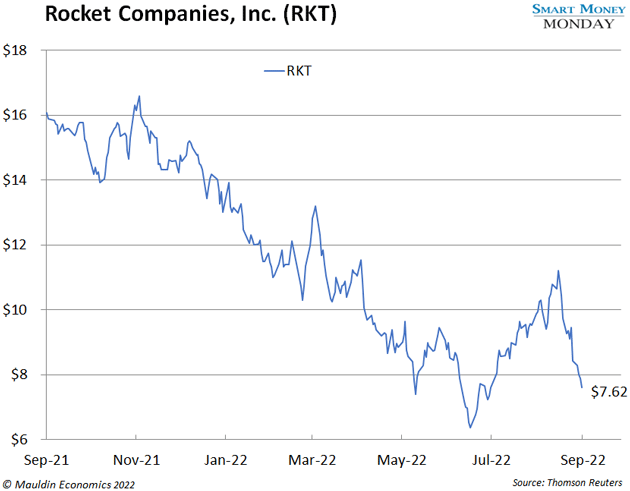 Rocket CEO Jay Farner thinks the stock is cheap, and he’s continuing to buy shares. He purchased another $600,000 block of Rocket stock just two weeks ago.

Insiders at Rocket, including Farner and founder Dan Gilbert, own nearly 94% of shares outstanding—practically the whole company. That is serious insider alignment.

Time will tell where the bottom is for mortgage originations. But even under conservative future estimates, Rocket is cheap. Other mortgage players won’t survive the downturn, allowing Rocket to continue to gain market share.

I’m still doing more due diligence on the company. So, I recommend adding it to your watchlist. I’ll let you know if and when it’s time to pull the trigger.