Editor’s Note: Good morning—we are kicking off another week with a profitable idea from Mauldin Senior Stock Analyst Thompson Clark.

If you’d like to catch up on Smart Money Monday, our new weekly advisory here at Mauldin Economics, click here.

My Favorite Commodity Stock… Ever

Someone who doesn’t hesitate to say things like “we are going to screw these guys so badly” and “there’s a sheriff in this business.”

Normally, you only hear Goncalves’ brash comments on his conference calls. I’ll admit they’re not for everyone.

I’m sharing them with you today because Goncalves is the best CEO you’ve probably never heard of. And he runs my all-time favorite commodity company.

Under his leadership as CEO, investors in Metals USA, a leading metal distributor, saw a 7X return in 2 years. Before that, he enjoyed decades of success at various international steel companies.

If you caught the last issue of Smart Money Monday, you know that following the dealmakers is a reliable path to profits.

Today, I’ll share how Goncalves, a leading operator and dealmaker in the metals industry, transformed a floundering company into the largest producer of iron ore and flat-rolled steel in North America.

The best part is, this company’s stock is ridiculously cheap right now, for reasons I’ll explain shortly. That gives us an opening to buy shares that could easily double in the next 6–12 months.

Skyscrapers. Battleships. Cars. They all require steel. And steel is made from iron ore.

For the past 175 years, most of the iron ore mined in the US has come from mines owned by Cleveland-Cliffs (CLF).

Cleveland-Cliffs is steeped in American history. It started with iron ore mining in Michigan in the 1840s. Eventually, it ventured into coal, oil, and uranium production.

But by 2014, the company had lost its footing. And it showed.

Take a look at this crazy chart: 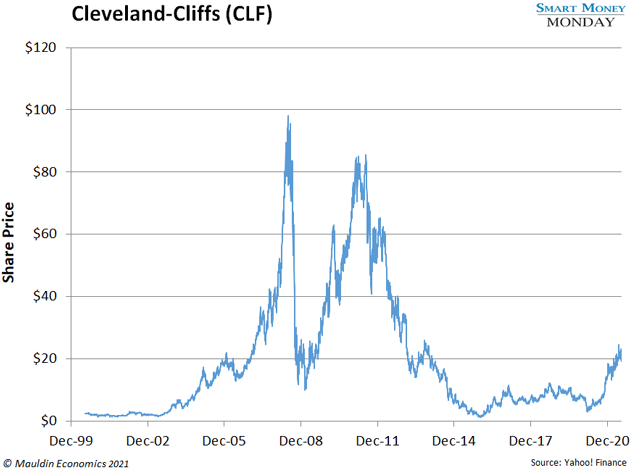 As you can see, shares plummeted from an all-time high of $98 in June 2008 to $12 in March 2009, thanks to the financial crisis and a broad correction in commodity stocks.

This time, the culprit was poor management. The old management team was investing money all over the world, chasing risky projects with poor return prospects.

Cleveland-Cliffs was a bit of a mess. Then Lourenco Goncalves came along…

He joined the company as CEO in 2014 and sold off its remaining coal operations, along with some extraneous international assets. And he refocused the company on domestic iron ore production.

Then he started buying up his biggest customers.

In March 2020, Cleveland-Cliffs purchased Ohio-based steelmaker AK Steel for $1.1 billion. A few months later, it bought the US arm of multinational steel manufacturer ArcelorMittal for $1.4 billion.

These two strategic deals turned Cleveland-Cliffs into one of the largest steel manufacturers in North America.

Today, Cleveland-Cliffs is a giant in two industries—iron ore and steel. It controls 60% of US iron ore production. And it produces more hot-rolled steel (pictured below) than any other North American company. 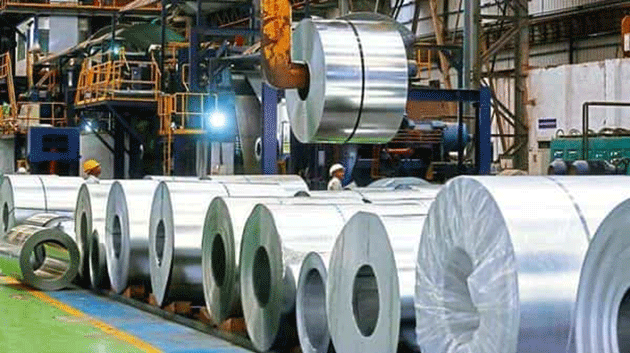 Hot-rolled steel is used to make everything from ships, to cars, to home appliances.
Source: livemint.com

Consolidating an industry like this is a dependable path to outsized profits. Cash is already flooding into Cliff’s bank account, as you’ll see shortly.

There’s a lot of pent-up demand for products made with steel like cars, solar panels, and industrial equipment. So, I expect prices to stay above $1,000 for the foreseeable future.

Rising steel prices have already helped push Cleveland-Cliffs’ stock up 46% this year. My research shows it has plenty of room to run.

They’re trading at 5X this year’s earnings, signaling that the company is undervalued.

Meanwhile, Cleveland-Cliffs is simply gushing cash. It expects to generate $1.4 billion in free cash flow for Q3 2021. That’s more than the company generated in the last 3 years combined… in just one quarter.

Cleveland-Cliffs is also on track to pay down a significant chunk of its $5 billion debt by the end of the year. It expects to have $0 net debt in 2022. That would be an incredible accomplishment.

2021 is shaping up to be a monster year for the company. EBITDA, a proxy for earnings, is set to grow 1,316%. That’s an amazing level of growth. It should drive the stock significantly higher.

This is a fantastic opportunity to own a high-growth company with a monopoly-like hold on US iron ore and flat-rolled steel production. The market just hasn’t caught on yet.

I own shares of Cleveland-Cliffs (CLF), and you should consider buying some, too.

Subscribers have sent in a lot of great questions over the past few weeks. From time to time, I’ll answer some of them here in the Monday Mailbag.

One subscriber asked for more background on my Vistra Corp. (VST) recommendation.

Q. Enjoying your new column here. I like the notion of finding solid dividend-paying companies that have suffered a big one-time hit to the share price.

So, how does a 27% decline at VST, which has recovered substantially since … turn into a remaining 70% upside, and over what estimated time period?

A. My 70% upside projection for Vistra Corp. (VST) is based on recent acquisitions of similar publicly traded utilities.

The most similar transaction was Calpine, which was acquired in 2017. The buyers paid around 7X EBITDA (a proxy for pre-tax cash flow).

If Vistra were acquired at a similar multiple—and we consider 2020 to be a more normal year for its EBITDA than 2021 (when the fluke storm happened)—the stock would be worth $33.

P.S. If you have questions about opportunities in the metals industry, please write to me at subscribers@mauldineconomics.com.