Shares of Berkshire have soared 600% since 2000, making a lot of people rich in the process. 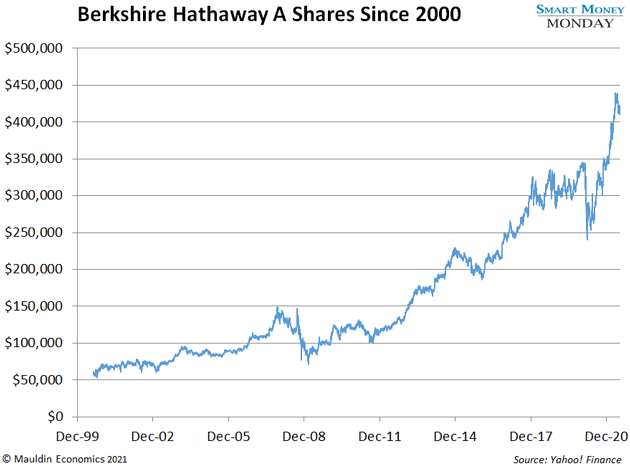 People call Buffett the “Oracle of Omaha” for his investing savvy, which has helped make Berkshire one of the world’s largest public companies.

When you think of it, you probably think of the household names it owns. Like See’s Candy, Fruit of the Loom, Dairy Queen, and Duracell.

They’ve all contributed to Berkshire’s success. But the bulk of its growth came from one sector: Insurance.

It owns GEICO, National Indemnity Company, and many other insurers. Altogether, insurance makes up roughly 25% of its pre-tax profit.

Berkshire follows a straightforward model here. It takes control of an insurance company and starts collecting insurance premiums. Then, instead of investing those premiums in boring securities like bonds, it puts them in higher-returning investments like stocks, real estate, and private businesses.

Fifteen years ago, insurance made up more than half of Berkshire’s earnings. That’s declined in recent years as Berkshire acquired railroads and other businesses. But insurance has been a key driver of the company’s success.

Here at Smart Money Monday, I share one great investment idea to kick off your week—often an “undiscovered” stock that most investors haven’t heard of yet. Today, I’ll share why I’m putting my money on Canada’s answer to Berkshire Hathaway.

Your average Canadian probably hasn’t heard of him, either. But experienced investors up north know him as the “Oracle of Toronto.”

That’s because Watsa’s company, Fairfax Financial Holdings (FRFHF), follows the same model as Berkshire Hathaway. It owns a slew of insurance companies. And it puts the premiums it collects in higher-growth investments.

Watsa founded Fairfax in 1985 as a small insurance company. Since then, he’s grown it into a $12 billion insurance conglomerate.

I flew in for its annual meeting in Toronto in 2016 and 2017. Both times, I left even more impressed with the company that Watsa and his team have built.

That kind of boots-on-the-ground research is routine for me. Whenever possible, I want to meet the people running the show. That means a lot of air miles. Especially because bottom-up stock picking, like we do here at Smart Money Monday, is a numbers game. You have to turn over a lot of rocks to win.

I’ve dissected over 1,000 stocks in my career. I have fat folders on each one. Of course, most never make the cut. And with many others, I have to sit and wait for the right opening… the right “buy signal.”

It takes pickiness. And it takes patience.

For starters, the stock is the cheapest it’s been since the financial crisis.

Then there’s the business in India…

See, Fairfax recently released its second-quarter earnings. And I found a critical piece of information buried in the press release.

One of Fairfax’s holdings, and Indian insurance company called Digit, just became a lot more valuable. Digit recently raised a ton of money from a handful of venture capitalists. This pushed its implied total value over $2 billion. But Fairfax still has Digit on the books at $540 million.

The change won’t show in Fairfax’s financials until it releases its third-quarter results. When that happens, it should increase the company’s book value by $61 per share. That’s an 11% increase.

Watsa has built his career on shrewd stock picking. It’s a big reason Fairfax has done so well over the past 35 years. And last year, he made a massive wager on the company he knows best—his own.

Insiders buy for one reason: They think the stock will go up. It’s fairly common to see insider purchases worth a few million dollars. But $150 million? That’s extremely rare.

Shares of Fairfax have already climbed about 40% since the purchase. But my research indicates they still have a lot more room to run.

Today, Fairfax trades at around 0.75X price-to-book. That is just too cheap for a high-quality insurance company.

As a reference point, Berkshire Hathaway trades at a substantial premium to its book value—around 1.4X. Were Fairfax to even approach a more reasonable 1.2X price-to-book, the stock would have nearly 60% upside from current prices.

I like the setup here. Fairfax Financial is a solid, well-established company with a formidable CEO. But its stock is still undiscovered by most investors.

I just saw the buy signal I’ve been waiting for. Consider picking up shares now while they’re still ultra-cheap.

P.S. We’ll take a closer look at Fairfax's robust business in India in the next issue of Smart Money Monday. In the meantime, you can write to me with any questions you have about insurance stocks at subscribers@mauldineconomics.com. I read every email that comes in.