The June CPI print came out last Wednesday. Prices have shot up 9.1% over the previous 12 months, as you can see in the chart below. 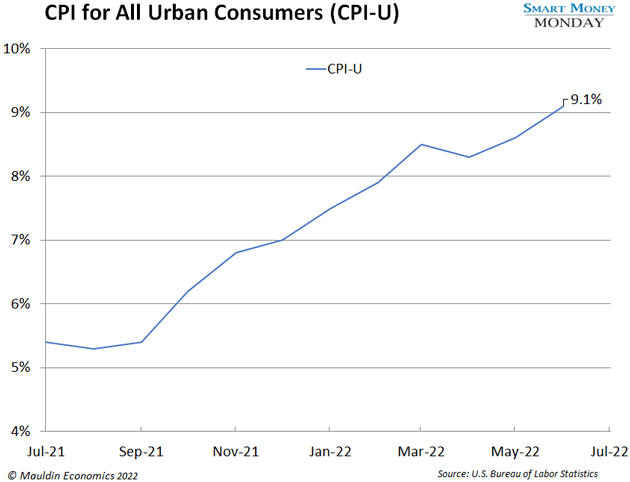 Meanwhile, the stock market has sunk 20%+ this year. Even “safe” stocks like Walmart (WMT) and Procter & Gamble (PG) are down 10%+. And bond yields remain low. It seems like nothing is working.

The Series I bond. It’s the closest you can get to a free-lunch inflation hedge.

I hope you bought the Series I bond when we first covered it here in January. If not, you can still take advantage of this low-risk government bond, which you buy directly from the US Treasury.

Unlike most government bonds, the interest rate on the I bond is directly tied to inflation. The rate has two components. The first is the fixed component, which the US Treasury sets. It’s currently 0%. And the second is the variable component, which is tied to the CPI-U.

The main thing to know is: When inflation rises, I bond rates tend to rise, too. If you buy I bonds right now, you lock in a 9.62% rate for the next 6 months.


You can only purchase $10,000 worth of I bonds each calendar year. But so can your spouse. And you can purchase another $10,000 for each of your children.

In other words, a family of four could put $40,000 a year in I bonds. At current rates, you would each receive $481 in interest for the first six-month period—or $1,924 for the household. Not bad for a government bond with virtually zero risk of loss.

But you can make some solid assumptions about what it will be when the September CPI-U data is released on October 13. Let’s run through some possible scenarios.

If you buy now, you get the 9.62% rate for six months. If inflation simply stays flat through September, you would get 6.13% for the subsequent six months. On a 12-month forward look, that’s an 8% return. However, I suspect inflation will continue to grow at a moderate pace. So, you will likely do even better.

I don’t see that happening in the next six months. But I suppose anything is possible. Fuel costs appear to be declining, although fuel is not a major part of the CPI-U. Also, the Federal Reserve will probably continue to hike rates, which should help temper inflation.

Say the September CPI-U comes in at 6%. That seems highly unlikely, but let’s say it happens. What then?

Well, you would still get the 9.62% rate for six months if you buy now. Then you would get 2.34% for the following six months. So, you’d still generate a respectable 6% return on your I bonds over a 12-month period.

Could I bond returns go negative? Fortunately, no. The lowest return you can get on your I bond is 0%. It doesn’t go negative.

One final note—if you redeem your I bonds before five years are up, you lose the last three months’ worth of interest. So, this is not the best place for short-term savings or cash you need for monthly bills. But it’s a fantastic spot for long-term cash holdings.

I still like I bonds as a safe place to park cash and earn a respectable return. You can purchase them from the US Treasury’s website here.